New details are emerging about efforts by the German military and by the Defense Ministry in Berlin to conceal the full extent of the controversial Sept. 4, 2009 bombing in Kunduz, Afghanistan, which saw a German-ordered attack result in the deaths of up to 142 people, many of them civilians.

SPIEGEL ONLINE has discovered that German military commanders and the Defense Ministry made more concerted efforts at covering up the truth after the air strike than was previously known. Confidential documents, which have been obtained by SPIEGEL ONLINE, show that the Defense Ministry set up a special working group composed of at least five officials to influence the NATO investigation into the incident.

According to the documents, "Group 85," as the task force was known, was charged with creating a "positive image" of the events in Kunduz through a targeted communication strategy in a bid to deflect criticism of the Bundeswehr, Germany's military.

The task force was set up on Sept. 9, just five days after the attack, and answered to Peter Wichert, a senior official in the Defense Ministry at the time. Two days later, Wichert took part in an initial videoconference with the group's members. Later, he made sure that the unit gave him regular updates on their work.

Wanted to Be Prepared

Wichert wanted to use the group's findings to brief top Defense Ministry officials close to then-Defense Minister Franz Josef Jung, who, after becoming labor minister in Merkel's new cabinet following elections last September, was forced to resign over the Kunduz affair. Wichert was aware that NATO investigators in Afghanistan would be critical of the Germans over the bombing and wanted to be prepared.

The Sept. 4 attack saw German commander Colonel Georg Klein call for a US air strike against two tanker trucks which had been hijacked by the Taliban. NATO rules of engagement in Afghanistan call for the presence of an imminent threat before such attacks can be launched, but given the fact that the tankers were stuck in a sandbank in the middle of the Kunduz River at the time of the attack, many have questioned whether the tankers posed a danger. Furthermore, Klein has been accused of ignoring indications that civilians were present at the site. The attack was the largest German-ordered bombing since World War II.

The existence and activities of the Group 85 -- along with testimony from both Wickert and former Bundeswehr Inspector General Wolfgang Schneiderhan -- were on the agenda of the first public session of the parliamentary inquiry into the Kunduz bombing on Thursday afternoon. Wichert and Schneiderhan were fired by Jung's successor as defense minister, Karl-Theodor zu Guttenberg, in November 2009 over the affair. The two officials will now have to answer questions regarding what they knew about the cover-up task force.

SPIEGEL reported shortly after the air strike that the Defense Ministry had tried to influence the NATO report on the incident -- something the Ministry always denied. The new documents provide proof that that was indeed the case.

The main task of the Group 85 was to find out, via the German member of the NATO investigative commission, just what the investigators were doing -- and how the report could be influenced to reflect German interests.

With that aim in mind, a member of the working group regularly telephoned with Lieutenant Colonel V., who passed on detailed plans regarding questioning sessions, the content of those interviews and the schedule for the completion of the report. The last point was of particular interest, as the date of the publication of the report was very significant for those members of the government who were involved in the affair. German national elections were due to take place on Sept. 27, just three weeks after the controversial air strike. A hard-hitting NATO report that confirmed the deaths of civilians and clearly criticized the Bundeswehr could have influenced the vote.

A week before the election, however, the German's spy in the NATO team had good news. They had "gained a week" due to an appointment being postponed. The report was therefore "not expected before Oct. 9" -- in other words, after the election.

Shortly before the completion of the NATO report, the Defense Ministry task force gave their man at NATO very specific instructions as to how he should perform his investigative duties. In the late afternoon of Oct. 6, as NATO officers in Kabul were working on the final version of their report, the task force held a lengthy telephone conversation with their Lieutenant Colonel V. A Defense Ministry official advised him "as a precautionary measure" that "if possible" the report should say that Klein did not go beyond his "discretionary authority" in his decision to order the bombings.

NATO is unlikely to be very happy about Group 85's spying activities. The German Defense Ministry always knew, via their man on the NATO team in Afghanistan, exactly what the investigators were doing, and even tried to influence the end result. The contents of the final report likely came as no surprise to the Germans.

Other parts of the German armed forces also took part in the obfuscation. The day after the attack, the German military police began investigations into the incident. They wrote a not uncritical report and reported various rule violations by Colonel Georg Klein, who had ordered the air strike. Those violations were later confirmed by NATO. The report led to the dismissal of Wichert and Schneiderhan, after the new Defense Minister Karl-Theodor zu Guttenberg read about it in the newspaper Bild, and caused a reassessment of the incident.

At the Bundeswehr's Operations Command, however, officials were pondering how they could best sell the military police report to NATO. In the end, they presented it to NATO in early October with a number of serious caveats.

The report, NATO was told, was full of "incomplete and superficial observations" and its author "did not have authorization" for the investigation. His findings did "not currently represent the national assessment." The Bundeswehr officials wrote in the cover letter to the report that they continued to assume that Klein did not go beyond his "discretionary authority" in his decision.

Which Documents to Hand Over

The dubious tactics of Group 85 go even further. In meetings, the group also discussed how it might be able to influence the judiciary. Documents indicate that, prior to a mid-September meeting with Dresden public prosecutors -- charged with determining whether the attack had violated German law -- members discussed which documents they should hand over. In order to demonstrate that the hijacked tankers presented an imminent threat to nearby German troops, it was decided to put together a list of previous Taliban attacks carried out using such tankers. In addition, they discussed quoting a warning issued by the Bundesnachrichtendienst (BND), Germany's foreign intelligence agency, in the hopes that the court would obtain the document itself.

Such practices are not explicitly illegal, but they clearly demonstrate the intention of Wickert and of the Defense Ministry to obscure the nature of the Kunduz attack. This mindset displayed by the former state secretary is also demonstrated in other documents relating to the bombing. On Sept. 10, for example, he urged that a preliminary NATO report (called an Initial Action Team report) not be made available to the German parliament, the Bundestag. The report, put together by a team of investigators, indicated that the Bundeswehr had committed numerous errors and, significantly, that civilians had been killed.

Wichert recommended that then Defense Minister Jung refrain from allowing parliamentarians a look at the report, which, even at that early stage, was quite detailed. He also added a bit of advice. "Mr. BM" (short for federal minister), he wrote, "It might be advantageous for your denial were you to gain the support of parliamentarians Merten and Siebert." The two were both members of the Defense Committee at the time, and were close allies of Minister Jung. 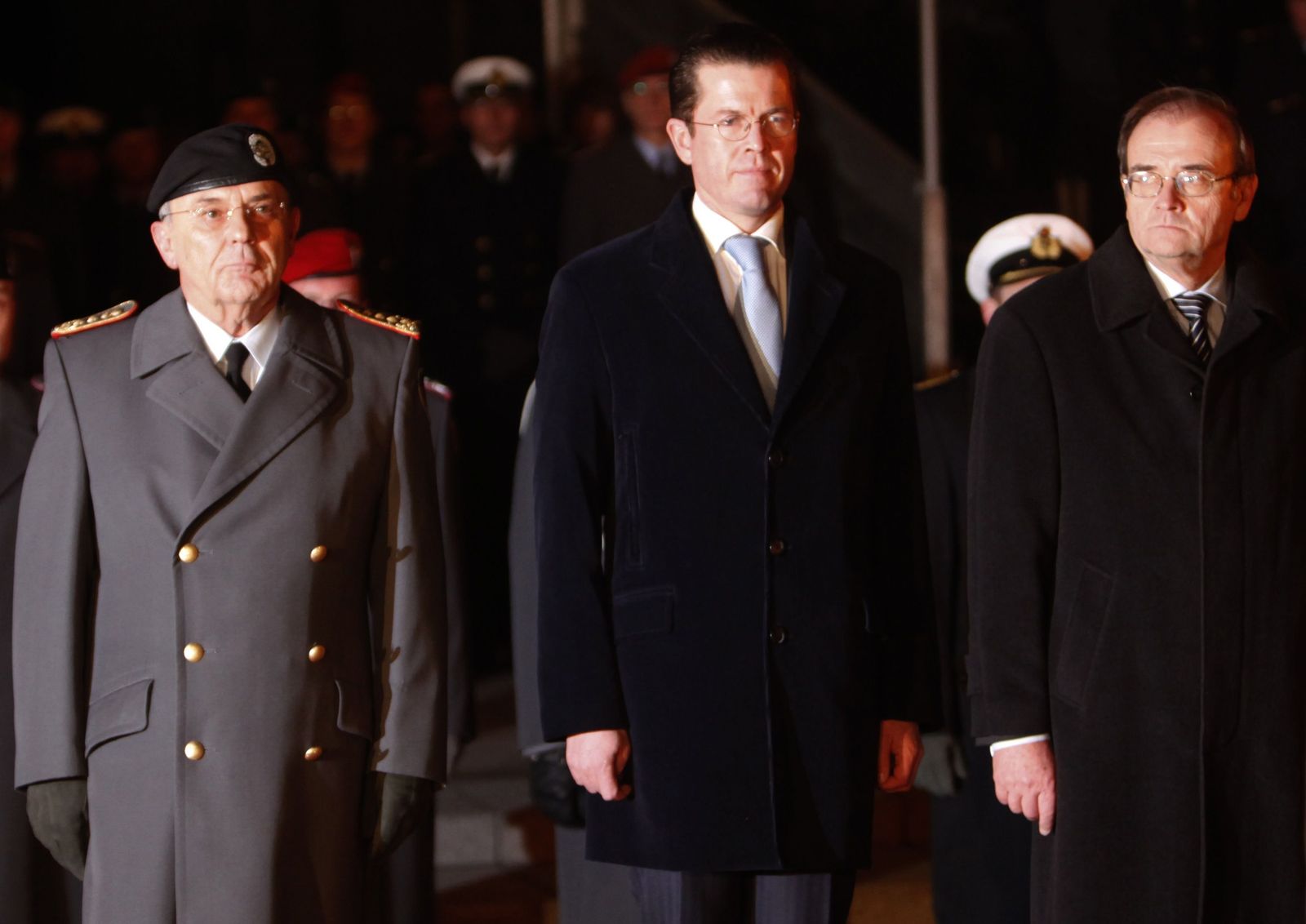