SPIEGEL: Minister von der Leyen, you recently advocated the introduction of a gender quota for the first time. Why now? You could have done so as family minister, a position you held from 2005 to 2009.

Von der Leyen: Because the time is right and because, five years back, is was still too trusting. For the last decade, there has been a voluntary agreement with the private sector. At the outset, I counted on that. But the agreement has been an abysmal failure; almost nothing has changed for women. Just like then, 97 percent of the people sitting on the executive boards of German companies are men as well as 90 percent on the supervisory boards. In fact, when it comes to the presence of women in positions of leadership in the German economy, we are near the bottom in international comparisons. We are now on par with India and trailing Brazil, China and Russia. We are also facing drastic shortages in skilled workers. As labor minister, I know that we can no longer allow ourselves to turn a blind eye to half of our talent.

SPIEGEL: What does that mean concretely?

Von der Leyen: We need to initiate a broad debate on the idea of female quotas, and then we must draw consequences. For this reason, the government plans to present draft legislation before the year is up.

SPIEGEL: What exactly would a gender quota law look like?

Von der Leyen: First of all: I am not demanding a quota that only pertains to one gender. Instead, I would like to see a minimum of 30 percent that applies to both. Neither men nor women should be under-represented on executive or advisory boards. Second, it's important that sanctions are part of the package; otherwise, it would just be window dressing. With their unique charm, the French have done exactly the right thing: If a supervisory board doesn't meet the quota, its decisions are valid, but the board election is invalidated and members aren't paid for attending the meetings. That hurts the advisory boards that resist installing female members, but it doesn't penalize the companies.

SPIEGEL: France and Norway have enacted gender quotas for supervisory boards, but not for executive boards. You, though, want German companies to replace a third of their senior management over the next five years.

Von der Leyen: You can't compare apples with oranges. Whereas Germany divides the managerial functions into a supervisory and an executive board, Norwegian companies only have boards of directors. And France has quotas for administrative and advisory boards. So Germany will have to find its own solution.

SPIEGEL: What kind of a time frame do you have in mind?

Von der Leyen: As I said, we will present a proposal this year. Within five years, supervisory board elections will have taken place at these companies. One can't apply for these positions; they are filled by appointment. Companies thus need to clearly be told that they have to consider women when making future appointments.

SPIEGEL: To earn a spot on the executive board, women first must have opportunities for advancement within the company. Yet they are under-represented in middle-management positions as well. Should the quota apply at that level too?

Von der Leyen: We're talking about a quota for supervisory and executive boards; that's the key. It is up to the companies themselves to figure out how to reach this goal. More than half of all university graduates are women. A lack of young professionals isn't the problem. If a company is forced to take a look at everyone when filling management positions, it will change the way it views its entire staff.

SPIEGEL: Should the quota apply to all companies?

Von der Leyen: No, we are talking primarily about publicly traded companies. In determining where the exact borders should lie, we have to base our discussions on the experiences of foreign countries. In France, the quota applies to companies that have more than 500 employees and that generate at least €50 million ($69 million) in annual sales. In Norway, it only applies to publicly traded companies -- yet it has still had an affect on small and mid-sized companies. There too, the number of women in senior management positions has grown significantly since the quota applying to the big companies was introduced.

SPIEGEL: Kristina Schröder, your successor as family minister, has continued to be a vocal opponent of such a quota.

Von der Leyen: She also has the issue on her agenda and is planning to present a multi-stage plan this spring. We agree that the debate must be moved forward at multiple levels.

SPIEGEL: Why do you think young women are often opposed to quotas?

Von der Leyen: I understand the position of young woman who say that we don't need quotas. Many of these women have had the experience that they have no trouble in school, at the university and early in their careers. They haven't yet learned that there are two career paths: the one for men with well-marked streets; and the one for women on unpaved roads that not even the navigation device knows. Most of the women who've made it into top management positions say that although they also used to be against quotas themselves, they now believe that women can't get by without them. I was the same. I used to sing the praises of the right to choose. But I've now learned that you sometimes need a law as a catalyst for change. For decades, there was absolutely no change in the number of men taking paternity leave. But within two years of making men eligible to receive state funds while taking paternity leave, the figure has increased six fold.

SPIEGEL: Some of the older men among Germany's conservatives are steadfastly against a gender quota.

Von der Leyen: You shouldn't underestimate my conservatives. We can debate things fiercely -- but we act in the end. The same thing happened when it came to the issue of expanding childcare programs. Plus, many men in the party have been influenced by the experiences of their own daughters. They are smart and well-educated. But often they move abroad with their husbands and children to have the careers that they can't have here.

SPIEGEL: Economics Minister Rainer Brüderle -- a member of the pro-business Free Democratic Party (FDP), the junior partner in the governing coalition -- believes the lack of women in senior management positions can be solely attributed to the paucity of all-day schools and childcare facilities.

Von der Leyen: There's no doubt that conditions must be right. My disappointment is more from the fact that, while both policy and society have made an enormous amount of progress on these issues in the last 10 years, the business world has simply stood still.

SPIEGEL: What do women contribute to the economy?

Von der Leyen: A woman isn't better, she is different. It isn't just the financial crisis which has made it clear that better and more sustainable decisions are made when there is a broader range of voices on senior management boards that not only keep an eye on the bottom line, but also give some thought to the world around them. The more homogenous a group is, the higher is the risk that they will make the wrong decision. Having a makeup of 97 percent men is very homogenous. Thus, a 30 percent minimum as an intelligent mix should go without saying.

SPIEGEL: What has been your experience when you, in your role as labor minister, speak with business leaders about quotas?

Von der Leyen: When I became involved in national politics six years ago, I never mentioned the word "quota." Whenever I even carefully hinted at the issue of women in leadership positions, I was told that policymakers must first do their jobs. Where are the childcare facilities? Where is the state-funded parental leave? Now, things are different. Society has changed. And executives know things can't stay as they are. But one thing continues to do the trick: In these kinds of meetings, when everyone is on the verge of falling asleep, all I have to do is say "gender quota." And suddenly, things liven up. 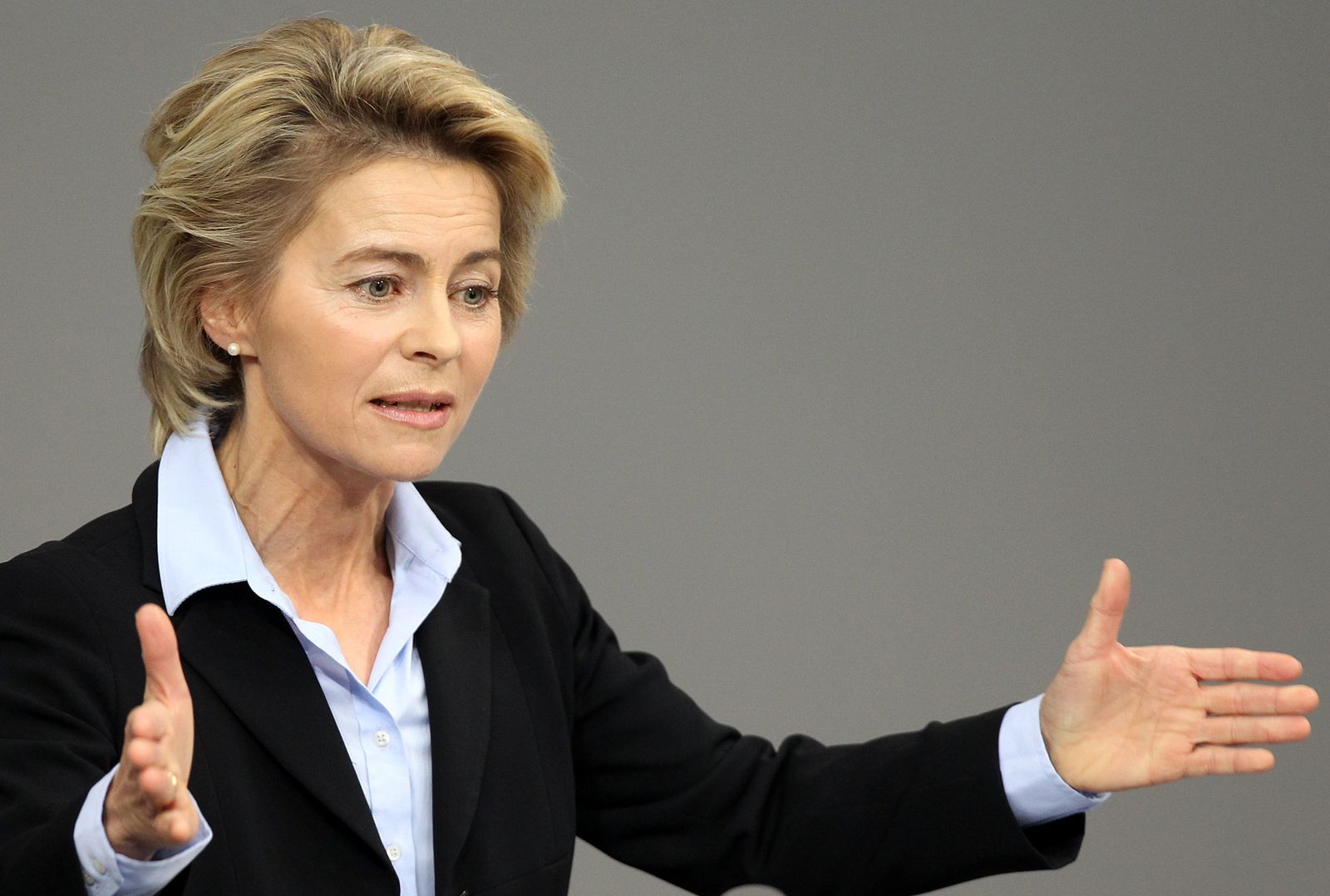 Ursula von der Leyen, 52, has been a member of Chancellor Angela Merkel's cabinet since 2005. "Germany will have to find its own solution."