The tone of the letter to the German Foreign Ministry may have been polite, but the content was pointed. Over five pages, Martin Jäger, the chief lobbyist for carmaker Daimler, explained why Berlin's export restrictions on trade with Iran place German industry at a serious disadvantage. 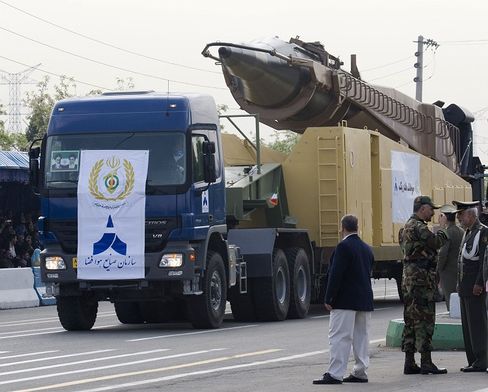 A truck carries a Ghadr-1 missile during a military parade in Tehran: Berlin is worried that German vehicles could be used to launch Iranian rockets.

According to Jäger, the German government's rigid position achieves only one thing, namely that goods being exported to Iran are no longer coming from Germany, but from countries like France and Sweden. Instead of Daimler, the companies that benefit from trade with Iran include Renault, Volvo and Iveco, which are able to sell their goods largely unencumbered by restrictive regulations. Jäger asked if that was really what the German government wanted.

The urgent letter, received shortly before Easter and, ironically, written by a former spokesman to Foreign Minister Frank-Walter Steinmeier, is a result of the German government's decision to ban the export of German-made semi trucks to Iran.

After the Iranian army had on several occasions publicly displayed trucks that had been converted into mobile rocket launchers, the German Economics Ministry in April 2008 issued a ban on the export of "trucks with three or more axles and a gross vehicle weight of more than 20,000 kilograms (44,000 lbs)" to Iran and Syria.

In the past, Daimler has sold up to 1,000 trucks a year to Iranian companies. The company's Actros series, assembled in the southwestern German town of Wörth, is seen as a showpiece of German motor vehicle manufacturing. A semi truck in the series sells for €80,000-100,000 ($110,000-138,000). As a result of the embargo, Stuttgart-based Daimler stands to lose millions of euros in annual sales.

The conflict over the semis is the most recent climax in a long-brewing conflict between the political and business communities. At issue is the difficult question of where to draw the line between foreign policy interests and economic freedom. Germany is not just the world's export champion, but is also a frontrunner when it comes to blocking exports headed for the Persian Gulf region. In addition to European Union sanctions imposed against the government in Tehran, the Economics Ministry in Berlin maintains its own blacklist with restrictions that significantly exceed those of other countries.

The government's justification for Germany's go-it-alone approach is that controversial exports could "significantly threaten Germany's foreign relations." Industry must "live up to its responsibility as part of society," argues Chancellor Angela Merkel. Merkel and Foreign Minister Steinmeier are determined not to allow Israel and the US government to accuse them of supporting a regime whose president, Mahmoud Ahmadinejad, has called for Israel's destruction.

The Israeli government, in particular, routinely increases its pressure on Berlin. What would the Germans say if Iranian missiles were fired from German trucks, an Israeli delegation asked pointedly during a visit to the Economics Ministry and Foreign Ministry last year.

The expansion of the embargo to include Daimler's semi trucks is also the work of the Israelis. About a year and a half ago, officials from the Mossad, Israel's intelligence agency, told authorities in Berlin about a three-axle special truck that the Syrian government had ordered for its military. The German government put a stop to the shipment and agreed to block future deliveries from the outset.

But now a decision by the Munich Higher Regional Court could force the government to change its hard line against Iran. The case brought before the Bavarian judges involved charges brought by the Federal Prosecutor's Office against Saeed S., a German-Iranian from the western state of North Rhine-Westphalia who had supplied companies in Tehran. The investigators believed that the recipients were working for the government-run defense industry. In a decision with far-reaching consequences, the Munich judges not only refused to allow the case to proceed, but also called the entire German export monitoring system into question.

The judges argued that the relevant passages in Germany's Foreign Trade and Payments Act are "incompatible" with EU law, and that the case for a "national special provision is not adequately presented." The law, they wrote, "interferes with equal opportunities for German businesses in the competition for foreign trade" and cannot continue to exist in its present form.

The judges also found fault with the German government for its fear of international criticism. If Germany insists on pursuing its own national approach on the issue, they wrote, it must explain convincingly what it means by a "significant impairment of foreign relations" and that simply making reference to German history is insufficient. The Munich judges revoked a warrant for the arrest of Saeed S. and ordered the €100,000 ($138,000) in bail money to be repaid.

The federal government views the Bavarian judges' 109-page ruling as potentially explosive. If the ruling prevails, says a senior government official, "the entire system of foreign trade law will be dead." The federal prosecutor's office has filed an appeal, and the case is now before Germany's supreme court, the Karlsruhe-based Federal Court of Justice. Its ruling is expected to serve as a landmark decision that will set a precedent for Germany's trade with dubious regimes.

German industry is also watching the legal tug-of-war with great interest. After year-on-year exports to Iran fell by roughly a third in January 2009, trade groups hope to see the courts relax sanctions.

Esterer, a medium-sized company based in the central German town of Helsa, would certainly like to see that happen. It has been manufacturing tank trucks for 50 years and would like to sell some of its trucks to Iranian carrier Iran Aseman Airlines. The airline plans to use the trucks at Tehran's Mehrabad airport, but aircraft operated by the Iranian air force are also based there. In addition, Iran Aseman provides aircraft maintenance services to the air force. Those two factors have prompted Germany's Foreign Ministry to voice its concerns over implications of the potential deal for German foreign policy. Although aircraft tank trunks are generally not on the government's black list, the diplomats fear headlines in the Jerusalem Post claiming that German tank trucks are refueling Iranian fighter jets.

Because of these concerns, the application Esterer filed with the Federal Office of Economics and Export Control (BAFA) in March 2008 has yet to be approved. The company has since filed a lawsuit against the German government in the Frankfurt Administrative Court. Esterer denies that the deal could constitute what Berlin fears is a "threat to foreign policy interests." The Frankfurt court is expected to rule on the case soon.

If the Frankfurt judges concur with their Munich colleagues, Daimler's prospects will likely improve. Just in case, the Stuttgart-based company has already applied for a permit to export its semi trucks to Iran -- despite the embargo.