SPIEGEL: Who or what is to blame for the nuclear catastrophe in Fukushima?

Hans Joachim Schellnhuber: The earthquake was merely the trigger. The crazy logic we apply in dealing with technical risks is to blame. We only protect ourselves against hazards to the extent that it's economically feasible at a given time, and to the extent to which they can be controlled within the normal operations of a company. But the Richter scale has no upper limit. Why is a Japanese nuclear power plant only designed to withstand a magnitude 8.2 earthquake, not to mention tsunamis?

SPIEGEL: Presumably because otherwise electricity from nuclear power would have been too expensive.

Schellnhuber: The entire affluence-based economic model of the postwar era, be it in Japan or here in Germany, is based on the idea that cheap energy and rising material consumption are supposed to make us happier and happier. This is why nuclear power plants are now being built in areas that are highly active geologically, and why we consume as much oil in one year as was created in 5.3 million years. We are looting both the past and the future to feed the excess of the present. It's the dictatorship of the here and now.

Schellnhuber: We have to stop constantly ignoring the things that are truly harmful to our society. This includes nuclear accidents, but also the prospect of the Earth becoming between 6 and 8 degrees Celsius (11 to 14 degrees Fahrenheit) warmer by the year 2200. Only when we have taken the possibility of maximum losses fully into account can we decide whether we even want a specific technology.

SPIEGEL: Up until now, you haven't been one of the vocal opponents of nuclear power.

Schellnhuber: But neither was I a supporter of nuclear power. My position was: Let's take advantage of the cost benefits of the existing nuclear plants to quickly develop renewable energy systems. It was my hope that something good would emerge from something bad.

SPIEGEL: How do you feel about the government's plans to temporarily shut down seven nuclear power plants in Germany?

Schellnhuber: It's the right thing to do. Something resembling what happened in Japan could also happen in Germany if one of the countless possible chains of unfortunate events were to occur. It's the unavoidability of the improbable. But the way the government approached the issue was not very beneficial for Germany's political culture.

Schellnhuber: Last year they decided that German power plants are safe. This allows for only two possible conclusions: Either the full truth wasn't recognized at the time, in which case it was bad policy, or they are reacting in a purely opportunistic fashion now, against their better judgment. That's even worse policy.

SPIEGEL: Are you worried that the government's new anti-nuclear course will lead to higher CO2 emissions because more coal will be burned once again?

Schellnhuber: Actually, I'm convinced that this is precisely what Chancellor Angela Merkel will not allow. Now everyone is starting to realize that society's entire fossil-nuclear operating system has no future and that massive investments have to be made in renewable sources of energy.

SPIEGEL: Do you feel that the government's abrupt change of course in relation to its energy policy is adequate?

Schellnhuber: No. It can only be the beginning of a deep-seated shift. The German Advisory Council on Global Change, which I chair, will soon unveil a master plan for a transformation of society. Precisely because of Fukushima, we believe that a new basis of our coexistence is needed.

Schellnhuber: We need a social contract for the 21st century that seals the common desire to create a sustainable industrial metabolism. We must resolve, once and for all, to leave our descendants more than a legacy of nuclear hazards and climate change. This requires empathy across space and time. To promote this, the rights of future generations should be enshrined in the German constitution.

Schellnhuber: For example, we have to stabilize energy consumption at a reasonable level. If we would finally start exploiting the full potential for energy efficiency in Germany, we could get by with at least 30 percent less energy input -- without being materially worse off.

SPIEGEL: How do you intend to convince society of the need for an upper limit to energy consumption?

Schellnhuber: It can only be achieved with cultural change. To that end, society needs to have an entirely different discussion than before. This sort of change is one of the most difficult things I can imagine.

SPIEGEL: Belt-tightening hasn't exactly been popular in the past.

Schellnhuber: All it costs is a few percentage points of economic output to turn away from the dangerous path that would otherwise lead to more nuclear accidents and unchecked climate change. Green investments would only delay the growth of affluence between now and the year 2100 by six to nine months. Is that really too high a price to pay?

SPIEGEL: Why is it that your messages haven't been all that well received until now?

Schellnhuber: I'm neither a psychologist nor a sociologist. But my life experiences have shown that the love of convenience and ignorance are man's biggest character flaws. It's a potentially deadly mixture. 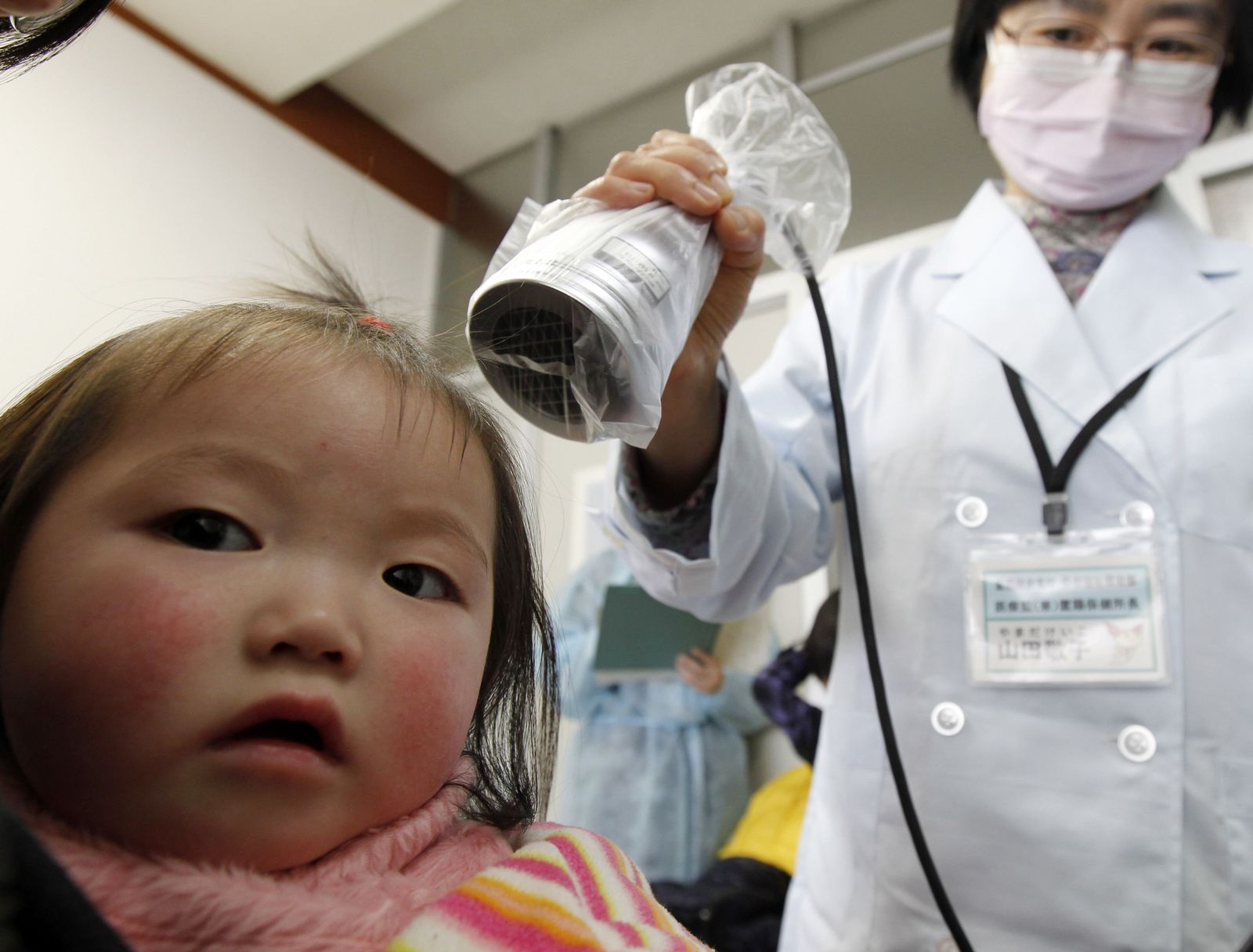 A doctor screens a Japanese child from Fukushima prefecture for signs of radiation.