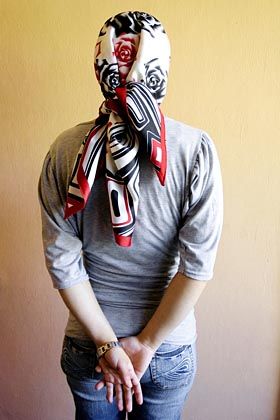 A Turkish-German woman threatened with murder by her husband.

The little girl with the pigtails stands at the window staring into the green courtyard. She wants to go outside with her mother to play. "No," the young woman says, "it just rained."

In truth, the sun was shining on the major western German city last Wednesday. But the mother is trying to shield her four-year-old daughter from the real reason they've spent weeks hiding in this apartment. They don't answer the telephone, they don't go to kindergarten and they don't answer the door to the apartment, which is owned by an acquaintance. The mother is scared, deathly afraid. Her Turkish husband has threatened to kill her because she has fallen in love with another man.

A number of regulations make it relatively easy for violent family members to find out where the threatened are staying. And the procedures for entering into witness protection programs for the few who dare to testify against family members who commit battery or murder have proven to be overly complicated and bureaucratic.

The path of suffering for the daughter of a Turkish guest worker began when she fell in love with a German classmate and people caught wind of their romance. During a holiday in Turkey, her mother told the then 17-year old girl that she was to marry a Turkish man so that she "wouldn't turn into a slut."

The young woman resisted for four months but finally she agreed to marry her cousin who she did not love -- "because I wanted to come back to Germany," she says. At the time she did not have a German passport, just residency papers. And the papers would no longer be valid if she spent more than six months abroad. By the time she arrived back in Germany she was already pregnant.

"I Will Kill You"

Her new husband followed her to Germany and soon began to beat her -- repeatedly hitting her in the face with his fist. She endured this treatment for years until she met her new boyfriend in 2007 and filed for divorce. Her husband beat her brutally, breaking one of her teeth and then saying something he repeated in front of relatives: "I will kill you because you have dragged my name through the mud." She fled to stay with a friend.

The young mother contacted the Berlin group "Hatun & Can," via the Internet. The organization has been providing threatened women with advice and shelter since the murder of the Turkish-German woman Hatun Sürücü in 2005. However, before she can begin her new life far away, her lawyer Gülsen Celebi is fighting to ensure she gets sole custody of her daughter. Otherwise German authorities are obliged to tell the father where his child lives.

These are the kinds of regulations that make the work of those like Celebi who want to help these women so much harder. The fact that many of the victims are often dependent on state welfare means that battles with local governments have to be fought before they can be provided with safe accommodation in other cities. Officials often resist allowing them to move, so that they can avoid forking out more welfare payments. And if women with children want to file for divorce, the papers have to include their place of residence. That is the law -- despite the fact that by doing so they reveal where they are staying. "It's better to stay married then die," is Celebi's advice in those cases.

Back in 2007 the ex-husband of another of Celebi's clients, a man who was know to be violent, was allowed to walk into the custody hearing in Mönchengladbach. There was already a warrant out for his arrest, and Celebi asked the judge for help. He allowed the man to walk, and only minutes later, Erol P. shot and killed his wife and daughter on the street.

Nourig A. had also hoped in vain for state protection. The 36-year-old Kurd from Syria had only reported her sister's murder in 2004 because she had had faith in the witness protection program. Today she says she would "never again," make a statement to the German police.

One morning back in 1994 her father brought her into their living room in Bad Godesberg to show her the body of her younger sister lying on the sofa. Two cousins were standing next to the young woman who had been strangled because the family thought she had been out gallivanting too much. "If you live like her, then you will die too," they warned her.

The young woman was so afraid she said nothing for 10 years. In the end the young medical student could no longer stay silent and she brought charges against her relatives. A court in Bonn found her father guilty of murder and sentenced him to eight years in prison, but she still fears her family's revenge. The police had promised to protect her and to provide her with a new identity, but the bureaucratic obstacles piled up and it never happened.

Her lawyer, Reinhard Birkenstock, now says that his client was handled in a "downright cynical" manner. He argues that there were never any plans or prospects for the witness. If the state wants to prevent and solve these types of murders in the future, says Birkenstock, then "the witness protection program urgently needs to be reformed."