Like few other people, Udo Holtmann embodies the greatest defeat in German domestic politics of the past decade. Holtmann, who died in 2006, was a burly man from the western German city of Oberhausen and a printer by trade. He also had a successful political career in Germany's far-right National Democratic Party (NPD). He was head of the party's state chapter in North Rhine-Westphalia and editor in chief of the party's national newspaper Deutsche Stimme ("German Voice"). He eventually worked his way up the ranks to become number two on the NPD's national executive.

But Holtmann had another role, too. He also worked as an informer for the Office for the Protection of the Constitution, Germany's domestic intelligence agency. For decades, he provided the agency with information about the party's internal workings and received a considerable amount of money in return. But ultimately the spy did not help the intelligence agency in its task of protecting democracy and the German constitution. Instead, he was actually protecting his own party.

An attempt by the German government to ban the party in 2003 failed precisely because of the presence of paid informers working for the intelligence agency in the NPD's leadership. Germany's Federal Constitutional Court, the country's highest court and the only body that can outlaw a political party, rejected the ban attempt, arguing that there was a risk the party's policies had been shaped in part by people working for the state.

The collapse of the legal proceedings was a huge embarrassment for the national and state-level interior ministers, who are responsible for the national intelligence agency and its state-level offices. For their part, right-wing extremists celebrated the state's failure.

Pressure to try again to ban the party has been growing in recent months, following the discovery of the Zwickau cell of murderous neo-Nazis in November 2011. The revelations that the trio, who are suspected of murdering at least 10 people between 2000 and 2007, had links to the NPD have fuelled a political debate on banning the party.

But the German government is determined that a fiasco like the one in 2003 cannot be repeated under any circumstances. The national and state-level governments have now reached an agreement that all informers in the NPD's leadership will have to be "deactivated" before a new ban is attempted. On Thursday of this week, the interior ministers will meet to discuss a new attempt to ban the party. One week later, on March 29, the governors of Germany's 16 states will reach a decision on whether to proceed.

There are currently many indications that the state will indeed risk a second attempt to prohibit the far-right party, whose current membership is around 5,900. But despite what many of the interior ministers are saying publicly, such an effort is beset by a variety of risks, even if links to the high-level informers are cut. SPIEGEL has learned that the requirements for a successful proceeding to ban the party are higher than is being publicly acknowledged -- perhaps too high. This is made clear by a confidential list of criteria that the ministers have drawn up based on the Constitutional Court's 2003 decision and another ruling by the European Court of Human Rights in the same year, which strengthened the rights of political parties.

According to the approximately 40-page-long document, which has been seen by SPIEGEL, the state could be forced to take a step which has previously been considered an absolute taboo by the intelligence community: revealing informers' real names. The Constitutional Court could require the disclosure of information "up to and including the naming of sources," reads the confidential assessment. It could also "force" informers to testify personally in Karlsruhe, where the court is based.

Among the interior ministers, disclosing the identities of informers is highly controversial. During a conference call with the interior ministers of states governed by the conservative Christian Democratic Union and its Bavarian sister party, the Christian Social Union, last week, German Interior Minister Hans-Peter Friedrich said that the issue of the disclosure of real names would probably be the sticking point. One has to "think about how it could end," warned Friedrich, who sounded noticeably reserved about a possible ban attempt.

Protests from the conservative state-level interior ministers followed promptly. The protection of informers has to take priority, argued the interior minister of Lower Saxony, Uwe Schünemann. "Real names are not to be revealed in Karlsruhe under any circumstances," he said.

His Bavarian counterpart Joachim Herrmann took a similar view. "We cannot reveal (the identity) of covert sources," he said.

Rhineland-Palatinate Interior Minister Roger Lewentz, however, takes a different position. The center-left Social Democrat said that he could not imagine that "a ban would fail because of the intelligence agencies' sources." If necessary, Lewentz said, he would tell the court the identity of the people who had provided information. There would, however, have to be guarantees that "the names did not become public and that the informers would not be in personal danger."

Another point of contention is the question of whether it is just informers in the leadership who would have to be shut down, or if spies on lower levels need to be dumped too. The criteria list explains that individual informers who are not part of the top leadership might also have to be deactivated "solely because of their relative influence within the party." That could include opinion leaders or the heads of important district-level organizations, says Holger Stahlknecht, the conservative interior minister of Saxony-Anhalt. "We need to clarify that," he adds.

The Problem of Anonymous Texts

Intelligence officials assume that ties will probably have to be cut with over 20 of the current total of around 130 informers associated with the party. It is undisputed that, in addition to the NPD itself, informers in its youth wing, the Young National Democrats, the Ring of National Women, a far-right organization for women, and an umbrella organization for local politicians would also be affected.

But the influence of the informers also extends to the evidence that is supposed to prove to the Constitutional Court judges that the party is taking an aggressive stance against the democratic order -- one of the preconditions for a ban. The ministers warn that public statements made by NPD politicians who are also informers have "very limited value" and should not be included as part of a legal case.

That position is motivated by a gaffe on the part of the state in the first attempt to ban the NPD. That time around, the government tried to document the NPD's allegedly anti-constitutional position with a statement from none other than Udo Holtmann, the informer.

According to the list of criteria, the court should be informed of "the origin of the material submitted." But sometimes that is easier said than done. For example, what should the state do in the case of anonymous texts, online forum postings published under a pseudonym or speeches that were written for the party leadership by someone else? In those instances, it is hard to rule out the possibility that the texts could have been written by a paid informer, thereby meaning that the state could have influenced the direction of the party, as some of the judges criticized in 2003. Even if the intelligence agency double checks every single piece of paper they intend to submit as evidence against their list of informers, it's hard to prevent the eventuality that "contaminated" evidence could end up on the judges' desk.

Unlike most of the state governors who are calling for a new ban proceeding, Interior Minister Friedrich is well aware of these problems. He had his staff brief him in detail on the contents of the secret criteria list. "These jointly developed criteria for a successful ban petition must be adhered to," he says.

Friedrich is not sure if the conditions can actually be met. In any case, he wants to avoid a humiliating defeat at the Constitutional Court like the one former Interior Minister Otto Schily suffered in 2003. "We must not, and we will not, take any risks in relation to a ban petition," he says. But it is hardly possible to take the case to the Constitutional Court without running the risk of failure.

Friedrich plans to discuss the issue with Chancellor Angela Merkel in a private meeting this week. The minister will present his concerns, but ultimately he will follow the chancellor's line. If Merkel is in favor of a ban attempt, then things could happen quickly.

"We want to deactivate the informers in leadership positions as early as April 1 and start collecting material," says Holger Stahlknecht, the interior minister for Saxony-Anhalt. "The evidence could be presented in October."

The secret document also describes what the next step could be. A "political decision" is required, it reads. In other words, the ministers have to consider just how large the risk they are prepared to take is. Stahlknecht sums up the dilemma pithily: "The level of enthusiasm (for a ban) cannot exceed the unemotional willingness to listen to reason." 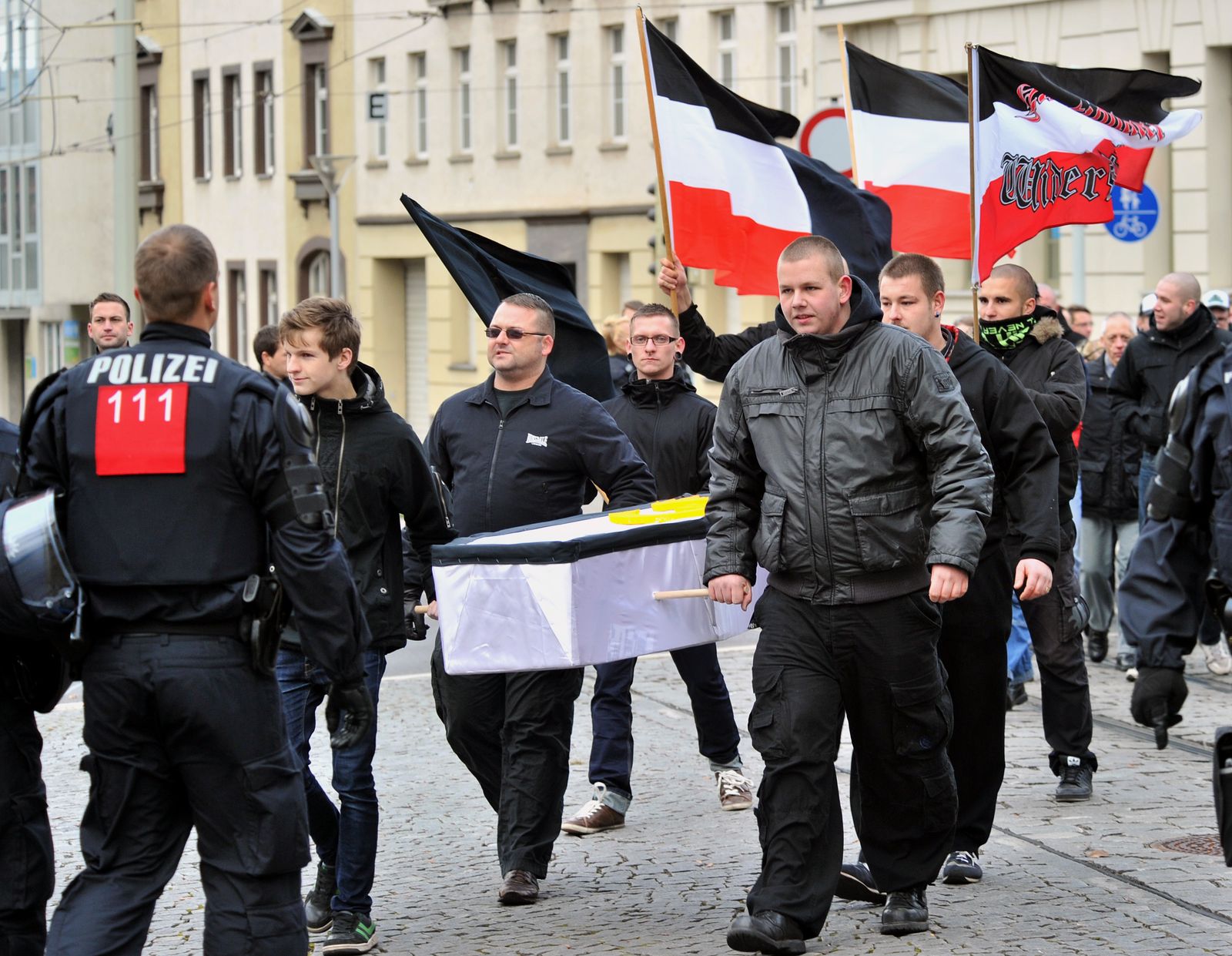 An NPD demonstration in the eastern German city of Gera in December 2011.