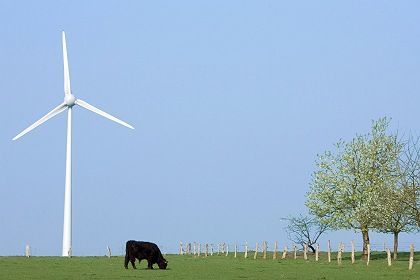 Not as idyllic as the image may suggest: German courts are starting to deal with increasing numbers of wind farm related cases.

It's an offense not mentioned in the bible or the statute books. But in a broader sense it is about theft, even when the booty itself is invisible. But it is still a major problem for the German legal system, including a court in Leipzig that is currently hearing a case involving a dispute between the operators of two wind turbine facilities. Who owns the wind?

The parties in the dispute are the owner of a wind farm in Deliztsch in the eastern German state of Saxony and a businessman, who wants to set up a bigger wind farm in the immediate vicinity.

The crux of the case is earnings. When two wind turbines are located too close to one another, one often falls into a slipstream. The propellers in the first wind farm decrease the wind pressure hitting the rotor blades in the second wind farm located in the slipstream. "This wind theft naturally affects profits," Leipzig lawyer Martin Maslaton says, justifying his client's complaint.

This also reduces the amount of electricity that can be produced. According to the plaintiff's own calculations, there has been a 15 percent drop in income. Over the lifespan of a wind farm, that could result in losses of several hundred thousand euros.

In recent years wind turbines have become a new fixture in German courts, with legal disputes over issues such as the shadows cast by the turbines, the noise or the destruction of the landscape. But the current dispute over the ownership of wind is even more fundamental.

Wind is legally a "free good" but, as soon as it hits the 90-meter-long rotor blades on German soil, it is covered by the law -- by state zoning regulations and the local construction laws.

Just as homeowners appreciate an unspoiled view, location is a particularly valuable asset for wind farms. Usually the turbines are located at the western edge of a windy area for maximum efficiency: it is here that, according to weather statistics, the most wind occurs throughout the year.

The distance between the turbines is set by the respective building ordinances. "And in each federal state, this is determined by different rules," says Ernst Erich Warnecke, a lawyer who specializes in this field. Some, such as Schleswig-Holstein, have set a distance of five times the rotor's diameter as the basic rule. Other states, such as North Rhine-Westphalia, calculate a distance of eight times the rotors in the prevailing wind direction.

These laws leave a lot of room for legal disputes -- and trouble is brewing across the country, from Bavaria to Lower Saxony. Neighboring villages are bickering with each other because they are building wind farms along their common borders. Owners of farms are suing one another for alleged inaccurate land surveying and illegal construction, and sometimes, investors' donations to a community will influence the decision of where the turbines are to be situated.

Sometimes the dispute only arises once the wind turbine is in operation. For example, a court in Münster has found that a neighboring turbine can cause damage that isnt even measured in kilowatts. The plaintiff claimed that a new wind farm upstream had been passing on the wind in irregular quantities. The air turbulence, he claimed, caused his own rotors to vibrate -- and his turbines to totter dangerously.