He seems to relax. There was a crowd outside the bar, packed into Berlin's KulturBrauerei for the mid-September Radio Multikulti festival, and the way to the small upstairs table had been full of random greetings and handshakes.

Özdemir became a political cult hero in 1994, when, at 28, he became the first person of Turkish descent to enter Germany's parliament, the Bundestag. Now an influential member of the European Parliament in Brussels with three books and countless public appearances under his belt, the charismatic politician recently acquired the aura of a future titan within the country's influential Green Party. Nine days earlier, Volker Ratzmann withdrew from the November 14 race for the party's top leadership post, clearing the way for Özdemir to claim another high-profile milestone as the first member of an ethnic minority to lead a German national party.

Drink in hand, wearing jeans and a grey blazer along with his trademark beatnik sideburns, and surrounded at last by his wife and some friends, he now takes the opportunity to give a brief history of the Turkish term for "cheers."

It started when the American military occupied Istanbul after World War II, he explains over the rock music from the stage below. "Serefe" derives from the English "sheriff" and is used in semi-formal situations. Best friends or brothers, meanwhile, would say "deputy," and you use the deferential "marshall" with people like your boss.

"By the way," he says after taking a few sips. "Don't ever tell that to a Turkish person. Because I just made it up."

Özdemir, who was born and raised in conservative Swabia, a region in the southern German state of Baden-Württemburg, has riffed on his role as de facto spokesman for the Turkish people since the days when schoolmates approached him and asked questions about things like how Muslims drink. (The response then was an elaborate ritual that involved sprinkling the drink in everyone's face, in the spirit of Islam's call for sharing. Özdemir is a self-described secular Muslim.) Known for his impeccable High German, he also speaks the Swabian dialect, something he likes to use as a "friendly provocation" to those who consider him a foreigner.

But his Turkish roots help to define him as well. The son of guest workers, his books have titles like "Currywurst and Döner," "I am a Native" and "Turkey." He decided to run for the national parliament after a 1993 arson attack in Solingen killed five Turkish women and children, he says, "in order to help symbolize that things are changing, just by having a foreign-sounding name, a name which doesn't sound like a typical German name."

Özdemir got his start in environmental politics, but upon his arrival in the Bundestag he was tasked with integration and immigration. Özcan Mutlu, a Green member of the Berlin parliament, calls that political portfolio "box with a tag: Migrant/Integration issues" -- a political purgatory to which ethnic Turks have long been confined. Özdemir has managed to escape it by establishing himself as decidedly more than just a Turkish spokesman.

"If I were somebody who stood as a symbol, who wasn't really competing, it would have been maybe easier. We had that type of candidate for a while," Özdemir says. "That has changed with my generation, because we don't want that. We want to be where the others are. And we want to compete."

'You Are always the Turkish One'

Of the 82 million people living in Germany, the 2.5 million ethnic Turks form the largest minority. Since first arriving as guest workers in the 1960s, however, they have remained estranged from mainstream society. This holds true in politics, where just five of the Bundestag's 613 members claim Turkish heritage and the number of Turks holding elected office throughout all levels of government -- including local, state and national -- typically hovers around 80.

Those who do get elected find what Lale Akgün, a Social Democrat in the Bundestag, describes as a "glass ceiling" once in office.

"This society thinks very ethnically," she says. "You are always the Turkish one. So it's very difficult to be a normal member of a party."

Mutlu, who oversees education, recalls struggling to convince his Green colleagues that politicians with immigrant backgrounds could address things other than migrant issues. He says Özdemir faces the same problem with the general public, which he believes remains hesitant about having ethnic-Turkish politicians in positions of power.

"He has to convince many, many people that he is the right person," Mutlu says. "There are still some people who don't agree with the idea of having a person of Turkish descent running for chairman."

But it's not just voters who need to be convinced.

After he decided to run for his party's chair, Özdemir's staff started a Facebook group called "Yes We Cem." It has 293 members. (Barack Obama's, by comparison, has over 700,000.) Grassroots campaigns just aren't the same in Germany.

Unlike in the United States, in Germany it is party officials who determine who makes it onto ballots. Writer Mely Kiyak, whose book "10 for Germany" details the obstacles facing Turkish politicians, including Özdemir, believes ethnic minorities are kept out of direct elections and are buried near the bottom of party lists that together fill the seats in parliament.

"This is the problem that every member of every party from left to right is talking about. And the reason the parties are giving to us is this: We don't think with your name and your look we've got a chance to win many votes," she says. "In Germany you cannot decide to get power. There always has to be someone who gives you power."

A Failed Effort to Return to the Bundestag

A painful reminder of how tough it can be for a politician to take his fate into his own hands came for Özdemir last Saturday, when a party vote in Baden-Württemberg ended his bid to return to the Bundestag. In a political system that stresses party over personality, a relatively fresh face is unlikely to enjoy such a quick and easy ascent. 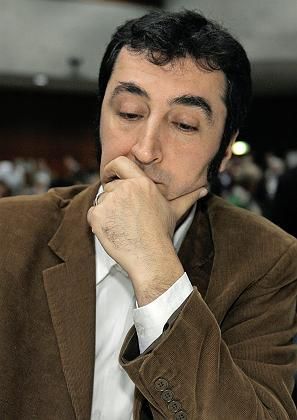 Thought to be a shoe-in, Özdemir suffered an embarrassing defeat in a state party vote on Saturday.

Traditionally, the female and male co-chairs of the Green Party have been restricted from holding seats in parliament. That rule, however, appeared to have eased after Claudia Roth -- who is expected to continue as her party's co-chair alongside Özdemir -- topped the list of candidates in Bavaria in 2002, claiming the seat she had vacated one year earlier. Özdemir seemed all but certain to win a spot on the ballot for federal elections in his home state.

There are grumblings that some purported allies pulled their support, wary that Özdemir was becoming too big a star. Kiyak believes the snub had more to do with jealousy and an old-fashioned power struggle than with race.

"The older generation is like a club, and he is new," she says. "They don't want him to be a member."

Özdemir vowed on Monday to continue his push to become party chair and remains unopposed in the race. And despite his setback in Baden-Württemburg, his rise to party chief will also mark his political comeback on Germany's national political scene after his abrupt departure six years ago.

Despite easily winning a third term, Özdemir left the Bundestag in 2002. He had been tangled in a minor scandal, along with several other politicians, for using bonus miles earned while on government business for private trips, and was then caught in a more serious bind for borrowing money from a public relations mogul at friendly rates. It may have provided his best chance to break free of the migrant mold, which persisted even after he spent his second term as party spokesman on domestic affairs, a time during which he worked to liberalize naturalization laws.

"Cem was always viewed as a migrant politician who speaks on migrant issues," says Adam Hunter, who ran the European Parliament campaign Özdemir launched after spending a year as a fellow at the German Marshall Fund in Washington, DC. "He didn't want to be type-cast."

Özdemir returned to the political fray with what Hunter calls a "full-time, national campaign" in the American style -- a schedule packed with speeches and public appearances.

"We went everywhere," Hunter, now based in the US, says. "I don't know any other candidate of any party who did that."

In Brussels, while maintaining his focus on immigration and integration, Özdemir has also served on the European Parliament's Foreign Affairs Committee and developed into a respected voice on international issues. Hunter says his combination of foreign policy and migration credentials makes him the "obvious candidate" for the party chair.

Even in his current capacity, Özdemir's roots have been used against him. Supporting Turkey's admission to the European Union brought doubts about his motivations from some, for example, while criticizing Ankara's human rights record had led others to label him as a traitor. Özdemir calls it being "German inside the Turkish community and Turkish inside the German community," and he believes it lends him credibility.

Yet he has worked to keep ethnicity in the background of late. On sensitive issues like education, where students with migrant backgrounds struggle mightily to keep up, Özdemir has repeatedly stressed class over race. He plans to make education reform a signature issue for the Greens under his watch.

"If you look to my public statements since I decided to run for party leadership, it's not a coincidence that I not only focus on immigration and integration issues but also put education at the forefront, not to forget environmental and social questions and, of course, foreign policy. It's important that people understand that if this is going to be a party leader, then he's got to be able to address different topics in a qualified and convincing matter," says Özdemir.

"The second message comes with the first. Just the very fact that I have a Turkish name obviously is a message in itself."

During his stint in the Bundestag, Özdemir worked to reach out to other minority groups. He believes he made some gains, in part because even those who don't share his views often feel invested in his career. As he tried to order his drink at the bar in Berlin, an African man emerged from the crowd and all but embraced him. Connecting with new voters could pay dividends for the Greens in next September's elections, which are expected to be extremely close.

"The number of German voters with migrant backgrounds is increasing -- not only Turks, but other communities as well. I don't see a reason to give that piece of the cake to other parties," Özdemir says. "It makes a difference whether you have them or you don't. But I don't want to limit myself to them."

To accomplish his next feat, then, he must continue the delicate balancing act between his German and Turkish identities. As long as the two can't be considered one and the same, it might be his only choice.