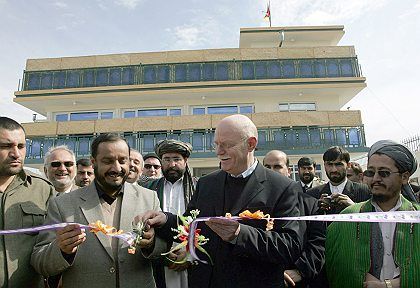 The unrest in Germany's Social Democratic Party began in earnest about two weeks ago. During a vote on whether to deploy German Tornado reconnaissance jets to Afghanistan, one-third of the left-leaning party's delegates cast their votes against the proposed expansion of the German military's mandate. The split on the foreign policy issue underscored the perils that face Germany's governing coalition, which pairs the SPD with Chancellor Angela Merkel's Christian Democrats. Foreign policy is one of the few areas where the parties have generally sung in harmony since Merkel came to power.

The vote signified growing unrest in Germany about the country's six-year deployment in Afghanistan. At almost every recent SPD party event, questions have persisted about the mission. What is Germany doing in Afghanistan? Why is Germany waging America's war? And why is it that Germany can only afford €20 million ($26.5 million) per year in development aid to Afghanistan when the cost of sending Tornado jets to the country for only six months will cost a whopping €35 million?

Party members have openly expressed their growing dissatisfaction with the uncertain aims in Afghanistan, saying they want SPD policy to reflect its identity as a party of peace. It's a sentiment that evokes former SPD Chancellor Gerhard Schröder's adamant stance against the Iraq war. Though the economic reforms Schröder pushed through remain deeply unpopular, broad support remains within the party base for his anti-war stance and for his having stood up to the United States.

At one party meeting, Renate Schmidt, a former cabinet minister in Schröder's government, warned that Germany "threatened to slide into a second Vietnam." And the party's foreign policy expert, Rolf Mützenich, said Germany had "fallen to a low level in Afghanistan." Slogans like "We are the party of peace," can be heard in many quarters.

And the unrest isn't just limited to the left-wing fringes of the party -- it has also arrived at its core, even within the party's parliamentary faction. During the vote two weeks ago, 69 SPD members -- close to one-third of its representatives in the German parliament, the Bundestag, voted against deploying the jets.

While this alone isn't enough to endanger Merkel's government, it has unsettled SPD leaders and it has left them uncertain about how to respond.

German support for the Afghanistan mission is falling.

The issue is compounded by the fact that a new poll shows the majority of Germans calling for a withdrawal of German troops from the region. A TNS poll conducted for SPIEGEL last week revealed that 57 percent of those polled -- many of whom also support the SPD -- believe German troops in Afghanistan should be removed as soon as possible.

As part of its efforts to promote the SPD as a peacenik party, members of the base want party leadership to lay out a clear plan for the future of Germany's deployment in Afghanistan and to express decisive opposition to the American plans to install parts of its new missile defense system in Poland and the Czech Republic. It's a project that Schröder recently criticized as "politically dangerous," a "counterproductive attempt to encircle Russia that in no way represents European interests."

The issue is creating a dilemma for the Social Democrats. If the SPD's leadership gives in to pressure from the party base, it could severely weaken Social Democratic members of Merkel's cabinet -- including Foreign Minister Frank-Walter Steinmeier, who has already been weakened by investigations into German intelligence cooperation with the US during the Iraq war as well as efforts to keep wrongly accused terror suspect Murat Kurnaz, a longtime inmate at Guantanamo, from returning to Germany. An open conflict with the Christian Democrats could bring a quick end to the fragile coalition government and raise serious questions about the SPD's ability to govern.

At the same time, the idea of positioning itself as a peace party remains an attractive prospect -- especially in the wake of controversial reforms that have seen the center-left SPD help push through such unpopular measures like a hike in the retirement age by two years. "This is an issue of identity for us," says SPD floor leader Peter Struck, who expressed concern that the "dissatisfaction within the party and population regarding the Afghanistan deployment is growing."

Still, party strategists have yet to come up with any solutions that would meet the demands of its Christian Democratic partners and Germany's NATO commitments while at the same time keeping the party core happy. The only certainty within the party is that unilateral withdrawal of German troops from Afghanistan would be impossible.

"Even the peaceniks know that," says Struck. 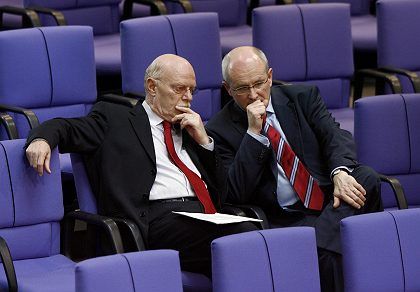 SPD floor leader Peter Struck discusses the "Tornado" vote in German parliament with his conservative counterpart Volker Kauder. A number of SPD delegates elected not to support the mission.

Nevertheless, the Afghanistan mandate expires this fall and a new plan will have to be voted on in the Bundestag. With so many SPD members opposed to further involvement in Afghanistan, difficult political wrangling is anticipated. So far, Steinmeier's Foreign Ministry hasn't released any concrete plans on the future of Germany's deployment. Diplomats say the government must find more money for Afghanistan and that it must be funnelled to reconstruction projects with high visibility -- also in the dangerous southern part of the country. They are also calling for a plan that will provide a clear roadmap for ending the Bundeswehr deployment.

There is also displeasure in the party base over Germany's development aid in Afghanistan, which many argue is lacking. In 2006, the country provided €80 million in bilateral aid. Although that figure will be increased by €20 million this year, critics argue that is will do little to significantly change life in a country that is almost twice as big as Germany.

"We're going to have to inject more money," Struck says. Meanwhile, the party's defense expert, Jörn Thiessen, says the future focus of the German deployment in Afghanistan must "clearly lie in civilian development."

In two weeks, Kurt Beck plans to travel to Afghanistan to assess the situation. The SPD party chief is fully aware of the tinderbox nature of Afghanistan for the Social Democrats' foreign policy. In the sixth year of the Western intervention, the situation in Aghanistan is growing increasingly precarious and Iraq-like -- and the party base need look no further than the media to recognize that. Both the party core and the general public are keenly aware that a massive Western military deployment has failed to bring order to the country. 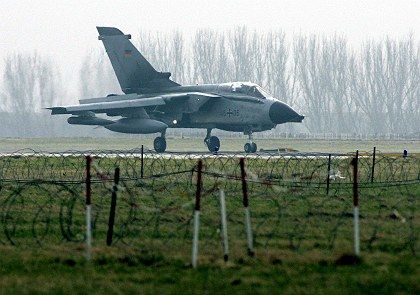 A Tornado reconnaissance jet: An inner-party conflict for the Social Democrats.

Around the same time, NATO also ratcheted up its combat operations in Afghanistan with Operation Achilles. About 4,500 NATO soldiers have been deployed to protect the vital Kajaki dam in southern Afghanistan from an estimated 6,000 Taliban fighters. The deposed Islamists had previously announced they had prepared more than 2,000 men for suicide attacks. The Americans reacted by promptly redeploying 3,200 men from the 173rd Airborne Brigade to the area.

For its part, Germany is sending Tornado reconnaissance jets that will indirectly aid NATO troops in the south, but none of the soon to be 3,500 Bundeswehr soldiers stationed in the country will participate in the combat operations. That fact, however, has done little to assuage fears that the Germans could be pulled deeper and deeper into the war.

"There will be additional demands from NATO," SPD parliamentary floor leader Struck warned.

But those demands will also likely be met with reservations in Germany. In the years that have passed since the toppling of the Taliban, work has been accomplished in parts of the country -- streets and schools have been built. But the majority of Afghans continue to live in abject poverty. Even the capital Kabul is plagued with a shortage of electricity -- Western embassies and hotels get their power from their own generators.

Opium for the masses

The only boom sector in the country is the drug business. Even under the watchful eye of the international community, the destitute country has risen to become the world's largest producer of opium. The country's drug barons -- who are believed to include Hamid Karzai's own brother, Ahmed Wali Karzai, though the Afghan president disputes the allegation -- control 92 percent of the world market and have a turnover of as much as €3 billion from the lucrative trade.

Of course, the lack of success in the Afghanistan project is also at least partially attributable to errors made by the Germans. The government under ex-chancellor Schröder long blocked efforts to station ISAF troops in Kabul, and ISAF was only able to take over command for the entire country last year. Nor has the German government been quite the role model it has presented itself to be when it comes to Afghanistan. German soldiers, diplomats and development aid workers long railed about the fact that the Italians "of all people" (well-known for high-profile government corruption) had been put in charge of developing Afghanistan's justice system. But last year, it emerged that Afghanistan's German-run police training program had produced equally dissatisfactory results.

Throughout, the German government has skillfully created the impression that it has put more emphasis on civil reconstruction than the hawkish Anglo-Saxons. But now it's the much-maligned Americans who are planning to invest $2 billion in reconstruction during the next two years.

For now, the SPD party leadership has undertaken a major internal debate about Afghanistan and other areas of foreign policy conflict within the party. The hope is to paper over differences before this fall's vote on the next Afghanistan mandate.

A threat for Christian Democrats?

Meanwhile, the Christian Democrats are observing their coalition partner's conflict with increasing concern and irritation. Up until now, foreign and security policy were two of the few issues the government parties could agree upon. Now many Christian Democrats see the thin SPD consensus on the Tornado deployment as evidence of a shift in the party.

But the developement also presents a host of problems for Chancellor Merkel and her followers, who haven't forgotten that the SPD emerged as a peace party during the 2002 elections, nor the fact that, with their opposition to the Iraq war, they snatched voters away from the Christian Democrats. Leading Christian Democrats believe that Afghanistan and the conflict over the missile defense system could create a similar situation.