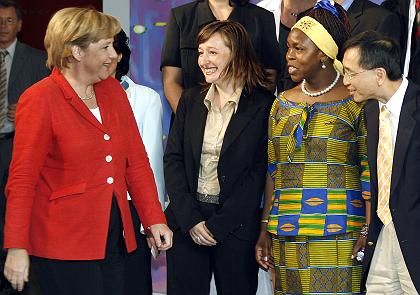 Angela Merkel at the 2006 Integration Summit: The chancellor is calling for "concrete policies."

For almost a half century, few images were more illustrative of the role of foreigners living in Germany than a 1964 photo of tall, robust men in suits shaking the hands of a slender, dark-haired man. Standing between them is a moped -- a welcome gift for the country's one-millionth "guest worker."

Germany's top brass, the image suggests, only cared about the people on the lower rungs of the social ladder on special occasions.

Those occasions have at least grown more numerous. Ever since Chancellor Angela Merkel decided the situation of immigrants in Germany would be a political priority, one conference has followed another. The first national "Integration Summit" in July 2006 was followed by an "Islam Conference" at which representatives of Muslim organizations met with German Interior Minister Wolfgang Schäuble and other officials. And on Thursday, the chancellor wants to personally present immigrants in Germany with a cornucopia of good deeds at her second integration summit.

It took decades before the German government began to take the issue of integrating its masses of immigrants seriously. During the "Wirtschaftswunder" of the 1950s, Germany began seeking "guest workers" from Italy and later from Greece, Spain, Portugal, Tunisia, Yugoslavia and Turkey to help rebuild the country and profit from the economic boom. Unlike the United States, though, where immigrants were asked to come and participate in the American Dream, and possibly make a fortune, Germany said: Come, work here for a while and then get lost.

About 50 percent did, but the other half stayed. Today, almost one out of five residents in Germany (15 million out of a population of 82 million) is either an immigrant or the child of immigrants.

Not that you would necessarily realize this from the political discourse. Many politicians call Germany a "country of integration," rather than a "country of immigration" -- the latter term might send the wrong message to those waiting at the door, after all.

It's a debate in which politicians have often come across insensitively -- most famously during a 2000 regional election campaign in the state of North-Rhine Westphalia, where one conservative candidate ran on the platform "Kinder statt Inder," or "Children instead of Indians." The subtext: that Germans should have more children rather than open the country, with its fast graying and shrinking population, up to immigration and a Green Card program. The widely cited quote may not have been directed at the millions of immigrants already living here, but it certainly did little to make them feel at home.

Even today, the government's coordinator for integration, Maria Böhmer of the conservative Christian Democratic Union (CDU), claims that the "dream of multiculturalism has failed."

Now immigrant flashpoints in France, the Netherlands, the United Kingdom and other parts of Europe, as well as fears of radicalism and home-grown terror, have made the issue of integrating the country's minority populations more pressing for the German government.

The first general German strategy for improved relations between Germans and immigrants is called the "National Integration Plan" and is expected to be approved at Thursday's summit. After the first meeting convened by Merkel last year, more than 250 experts from the German government began drafting the plan in six working groups.

The 200-page paper calls for the federal government in Berlin, the governments of the country's 16 states and umbrella organizations in immigrant communities to pledge to work together to better integrate immigrants in the future by means of providing improved language courses, earlier support to parents and assistance for those preparing to enter the labor market.

There are several major hitches though. The question of how many of the projects will be financed remains unanswered. Additionally, no panel exists today to verify the plan's progress after its implementation. And on the eve of the summit, boycotts have been announced by some of the country's largest Turkish immigrant groups.

'We Need More than a Photo-Op'

Representatives of Germany's state and local governments believe that greater accountability is necessary if Merkel wants her summit to produce anything greater than just a symbolic gesture. The integration minister of North Rhine-Westphalia, Armin Laschet of the CDU, said his state wants to present a proposal for the creation of a "Council of Experts," which would meet at least once every six months to verify implementation of the integration plan. He said his government expected "concrete results" and not just a "final photo-op at the summit."

The president of the German Association of Cities (Deutsche Städtetag), Munich mayor Christian Ude of the center-left Social Democratic Party, wants to verify the success of the agreements during an "additional integration summit." Ude said it must be ensured that the plan -- with its "imprecise but entirely well-intentioned goals" -- is in fact implemented.

Merkel's commissioner for integration, Maria Böhmer of the CDU, is also said to be aware of the problem. An interim assessment is planned for late 2008, sources close to the expert said, but they added it is still unclear how that will work.

Immigrant groups are likely to keep a particularly close eye on what the promises made in the Integration Plan are actually worth. Several Turkish immigrant associations have said they will boycott the integration summit in protest over the tightening of Germany's immigration laws approved by the Bundestag, the national parliament, on Friday. The organizations accuse Merkel and her associates of holding up the banner of integration while marching in the opposite direction when it comes time to make concrete decisions.

On Wednesday, Kenan Kolat, chairman of the Turkish Community in Germany (TGD) organization, said his group would not attend the summit. "We have determined that it makes no sense to participate because the government has not understood the seriousness of our concerns and doesn't appear to be willing to seriously discuss possible changes to the immigration law," Kolat told SPIEGEL ONLINE.

The Turkish group's main criticism, according to Kolat, is that new restrictions on later immigration of family members would apply differently to German citizens of German ethnicity and German citizens of non-German origin. "That is discrimination," he said. Forced marriages, he added, are human rights violations and must be punished legally. The new measures wouldn't do anything to stop the problem, he said.

His organization is also opposing a provision in the new law requiring immigrants to prove their knowledge of the German language before entering the country. "Of course we respect the decisions of the German parliament, but that doesn't mean they are going to help the process of integration," he told German public broadcaster ZDF.

Despite the intention of TGD and three other major Turkish organizations to boycott the summit, integration coordinator Böhmer said the event would go ahead as planned. "The event will happen no matter what," Böhmer told SPIEGEL ONLINE, "and no chairs will go empty. You don't solve problems by staying away, but rather by speaking to each other."

She accused the groups of undermining their own interests, but added: "The integration of Germany's 2.5 million immigrants of Turkish origin will not suffer because of their decision."

The organizers of the integration summit are, of course, the wrong audience for such suspicions. The will to do more for the integration of immigrants is documented in all four chapters of the National Integration Plan. Still, there is no arguing that many of the pledges made by the federal government, state governments, the communal umbrella organizations and social groups are still rather vague.

Out of the roughly 150 measures announced by the German government, few are as tangible as the commitment to improve integration courses. The mandatory courses for immigrants wishing to become German citizens are to require more classroom hours than in the past, take place in smaller groups and be extended by options which cater especially to children, mothers and the illiterate. A special program for the promotion of job market entrants, designed for secondary school students, is to be ramped up to allow a total of 40,000 people to attend across the country.

'We Only Get the Second Best'

State governments have announced plans to submit immigrant children to language tests "as early as possible." Schools with a high percentage of foreigners would then receive additional support, by being allotted more teachers of immigrant origin, for example. Moreover, the federal government, state governments and communal umbrella organizations have also said they would commit to promote the hiring of more immigrants in civil service jobs.

German historian and integration expert Klaus Bade says he doubts all measures agreed on in the Integration Plan are "sensible and feasible," but at the same time he believes Merkel's summit will at least prevent the issue of integration from being left on the back burner any longer in Germany.

Bade also sees entirely pragmatic motives at work in Merkel's interest in what was for years a taboo issue: It is simply far cheaper to integrate immigrants when they are still children, he says, than to care for them if they wind up jobless and on the welfare rolls.

Besides, highly qualified immigrants now tend to avoid Germany. "We only get the second best," Bade says. "The best go to Silicon Valley or to England. "

With reporting by Andrea Brandt and Cordula Meyer.