It's been a disappointing few weeks for German Foreign Minister Guido Westerwelle, the leader of the pro-business Free Democrats. Chancellor Angela Merkel, with whom he shares power in a center-right coalition, told him off publicly for ranting about supposedly excessive welfare benefits last week. Furthermore, leading members of her conservative Christian Democrats (CDU) are pouring cold water on his pet policies, especially tax cuts. The CDU is also openly flirting with the opposition Greens party as an alternative to the FDP in future governments. And to cap it all, a veteran CDU member, Heiner Geissler, called him a "donkey" for his rhetoric about unemployment benefits.

This was hardly the scenario Westerwelle had in mind when his party moved into government last autumn following 11 years in opposition. Indeed, both he and Merkel followed a campaign script saying that the CDU and the FDP were natural political partners, and that they wanted a repeat of the center-right pairing that has governed Germany so often in the past. But now, hardly a day goes by without heated policy disputes between the two parties -- and the coalition agreement designed to set the course has done little to bind Merkel's conservatives and Westerwelle's FDP together.

The most recent row was over the future of nuclear power in Germany, but irrespective of the issue, the tone is getting sharper. It is becoming difficult to attribute the bickering to the normal teething troubles of a new government trying to find its rythym. The first 100 days have already passed and the partners have had time to get attuned to each other. They've failed.

Indeed, it is becoming increasingly evident that this center-right partnership, which has ruled Germany for an aggregate total of 28 years since the establishment of the Federal Republic in 1949 and which Merkel always insisted was her preferred alliance, simply isn't as well-matched as it used to be.

Large parts of the CDU and its Bavarian sister party, the Christian Social Union (CSU), have become "greener" in recent years. Under Merkel's leadership, the conservatives have embraced environmental protection and steered away from the pro-business stance of its past. Merkel's call for radical, painful reform prior to the 2005 elections is but a distant memory. After the iron lady approach almost lost her that vote, she quickly steered to the political center.

The FDP, by contrast, seems as though it has spent the last three years in hibernation. It remains what it always was -- the party of business interests. And the coalition between the two political camps is fragile as a result -- so much so that Merkel and her conservatives have become increasingly convinced that the future may lie in a partnership with the Greens.

A possible testing ground for such a constellation could be North Rhine-Westphalia, Germany's most populous state, which holds state elections in May. Opinion polls suggest that the current regional government of CDU and FDP might lose its majority, and that a CDU-Green alliance, which would have a combined majority according to current opinion polls, might be an alternative -- and a test run for a future coalition at the national level.

That explains why North Rhine-Westphalia governor Jürgen Rüttgers has been criticizing plans for further tax cuts in 2011, a key FDP demand. And why Environment Minister Norbert Röttgen, a CDU ally of Merkel's, last week called for a rethink of the government's plans to prolong the lifetimes of Germany's 17 nuclear power stations.

Röttgen's remarks outraged the FDP, which remains committed to nuclear power. But he has Merkel's backing, partly because shutting down the reactors is a core Green issue.

At a meeting with Merkel in the chancellery last Tuesday, Westerwelle raised his voice in exasperation at Röttgen. "That's not what we agreed!" he said. Merkel frostily cut him short, telling him that Röttgen wasn't in the meeting, and that it therefore made little sense to discuss the issue. CDU politicians in the room were amused at her snippy tone, a welcome departure from her often-criticized presidential style.

Merkel has surrounded herself with a group of younger conservatives who believe that a coalition with the Greens makes more sense these days than the traditional center-right format. Röttgen, CDU general secretary Hermann Gröhe and Ronald Pofalla, her chief of staff, all joined national politics in the 1990s and grew tired of the political torpor and stagnation of that era under Chancellor Helmut Kohl, who ran a center-right coalition from 1982 until 1998.

The CDU-FDP format seems outmoded. In 2005, when the two parties joined forces in an attempt to oust Social Democrat Gerhard Schröder in the general election, they both still shared the same vision. Merkel promised welfare reforms that went far beyond Schroeder's "Agenda 2010" cutbacks, which sealed his political fate. She was convinced that her radical ideas would be popular, but she was wrong. Her conservatives slumped to 35.2 percent and were forced to form a coalition with the center-left Social Democrats (SPD).

The lessons learned from that experience have led Merkel to steer the CDU to the left in an attempt to attract new groups of voters: urban women and workers who feel threatened by the icy winds of globalization.

The FDP, by contrast, has stuck firmly to its neoliberal guns. Even the financial crisis and looming climate change haven't shaken its faith. Westerwelle keeps on repeating his tax-cutting mantra despite surging government debt, and he says anyone who questions him is the victim of "brainwashing" by the wealth redistribution lobby. The Chancellery is increasingly worried that the FDP is mutating into a sort of political sect. "It's time the FDP started acknowledging reality," said one of Merkel's advisers.

One component of that reality is that common ground between the CDU and the Greens has increased in recent years. Shortly after the new government was formed last November, the new interior minister, Thomas de Maiziere, introduced himself to the domestic affairs committee in German parliament. He said he was not interested in introducing a slew of new domestic security laws, as his predecessor, Wolfgang Schäuble, had become famous for. The Green committee members erupted in applause.

The CDU's recent flirtation is a sensitive issue for the Greens at the national level. Most Green voters prefer the SPD to the conservatives, and any clear expression of support for CDU-Green alliances could cost the Greens support in the next general election.

Instead of embracing the CDU's advances, the Green Party leadership has instead adopted a strategy of not ruling anything out. They avoid talking about it but consider a government with the conservatives a possibly if such a majority were to materialize. This strategy got its first thumbs-up at a regional party conference in North Rhine-Westphalia earlier this month. Greens delegates decided to rule out forming a coalition with the CDU and FDP until after the May 9 election. But they didn't rule out a coalition with the CDU alone. "The Greens have a pronounced instinct for power," said a satisfied Renate Künast, Green Party floor leader in Berlin.

The FDP fears that Merkel secretly wants a CDU-Green alliance in North Rhine-Westphalia because that would give the Greens sufficient clout in the Bundesrat, Germany's upper legislative chamber, to block all the FDP's favorite policies -- the tax cuts, welfare reform and health reforms.

The only other CDU-Green alliance in Germany is in the city-state of Hamburg. The CDU mayor, Ole von Beust, waxes lyrical about the working atmosphere of his coalition -- in marked contrast to Merkel's own fractious government. 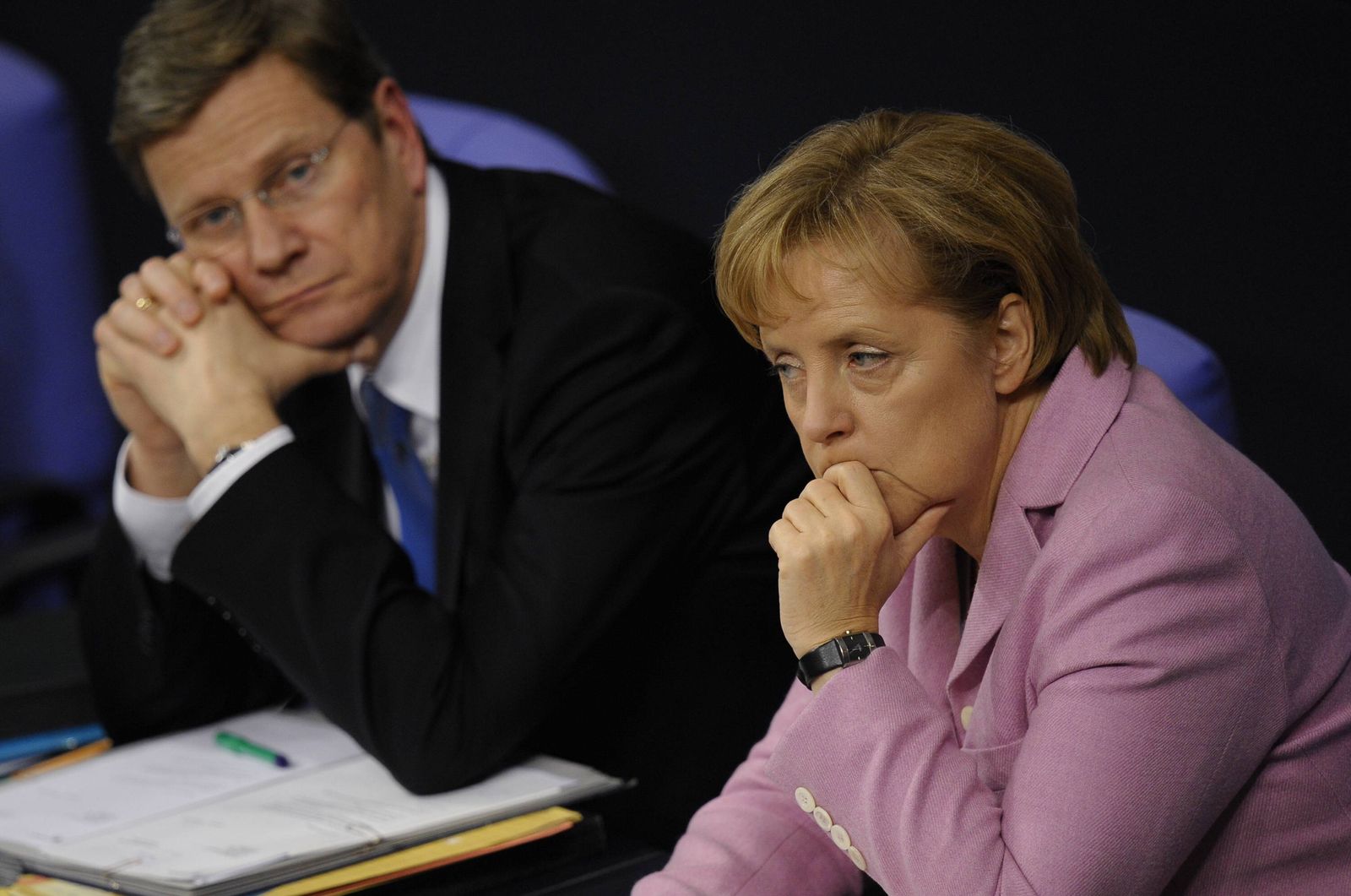 Not such a happy partnership: FDP leader Guido Westerwelle and Chancellor Angela Merkel.