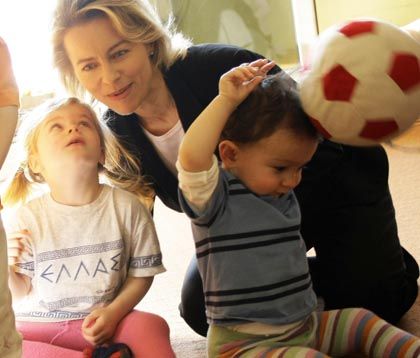 Pandas are famously bad at sex. In fact, they are so unwilling to breed that zoo keepers have to resort to all kinds of tricks to get them to procreate, including showing them pornographic movies to get them in the mood.

Ursula von der Leyen must feel a certain sympathy with the panda keepers. One of her main tasks as Germany's family minister is to coax reluctant Germans into having children, so that the shrinking of the country's population can be slowed or even reversed.

At the moment she has plenty of reasons to celebrate: Preliminary birth statistics for 2007 appear to show that her policies are having the desired effect.

"In 2007, for the first time in years, we did not have a decline in the birthrate," she told SPIEGEL in an interview published Monday. The fertility rate in Germany for that year, she explained, was an average of 1.45 children per woman -- up from 1.33 in 2006 and the highest since German reunification in 1990. "That shows that we are on the right track."

There's a lot at stake. Germany's Federal Statistical Office predicts that the country's current population of 82 million will decline to between 69 million and 74 million by 2050 -- less than the population in 1963, when Germany had 75 million people.

As well as having detrimental effects on the country's economy, that kind of demographic implosion would spell disaster for Germany's creaking social security system, which relies on contributions from the current working population to finance the pensions of retirees. A combination of low birthrates and longer life expectancies means fewer people of working age supporting more retirees -- and the pension math no longer works. With mass immigration a politically difficult option, and radical pension reform unpopular, encouraging more births is the easiest alternative.

So what did von der Leyen do which apparently gave Germans a sudden urge to procreate? The answer is simple: She paid them.

One of the cornerstones of her family policy is benefit payments for parents, known as Elterngeld (literally "parents money"). Under the new benefit, introduced in January 2007, the state pays the parent who stays home with the child 67 percent of that parent's current net income, up to a maximum of €1,800 ($2,810) a month, for up to 12 months. If both parents elect to take time off, the total number of months the benefit is paid, split between both parents, goes up to 14 -- a measure intended to encourage fathers to take time off work.

"Under the new program, women can feel secure that they can take a short time off work without seeing a dramatic drop in their income, and then go back to work," Steffen Kröhnert, a demographer at the Berlin Institute for Population and Development, told SPIEGEL ONLINE.

While Kröhnert feels it is still too soon to conclusively say if the new benefits program is directly responsible for the jump in the birthrate, he points to anecdotal evidence that it is. "Several women in their 30s told me they were thinking about having children because of the Elterngeld program, and that they wouldn't have considered having children without it," he says. "Von der Leyen's policies are definitely a step in the right direction."

The Elterngeld program is deliberately aimed at the middle classes, who stand to benefit the most from the income-dependent payments. "In Germany over the last three decades, there has been a collision between couples who want to combine family and work and a society which doesn't make it possible," Kröhnert explains. It's a problem especially for the middle class, he says: "Well-qualified female professionals don't want to take several years out to look after children. Not only is there the loss of income during the break, but they are disadvantaged when they want to continue their careers later."

Part of the problem is a lack of suitable child care -- particulary for young children -- which means that women are forced to take several years out if they have children. This is something that von der Leyen is also trying to address. After months of fighting, she finally succeeded in August 2007 in getting the federal government and Germany's states to agreed to triple the number of daycare places in the country to 750,000 by 2013. As of 2013, parents will also have a legal right to a daycare slot for children under three. Currently parents only have the right to a child care place if their children are three or over, making it difficult for mothers with young children to return to work.

But while von der Leyen may be basking in the glow of the new birth figures, she still faces a number of challenges. Although she is a member of the center-right Christian Democratic Union (CDU) party, not all her policies are popular with the party's conservative rank-and-file. She has come under attack from conservative politicians for allegedly damaging the traditional family through her proposals to expand the child care provision -- they would prefer German mothers to stay at home with the kids.

Von der Leyen's latest initiative is also likely to get her party's conservative members worked up. She told SPIEGEL she would like to build on the success of the Elterngeld scheme by increasing the number of paid months that fathers can take off, given the unexpected success of the so-called "father months" in 2007. "It's time to give even more support to fathers," she said. However the "father months" part of the program has been particularly criticized by conservative CDU politicians, who dismiss it as a "diaper internship." Any serious bid to expand that part of the scheme is likely to see von der Leyen coming under fire again from her party's conservative wing.

In addition, even the newly boosted birthrate is still a long way below the 2.1 child per family replacement rate needed in industrialized countries to maintain the population. It remains to be seen how much can be achieved with more generous child care provision and other means. The vice president of the Federal Statistical Office, Walter Radermacher, has warned ominously that "the shrinking of (Germany's) population can no longer be halted."

Then there is the problem of the former East Germany, which is seeing its population shrink dramatically as young people -- particularly educated young women -- leave economically blighted areas in search of work and a better life. According to the Federal Statistical Office, the population in Germany's eastern states will shrink by 31 percent between 2006 and 2050, compared to a decrease of 14 percent in the former West Germany. It will take a lot more than measures aimed at the prosperous middle class to fix that problem.

Nevertheless, for now von der Leyen can take pleasure in her recent successes. And if anyone can persuade Germans to have children, it's her. After all, she is leading by example: She has seven children of her own.