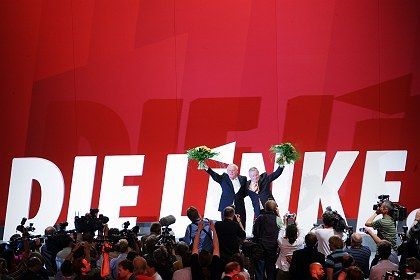 It's often just a single day that defines a political legacy. For former German Chancellor Helmut Kohl, it was the Oct. 3, 1990 reunification of Germany. Ex-US President Richard Nixon's place in history was on full display on the day he resigned in the wake of Watergate. And Ronald Reagan's legacy rests heavily on his June 12, 1987 speech in Berlin in which he demanded that Mikhail Gorbachev "tear down this wall."

The defining day for former German leader Gerhard Schröder may very well have been Saturday, June 16, 2007. Finally this weekend, after years of planning and seemingly endless negotiations, the left side of Germany's political spectrum just got a whole lot more crowded. The new party, fittingly, is called the Left Party. And it provides a home for former communists from Eastern Germany, idealistic socialists from Western Germany -- and a whole slew of former Social Democratic Party (SPD) members disgusted by their party's lurch to the center.

"I attack the policies of the SPD," new Left Party co-chair Oskar Lafontaine -- and former party chairman for the SPD -- told SPIEGEL ONLINE in an interview last week. "The policies of the SPD are as follows: salary cuts, pension cuts, dismantling the welfare state and participation in wars that violate human rights laws. That is contrary to my political convictions."

Political polls indicate that Lafontaine is not alone. Saturday's official wedding will likely give the party -- a fusion between former East German communists from the Party of Democratic Socialism (PDS) and Western German socialists from WASG -- a boost from the single digits it has been polling since the 2005 election. The two parties ran a joint campaign in that vote, but the promised union was continually delayed as political differences were ironed out.

A Threat to Social Democrats?

Now that the two have become one, it appears that more Germans might be paying attention. A new survey by Forsa indicates that 9 percent of SPD members are considering a switch to the Left Party and a full 23 percent of SPD voters could imagine voting for the Left Party in Germany's next parliamentary elections, currently scheduled for 2009.

In short, Germany's Social Democrats are in trouble. And judging by weekend comments by SPD leaders, the party is also frightened. The "so-called Left Party," floor leader Peter Struck vented in an interview published in the newspaper Bild on Monday, "is a club of social romantics who promise people the world without having any idea how to pay for it. It's hot air with absolutely no substance."

SPD General Secretary Hubertus Heil threw his hat into the ring as well, accusing the Left Party of denying reality and called them "anti-enlightened left-wing populists." And Germany's Environment Minister Sigmar Gabriel, likewise of the SPD, told SPIEGEL that "Lafontaine is a chameleon -- someone who has changed his political positions often in his life We shouldnt be afraid of him. But we should stop demonizing him. He is smaller than we sometimes make him out to be."

One of the reasons for the vehemence with which the SPD goes after Lafontaine, of course, is that he used to be one of the party's darlings. In 1990, he was the SPD's candidate for chancellor, losing out to Helmut Kohl in the wake of reunification. In 1995, he became SPD chairman and three years later was appointed finance minister in Schröder's first government. But in 1999, Lafontaine abruptly resigned from all political and party offices and since then has devoted his career to being a populist thorn in the SPD's side -- and a vocal critic of former friend Schröder. 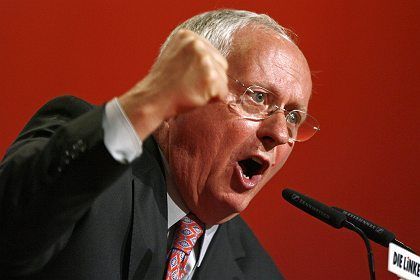 Oskar Lafontaine is a controversial figure in the German political landscape.

But it was Schröder himself who saved Germany's radical left wing from historical oblivion. Long the political home of disgruntled ex-communists from former East Germany, the far left enjoyed a resurgence as Schröder began steering the SPD toward the political center. Cuts in unemployment benefits, lower pensions and a general slimming down of the welfare state drove many SPD members to exit stage left.

The new Left Party now sees itself as representing Germany's workers and union members -- the very group that once formed the leftist core of SPD voters.

Lafontaine and Co. are demanding a repeal of the new retirement age of 67, a reversal of Schröder's reform package known as Hartz IV (which substantially reduced benefit payments to the long-term unemployed) and a cut in working hours. Furthermore, the party has established itself as a champion of deeply rooted German pacifism. The Left Party would like to see Germany pull out of Afghanistan immediately and has even accused German soldiers of taking part in "terrorist acts" in the country.

Reactions to the creation of the Left Party have been just as fierce outside of the SPD. Guido Westerwelle, chief of the liberal Free Democratic Party, called the Left Party the reincarnation of the "musty corpse" of socialism over the weekend. And conservative heavy hitter Edmund Stoiber of Bavaria said that Lafontaine is a "dangerous demagogue," and warned that he is trying to split the SPD.

Most of all, though, Germany's political elite are concerned that the Left Party may not be completely committed to democracy. Fully 40,000 of the Left Party's 72,000 members were previously members of East Germany's Communist Party, the SED. The party leadership has likewise praised Venezuelan President Hugo Chavez for his efforts to renationalize finance and energy companies, despite his recent crackdowns on freedom of the press. There have been calls for German authorities to keep the party under observation, much like its predecessor, the PDS, was watched.

It's hard to tell what the Left Party might mean for the long-term health of the left side of Germany's political spectrum. Opinion polls show that -- as in the 2005 elections -- more Germans support parties to the left of the political center than those to the right. But the SPD is wary of working with the Left Party, and will likely have trouble winning elections on its own. Opinion polls indicate that the Left Party could eventually attract up to 24 percent of Germany's electorate -- and as many as 44 percent of voters living in the states of the former East Germany.

It could also just be a flash in the pan. If it isn't, though, June 16 could wind up becoming Schröder's lasting political legacy.