For a celebrated German politician lauded during the last 12 months for his refreshingly open brand of politics, it seemed a particularly disingenuous defense.

"Those who believe that they can pin Sept. 4 on me," German Defense Minister Karl-Theodor zu Guttenberg told the tabloid Bild on Sunday, "should keep in mind that I wasn't even defense minister yet at the time."

Guttenberg was referring to the fateful German-ordered bombardment in Kunduz, Afghanistan which resulted in the deaths of numerous civilians -- estimates range from 17 to 142. More pertinent for Guttenberg this week, however, is that the bombing has also resulted in numerous questions centering on how much Berlin knew about the air strike, and when it knew it. And not all of those questions stem from events preceding his time in office -- a fact that has put both the defense minister and Chancellor Angela Merkel in a tight spot this week.

Increasingly, the debate seems to be focusing on the question as to whether Guttenberg is telling the truth. And if he's not, what exactly is he trying to cover up?

When Did Guttenberg Know?

Over the weekend, doubt was cast on Guttenberg's account as to why he accepted the resignation of Germany's top soldier, Bundeswehr Inspector General Wolfgang Schneiderhan, and fired a top Defense Ministry official, Peter Wichert, at the end of November. Guttenberg continues to insist that the two had withheld important reports on the Sept. 4 incident, leading to a Guttenberg statement in early November in which he said the bombing had been "militarily appropriate."

But SPIEGEL reported over the weekend that Schneiderhan disputes that version of events, saying that he had immediately given Guttenberg all the information the minister had requested. Schneiderhan confirmed that report in a weekend interview with the German public television station ARD.

Just when Guttenberg received all the information he needed to arrive at an informed assessment of the bombing is critical. His initial assessment came just one week after he was sworn in as Merkel's new defense minister (prior to German general elections at the end of September he had been the economics minister). But it wasn't long before the German media began questioning the official version of events. On Dec. 3, Guttenberg reversed his position and called the attack "militarily inappropriate," citing documents he had seen following his first statement.

Much of the speculation surrounding Guttenberg, however, centers on one report that he did see immediately upon taking office: the NATO report on the incident. And as details from that report leak out, Guttenberg's position is becoming ever more tenuous.

According to the version of events repeated in Berlin since the attack, German Colonel Georg Klein ordered the bombardment of two tanker trucks that had been hijacked by Taliban insurgents. Allegedly out of fear that the tankers could be turned into "rolling bombs" used to attack a German base a few kilometers away, Klein called in US air support -- an order he was only authorized to give if there had been enemy contact ("troops in contact" in NATO jargon) or if German troops were in danger. At the time of the bombing, the two tankers were stuck in a sandbank in the middle of the Kunduz River.

Since the attack, German officials including Guttenberg have repeatedly indicated that the tankers themselves were the target of the attack. But the NATO report, which has been seen by SPIEGEL, makes it clear that Klein was primarily interested in killing the dozens of Taliban fighters who had gathered around the tankers in an effort to free the vehicles from the sandbank.

According to the NATO report, the US pilots who ultimately carried out the air strike asked their wing commander whether they were to target the vehicles or the people. They were told, on Klein's authority, to target the people. When the pilots asked if German troops had had contact with the enemy, they received the response, "confirmed." Yet no German troops had approached the scene from their nearby base.

Should that version of events be true, then Klein's order to attack countermanded both NATO's mandate in Afghanistan and the German military's mandate as provided by German parliament. Targeted killings, whether carried out against Taliban insurgents or civilians, are not allowed. Nevertheless, Guttenberg, who was privy to the NATO report immediately upon taking over the Defense Ministry, immediately threw his support behind Klein -- a position he has not backed away from to this day.

Even more problematic, according to the NATO report, Klein likely knew at the time he gave the order that at least one civilian was present at the site. A translator working with an Afghan spotter used by the German military told NATO investigators that he told Klein's people that one of the two tanker drivers was still alive. The NATO report makes clear that the US pilots asked about the presence of the drivers, one of whom had been killed by the Taliban. They were told by their wing commander that he had no information as to their whereabouts.

Guttenberg has so far refused to comment extensively on the newly leaked details, referring instead to the parliamentary inquiry into the incident which will begin later this week.

Some in Berlin are now wondering whether the attack may be the result of a secret alteration of the German mission in Afghanistan. The NATO report also indicates that the Sept. 4 bombing was ordered under the auspices of "Task Force 47," a unit which includes both Bundeswehr reconnaissance troops and members of the German special forces unit KSK. Andrea Nahles, general secretary of the opposition Social Democrats (SPD), has demanded that both Guttenberg and Merkel reply to concerns that the German mission has been changed to include a mandate to "liquidate Taliban leaders."

So far, Merkel has remained largely silent when it comes to the Kunduz bombing. But it seems unlikely that she will be able to maintain her silence for much longer. "It is time for the government to make a clear statement this week to shed light" on the incident, demanded SPD leader Sigmar Gabriel on Monday.

Gabriel also demanded that Guttenberg resign. "If Mr. Jung had to resign because he didn't adequately inform the public," Gabriel said in reference to former Defense Minister Franz Josef Jung, who resigned from Merkel's cabinet in November after it became clear that he misinformed Germans about the possibility that the Kunduz attack had cost civilian lives, "and Mr. Guttenberg knew everything that we are now reading daily in the newspapers and didn't say anything, then he should be held to the same standard."

Government spokesman Ulrich Wilhelm on Monday vehemently denied that the chancellery has approved measures to target Taliban leaders. But it seems likely that Merkel's government will have to provide a more comprehensive statement soon. After all, Guttenberg wasn't the only one who has had access to the NATO report for the past six weeks. It was sent to the Chancellery as well. 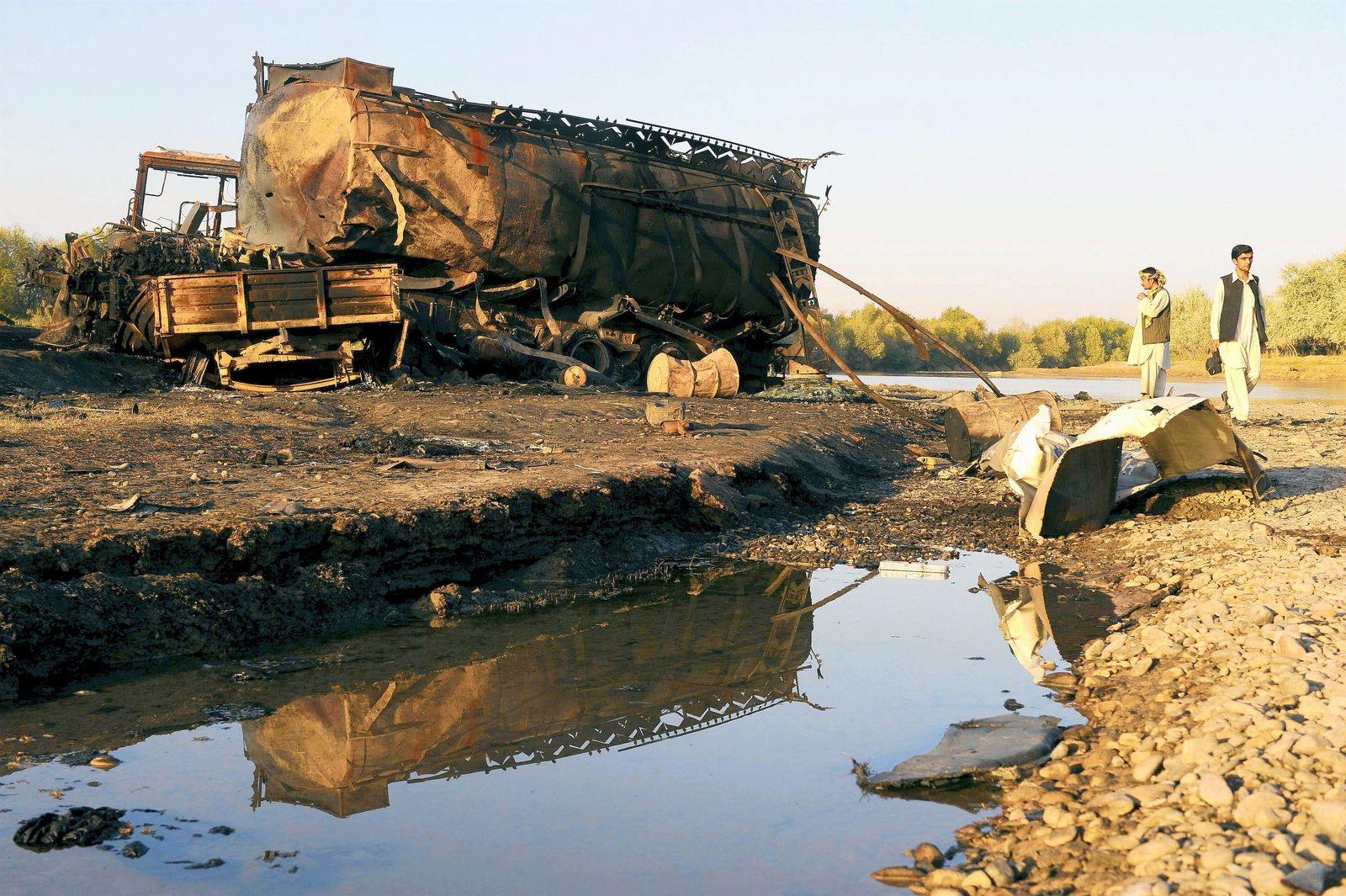 One of the tankers struck in a German-ordered attack in Kunduz in early September. As many as 142 civilians may have been killed in the air strike.