In her career as chancellor of Germany, it is arguable that no month has taken as great a political toll on Angela Merkel as the past one.

On Feb. 20, the center-left Social Democratic Party (SPD) walloped her conservative Christian Democratic Union (CDU) in elections in the city-state of Hamburg. On March 1, her extremely popular defense minister, Karl-Theodor zu Guttenberg, resigned amid indications that he had plagiarized extensive passages of his doctoral thesis. And last week, the chancellor reversed course on nuclear energy and announced the immediate -- if temporary -- shutdown of seven reactors in Germany. The move came just six months after her government pushed through highly controversial legislation to extend their lifespans.

This week, the chancellor has faced withering criticism, some coming from her own party, of her government's decision to abstain from a United Nations Security Council resolution authorizing the use of military force in Libya. Germany, many said, was leaving its allies in the lurch.

Merkel's string of bad luck shows no signs of coming to an end. On Sunday, voters go to the polls in the economic-powerhouse state of Baden-Württemberg, in southwestern Germany. Polls in February had already indicated that the state's CDU governor, Stefan Mappus, was by no means assured of hanging on to his position. Now, in the face of rising concerns about nuclear power in Germany resulting from the ongoing catastrophe in Japan, ballot-box success for Mappus, a long-time supporter of atomic energy, is looking increasingly unlikely.

Should his party lose power, it would mark the first time in almost 60 years that the CDU did not occupy the governor's office in the state.

The vote comes on the heels of a state election in Saxony-Anhalt last weekend, which saw support for the CDU slide. Also taking place on Sunday is a vote in the western state of Rhineland-Palatinate, where the SPD seems assured of holding onto power. But the loss of Baden-Württemberg would be a major setback for Merkel and yet another indication that German voters are tiring of her party's leadership. And the disaster in Japan has made such an outcome that much more likely.

"The CDU decision to back-pedal on nuclear energy has very clearly been damaging," Manfred Güllner, head of the public survey group Forsa, told the newsmagazine Stern on Wednesday. A poll released by the same institute on Wednesday found that Germany-wide support for the CDU has plummeted by three percentage points, to just 33 percent, in the last week.

Mappus' problems, however, go beyond his party's sinking numbers nationwide. The Baden-Württemberg governor, after all, has long been a firm, even boisterous, supporter of nuclear energy. Last year, as Merkel's government was preparing legislation to extend the lifespans of Germany's 17 nuclear reactors, Mappus even went so far as to hint that Environment Minister Norbert Röttgen -- a CDU party ally -- should resign due to his reluctance to support the extension.

"I am no longer prepared to accept the escapades of the environment minister," Mappus said. "Politics is a team sport. Those who prefer individual sports should perhaps look for other fields of activity."

A key component to Merkel's nuclear legislation last fall -- effectively a reversal of the nuclear phase-out legislated by SPD Chancellor Gerhard Schröder's government in 2002 -- was her government's insistence that Germany's nuclear reactors were safe. This week's hurried closure of seven older reactors -- including, with Mappus' acquiescence, the permanent shutdown of Neckarwestheim I in his home state -- appears to undermine that claim.

Plunging into the Chasm

It is a credibility chasm that Mappus has plunged into as well. The Germans, after all, are deeply skeptical of nuclear power. A Forsa survey from last week found that fully 80 percent of Germans are "very afraid," "quite afraid" or "somewhat afraid" of atomic energy.

Mappus has done what he can to elegantly retreat from his suddenly radioactive embrace of nuclear power. "Atomic plants that do not meet the requisite safety requirements will be turned off," he said last week. "Not seven years from now, not in 15 years, not in 20 years. But immediately."

But his opponents from the SPD and the Greens have smelled blood. "Who is supposed to believe your newfound concern?" Nils Schmid, the SPD's lead candidate in Baden-Württemberg, demanded of Mappus at a state parliament session last Thursday. During a recent televised debate, Schmid accused Mappus of long ignoring the dangers of atomic energy. "The real watershed moment," he said, "was 25 years ago when Chernobyl exploded."

Green Party candidate Winfried Kretschmann likewise went on the attack. "You are absolutely the least credible of all" when it comes to changing course on atomic policy, Kretschmann told Mappus.

Current polls show that even though the CDU can still count on 38 percent support on Sunday, it may not be enough to keep Mappus in power. His current coalition partners, the business-friendly Free Democratic Party (FDP), stand at 6 percent in the polls. The Social Democrats and the Green Party, for their part, add up to 47 percent support -- three points ahead of the CDU-FDP alliance -- with recent Green gains suggesting it may be possible that the party could claim the state's governorship. It that happens, it would be a first for the Greens in Germany.

The fact that Mappus may have to vacate his position a mere 13 months after inheriting it from Günther Oettinger, who now represents Germany as the European Union's energy commissioner in Brussels, is not entirely the result of the nuclear disaster in faraway Fukushima. Mappus has long had the reputation for being brusque and no-nonsense, uninterested in nuance. In early March, for example, he got into hot water for suggesting that Stuttgart Mayor Wolfgang Schuster, also of the CDU, wouldn't be running for re-election -- a comment that was widely seen as an effort to push Schuster out of office.

Mappus has also found himself on the wrong side of large-scale protests against the exorbitantly expensive renovation of the Stuttgart train station and downtown area. The project, called Stuttgart 21, has become a rallying cry for leftists across Germany, all the more so after a demonstrator was badly hurt by a water cannon last autumn. Police violence in efforts to break up repeated protests at the site did Mappus no favors.

A further miscalculation came to light this week. Looking to profit from last autumn's now defunct decision to extend nuclear reactor lifespans, Baden-Württemberg bought a €4.7 billion ($6.6 billion) stake in the energy company EnBW last December. A close CDU ally of Mappus, Dirk Notheis -- who is the German head of Morgan Stanley -- took care of the details. The daily Stuttgarter Nachrichten reported that Notheis told Mappus at the time that "the EnBW deal is a fantastic deal for Baden-Württemberg -- unless, of course, a nuclear reactor explodes somewhere."

EnBW owns the Neckarwestheim I plant which has now been permanently shut down. The Philippsburg I power plant, which is among those that have been temporarily taken offline, also belongs to its nuclear portfolio. More than half the company's electricity comes from nuclear power. Now, its profits are expected to plummet -- and with them, the value of Baden-Württemberg's investment.

In the end, though, Sunday's election will be read first and foremost as a referendum on Merkel's leadership. Should Mappus lose, Merkel will be singing the blues. 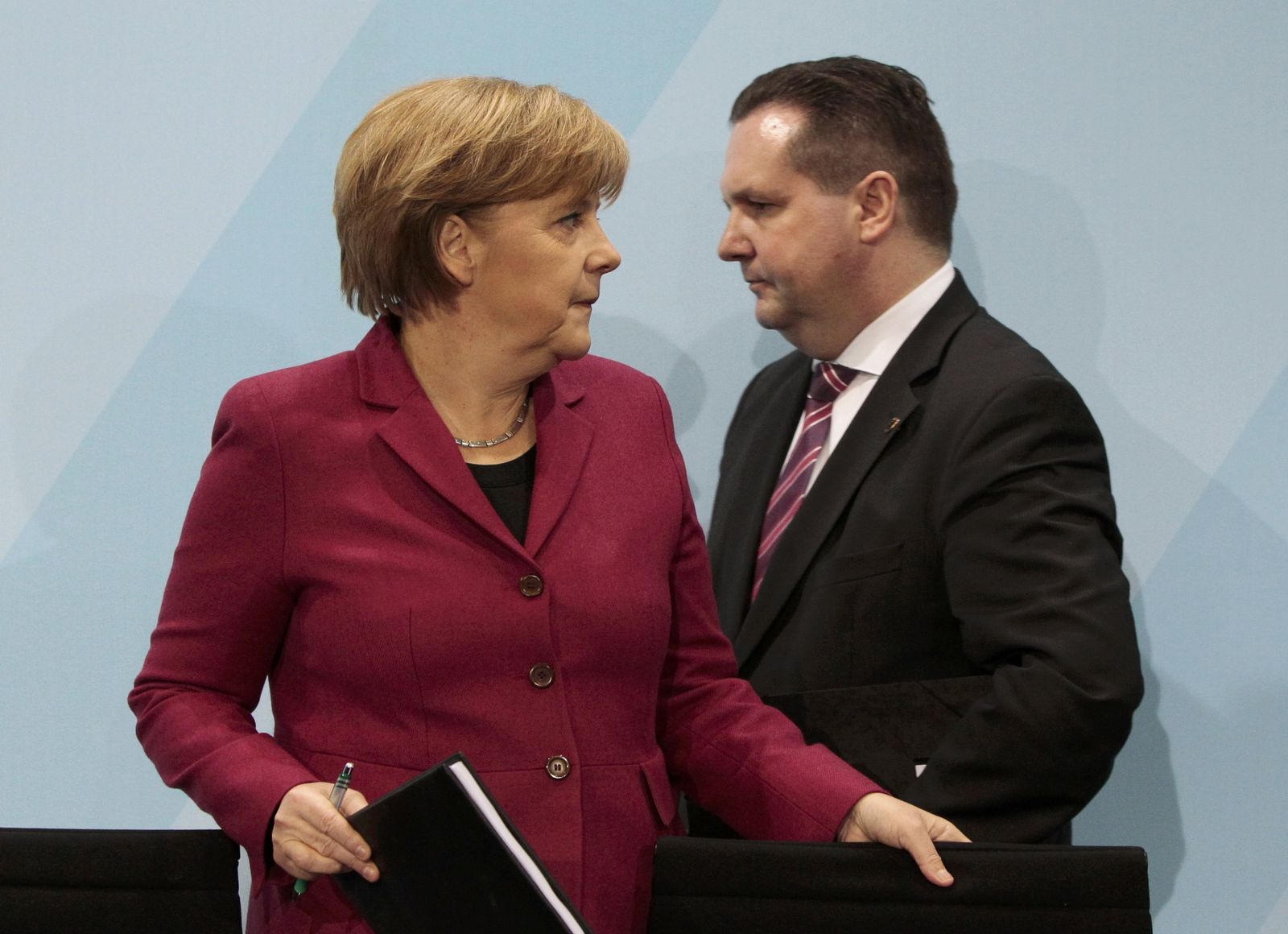 German Chancellor Angela Merkel and Baden-Württemberg Governor Stefan Mappus have both struggled with their credibility on nuclear energy in the last two weeks.