German Foreign Minister Guido Westerwelle, who is openly gay, has rejected criticism of his decision to take his partner, Michael Mronz, on an official trip to South America with him.

Mronz is an event manager who organizes sports events. Critics have accused Westerwelle and Mronz of failing to keep their professional and private lives separate.

Asked to comment on the criticism, Westerwelle said: "I am pleased that Herr Mronz is taking the time to accompany me at his own expense to inform himself about social projects in the region and get involved in them. We want to continue that, and we will." 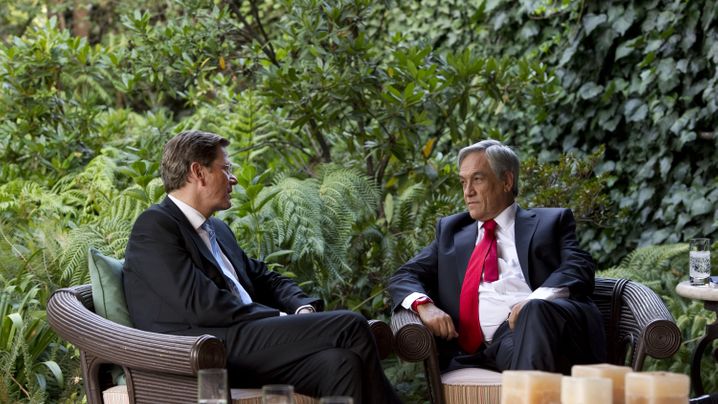 Westerwelle is currently on a week-long trip to South America with a delegation of business people including Mronz. They are touring Argentina, Uruguay and Brazil, and they made a short stop in earthquake-shaken Chile.

SPIEGEL reports in its latest edition that Westerwelle, who is also deputy chancellor and leader of the pro-business Free Democrat Party (FDP), has been taking friends and party donors on official trips abroad, and that he took part in a ceremony that Mronz had helped organize to mark the opening of a luxury hotel in Bonn.

In Buenos Aires on Tuesday, Westerwelle said: "For me, promoting German business interests is a foreign policy priority because it is about jobs in Germany. That is why it is good if I am accompanied by a high-ranking business delegation."

That, however wasn't the issue. No one is attacking him for taking a business delegation with him. That is standard practice. The criticism concerns the presence of FDP donors in the delegation, but Westerwelle so far hasn't responded to his critics.

According to SPIEGEL, Westerwelle's official trips sometimes resemble FDP outings where friends, political allies and donors can spend some fun days together. Mronz accompanied Westerwelle for the first time -- likely at his own expense -- in January on a trip to Estonia, Japan and China. That was unusual, as Westerwelle's predecessors had only rarely taken their spouses along on official trips. But it was permissible.

However, contrary to most ministerial spouses, Mronz is a businessman, and the delegation accompanying Westerwelle in January included people Mronz knew, such as Reinhard Zinkann, the managing director of household appliances manufacturer Miele, which was one of the sponsors of an equestrian tournament in Aachen for which Mronz provided marketing services.

Zinkann is also part of Westerwelle's delegation in South America this week, along with Ralph Dommermuth, the founder of United Internet AG, who is a friend of Westerwelle, a business partner of Mronz and whose firm donated €48,000 ($65,000) to the FDP in 2005.

Christoph Walther, the former communications chief of tobacco company Reemtsma and of DaimlerChrysler who also once acted as campaign adviser to the FDP, is also on Westerwelle's jet in South America.

The trip is also an opportunity for Westerwelle to return a favor to Michael Gotthelf, the owner of the Munich-based financial consultancy MG Financial Investment Services, who has been a friend of the FDP for decades. Two years ago, during a Bavarian regional election campaign, he invited Westerwelle to join him along with Munich's high society on an raft excursion down the Isar River.

'Westerwelle is Damaging his Office'

Party donations, corporate events, conspicuously staffed business delegations in the government jet -- none of this is illegal. This isn't about bribes or financial advantages for the FDP leader. But it raises questions about the way he defines his job, and about the blurred lines between government office, party politics and private life.

The opposition Greens and the Left Party responded to the SPIEGEL report by calling on Westerwelle to reveal any links between party donations to the FDP and participation in foreign trips. The German public must be given the opportunity to judge "whether there were any illegal links and influence here," said Volker Beck, a leading member of the Greens. Ulrich Maurer, the deputy floor leader of the Left Party in parliament, said Westerwelle's behavior bordered on an abuse of office.

Thomas Oppermann, the parliamentary manager of the Social Democrats, the biggest opposition party, told the Rheinische Post newspaper on Wednesday: "I have big doubts if Westerwelle is fit to be foreign minister."

"Westerwelle is damaging his office if business people who donated money to the FDP before the election are preferentially allowed to accompany the foreign minister on business trips and use him to open doors for them," said Oppermann.

SPD floor leader Frank-Walter Steinmeier, Westerwelle's predecessor as foreign minister, said there was nothing wrong with a minister taking business delegations with him on foreign trips. "But one should avoid giving the wrong impression," Steinmeier told the German N24 channel on Tuesday.

The controversy comes at a bad time for Westerwelle. He and his party have been accused in recent months of just serving their own clientele of well-off business people after it emerged that a rich hotel owner paid a large donation to the FDP ahead of the September 2009 election, after which the FDP pushed through a tax cut for hotel stays. The party returned to power in the election and is junior partner to Chancellor Angelea Merkel's conservatives.

Merkel's own Christian Democrats (CDU) have also been accused of blurring the lines between government and party politics after the party offered business people meetings with CDU governors in two regional states in return for cash.

Separately, Westerwelle has also been criticized for making inflammatory remarks about welfare benefits paid to the long-term unemployed.

The opinion poll ratings of both the FDP and the CDU have been sliding ahead of an important regional election in the state of North Rhine-Westphalia in May. The state is ruled by a center-right CDU-FDP coalition. The most recent opinion poll by the Forsa institute published this week showed the conservatives and FDP together scoring 41 percent -- three points down from last week, and their lowest joint rating since 2001.

Meanwhile Mronz, 43, who is also a member of the German charity "Ein Herz für Kinder" (A Heart for Children), told the mass-circulation Bild newspaper on Wednesday: "I want to help the weakest people on this planet -- children. Precisely because we have no children of our own I want to show a heart for children. Whenever I can make time I want to accompany Herr Westerwelle on his trips in order to provide social help for children. Of course I am traveling at my own expense."

As part of the South American trip, Mronz, the sports events organizer, will be accompanying Westerwelle to Brazil, which will host the 2014 World Cup and the Olympic Games in 2016.