Chancellor Angela Merkel faces what amounts to a vote of confidence in her leadership on Wednesday when a special parliamentary assembly will elect a new president. Her popularity has plunged since her re-election in September due to growing rifts in her center-right coalition, criticism of how she handled the euro crisis and anger at an austerity package many believe is socially unjust. She urgently needs the result to go her way or she could face the biggest crisis of her political career.

Merkel has nominated Christian Wulff, 51, a career politician from her conservative Christian Democratic Union (CDU) party who has been governor of the northern state of Lower Saxony for the last seven years. He is regarded as a safe but uninspiring choice for the largely ceremonial post as German head of state which became vacant after the surprise resignation in May of previous incumbent Horst Köhler.

Unfortunately for Merkel, the opposition center-left Social Democrats and Greens have nominated a more popular candidate who even members of Merkel's own coalition believe would make a better president than Wulff -- Joachim Gauck, 70, a former anti-communist human rights activist in East Germany, who was in charge of the administration of the Stasi secret police files after German reunification.

Merkel's CDU, along with its Bavarian sister party, the Christian Social Union (CSU), and their coalition partner, the pro-business Free Democrat Party (FDP), have a majority of 21 in the parliamentary assembly of 1,244 delegates that will convene at noon, German time, to elect the president.

The Federal Constitution states that delegates are free to vote for whomever they want, but delegates have come under intense pressure from their party chiefs to toe the line. The coalition parties know what is at stake -- if Merkel fails to get her candidate approved, her authority will be so badly damaged that her chancellorship could be in danger.

The Federal Assembly, a body which only convenes for presidential elections, has in fact been hijacked by party political interests. Wednesday's vote will not be a true election. 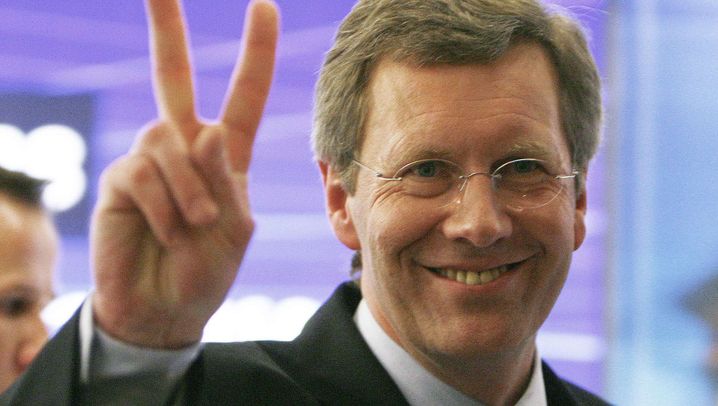 Merkel picked Wulff to pacify her restless, dissatisfied party. The opposition picked Gauck to damage Merkel because they knew he would be an attractive candidate for conservatives. After all, the charismatic pastor espouses traditional conservative views on the economy and immigration that his backers in the SPD and Greens find hard to swallow.

Several delegates from Merkel's coalition have broken ranks and said publicly that Gauck's biography is compelling -- his is a powerful story about the struggle for freedom and democracy. He has something to say to Germans, and he's a political outsider. No one is quite sure what Wulff's message would be after a lifetime spent in career politics during which he came up with few policy initiatives of note.

What gives parties the right to take the state and other public institutions hostage? Their dominance is particularly blatant this time. Christian Wulff is a product of this political system. Joachim Gauck has led a very different life.

It would be intriguing to see what would happen if the assembly were really free to choose between these two candidates. But it isn't free because this election isn't about picking the best candidate. Instead, Wednesday's vote is about how long Angela Merkel will be able to remain chancellor. If her candidate fails, the rumblings in her coalition could escalate into outright unwillingness to carry on governing together. 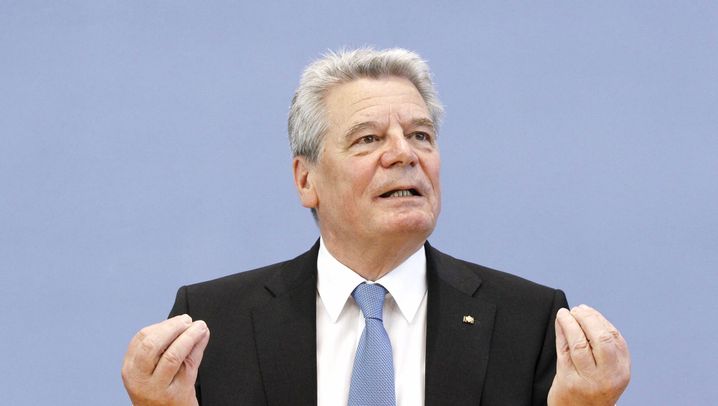 The 1,244 delegates -- half of them are the members of the Bundestag, Germany's federal parliament, and the other half are dispatched by the legislatures of the 16 regional states -- will have to decide whether they dare to make a free choice, and how seriously they take Paragraph 7 of the law on the election of the president by the Federal Assembly which states: "The delegates are not bound by mandates or instructions."

But June 30 is more likely to be a day of cold political calculation. Even Angela Merkel's support for Wulff won't be wholehearted. It's an open secret in Berlin political circles that Wulff, behind a façade of friendly smiles, rarely misses an opportunity to badmouth the chancellor behind her back. Merkel knows that. So why did she nominate him?

Merkel, who spent the first 36 years of her life in communist East Germany before making a lateral move into politics, was never a typical CDU member. That gave her the freedom to reform the party, to make it more environmentally friendly and to nudge it to the left. In doing so, she sidelined a powerful bloc of western party barons and gradually bled it dry. One of her main detractors, Hesse Governor Roland Koch, a conservative hardliner, resigned last month.

Wulff is the last of those CDU strongmen left. In her fight to keep them at bay and modernize the party over the last decade, Merkel, the Protestant easterner, has used up a lot of credit in the western, Catholic-dominated CDU. At this point she doesn't have the confidence to test her party's tolerance any further, for example by nominating an independent candidate for the presidency, or Labor Minister Ursula von der Leyen, who would have been an obvious choice as Germany's first female head of state.

Merkel, the expert power-broker, was suddenly powerless. She admitted as much to Bavarian Governor Horst Seehofer, the head of the CSU. She told him she would face resistance in the CDU to von der Leyen, a political ally of hers. She didn't want to overstretch her party, so she nominated Wulff. It wan an act of weakness, intended as a sedative for a party troubled by a slide in opinion polls and her own weak performance as steward of an unhappy center-right alliance with the FDP.

But the choice of Wulff backfired because the SPD and Greens landed a coup with their rival nominee. Gauck's conservative views make him a tempting candidate for the CDU, as members of Merkel's party informed her to her evident displeasure.

The CDU leadership responded by trying to streamline the makeup of the Federal Assembly as much as possible. Potential coalition delegates who have voiced a preference for Gauck have either been dropped or had their arms twisted to change their minds. The former interior minister of the eastern state of Brandenburg, Jörg Schönbohm, had already been selected as a delegate when he said in remarks published in SPIEGEL that he favored Gauck. He quickly backtracked, saying Wulff would of course be elected in the first round "and will also be getting my vote."

Two former presidents from the CDU, Richard von Weizsäcker and Roman Herzog, have said the vote should be free. Their remarks haven't made life easier for Merkel.

Party leaders of the CDU and FDP have tried to ensure that the regional parliaments only send delegates who can be trusted to vote along party lines.

But some CDU delegates are rebelling and backing Gauck out of revenge for Merkel's center-left policies over the years. In Hesse, some also blame her for Koch's resignation, saying he quit because she refused to give him an attractive job in her cabinet. Among delegates from the Bundestag, there are several who are angry at having being passed over for jobs in the new government.

'Wulff Needs to Explain Why I Should Vote for Him'

No one knows how many rebels there will be or the level of their determination. The FDP has four delegates who have openly said they will back Gauck. And there are many in the party who appear to be of two minds. The head of the FDP's parliamentary group in the state assembly of Thuringia in eastern Germany, Uwe Barth, said last week he hadn't decided yet who to vote for. "My heart favors Gauck," he says, adding he wanted to have a one-to-one conversation with Wulff before the vote. "He first needs to explain to me why I should vote for him. The reason that it would stabilize Merkel and her coalition isn't enough for me."

The leaders of the SPD and Greens who picked Gauck claim their choice is evidence of their openness. But isn't Gauck also a means for them to get Merkel into trouble? "If the ruling coalition should stumble, it will be its own fault and not as a result of the choice of president," says the general secretary of the SPD, Andrea Nahles. It is true that the election has become a cliff-hanger because the coalition is in such a desolate state and its own members wouldn't shed many tears if it were to collapse. But the SPD and Greens wouldn't mind things getting a bit more desolate than they already are.

The Left Party, parts of which has its roots in the communist party that ruled East Germany bitterly opposes Gauck, the affirmed anti-communist, because of his role in uncovering the history of the Stasi secret police. The party has fielded its own candidate, former journalist Luc Jochimsen, 74, a member of the Bundestag. But even some members of the Left Party may feel tempted to switch allegiance to Gauck if it comes to a third round of voting. The president must win an absolute majority -- meaning more than 50 percent -- of votes to get elected but if he fails to get that majority in the first two rounds of voting, a third round is held in which the candidate wins who gets the largest number of votes.

No one knows if Merkel would actually fall if Wulff failed to get elected. If she doesn't want to quit, there are major constitutional hurdles to ousting her.

So how can the presidential election be freed from the shackles of party maneuvering? Jesse at Chemnitz University suggests having presidents directly elected by the people, but that would greatly enhance the political clout of the office and shift the balance of power in German politics. One alternative would be to ban any active politicians from being nominated. That would lead to a search for candidates outside the political sphere.

But even Wednesday's vote could be different. Merkel only has to say that every delegate should feel free to choose the candidate they think would make the best president. She would hand the election back to the delegates, and the Federal Assembly would regain its dignity.

In the Bundestag, imposing party discipline often makes sense because it prevents a breakdown in the mechanisms of power. But the president stands above the everyday politics of power, so other rules can apply to his election.

If the election were liberated in this way, no one -- not Merkel's party, not her coalition partner, not the opposition and not the media -- could interpret a defeat for Wulff as a blow to her authority.

Merkel would deserve respect for taking such a decision. 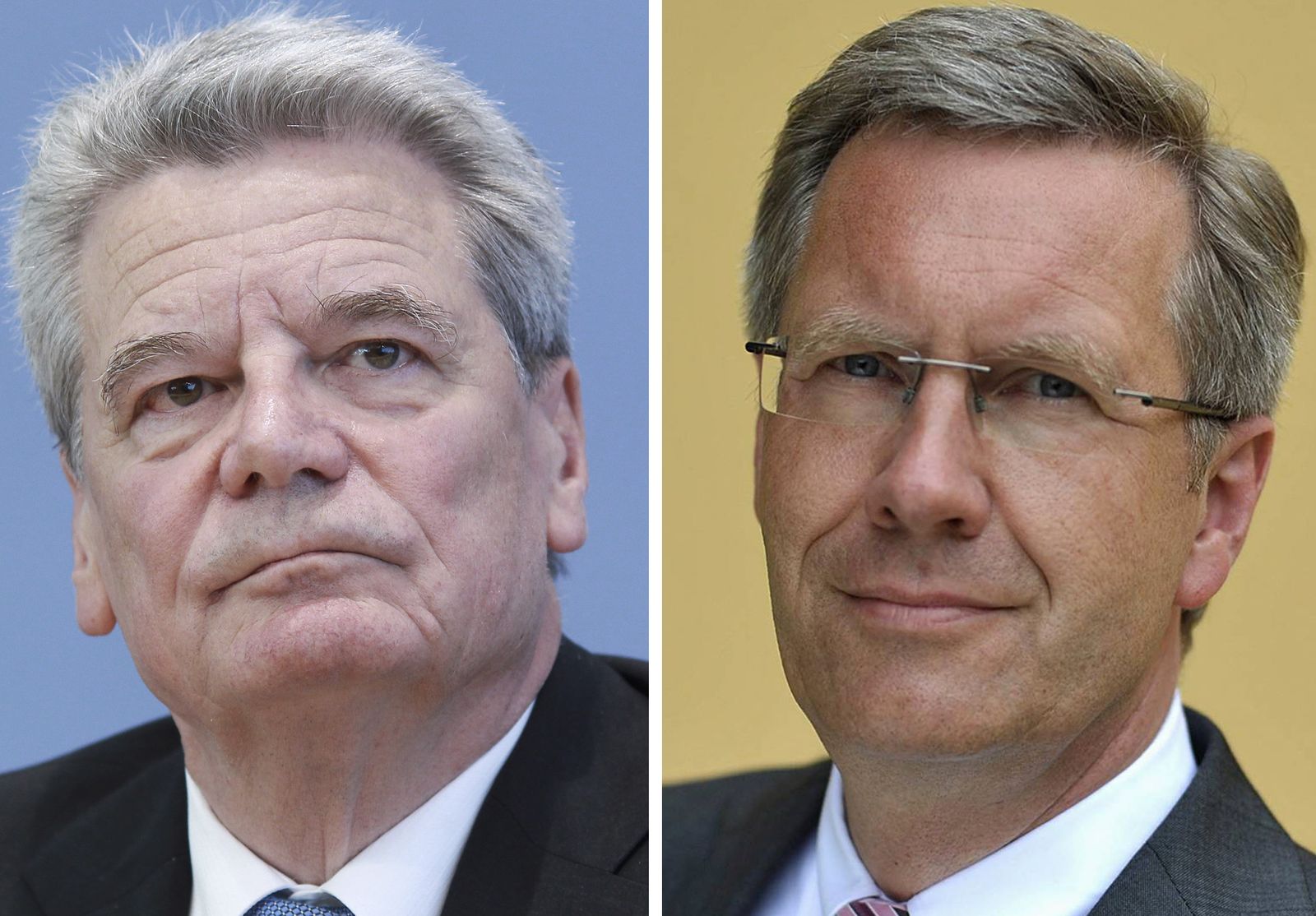 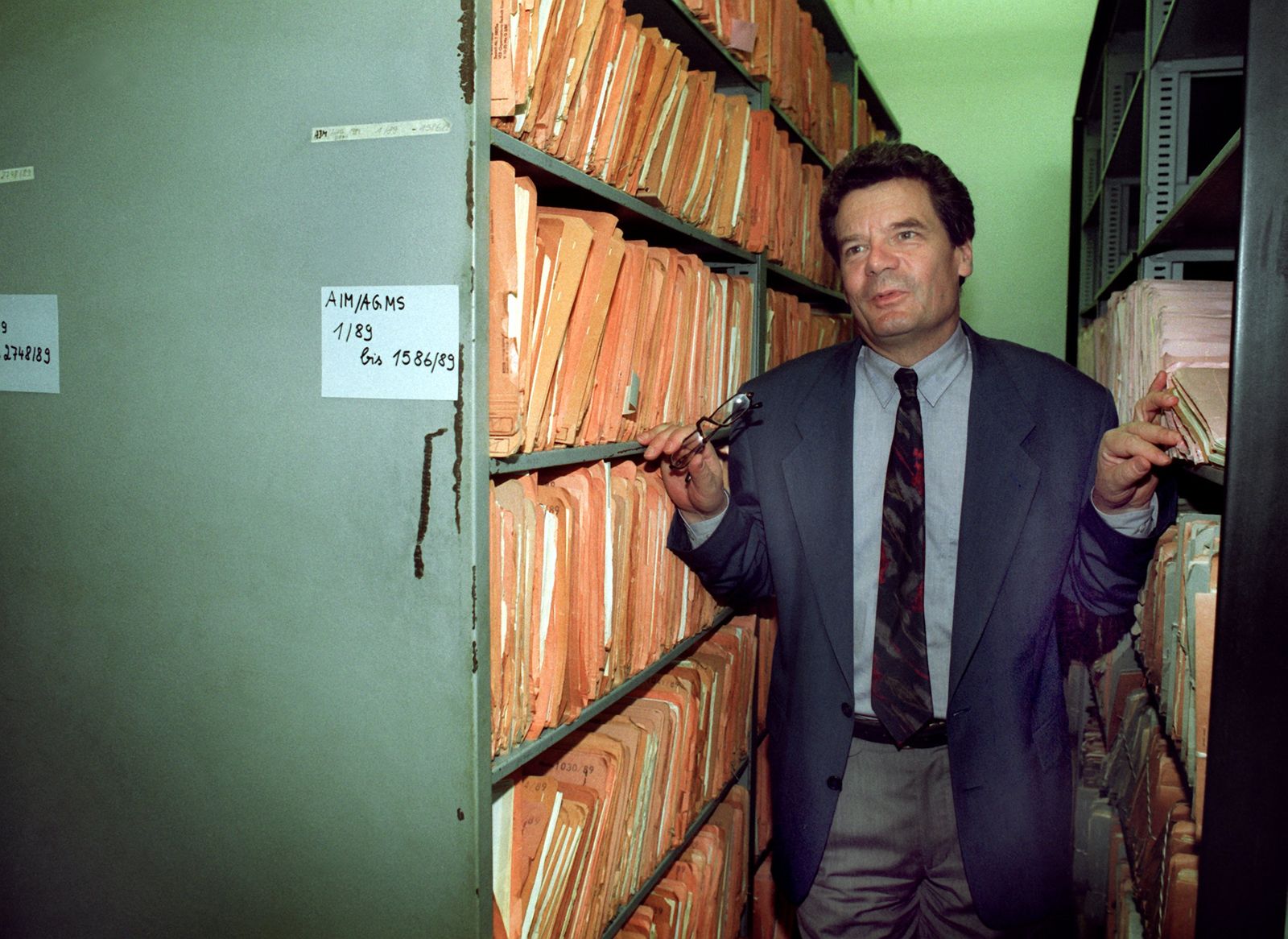 In 1990, Gauck became a member of the first freely elected East German parliament. Shortly thereafter, he was picked to oversee the administration of all of the records and documents collected by the Stasi, a total of 180 kilometers of shelf space containing private information on hundreds of thousands of citizens of the former East Germany. 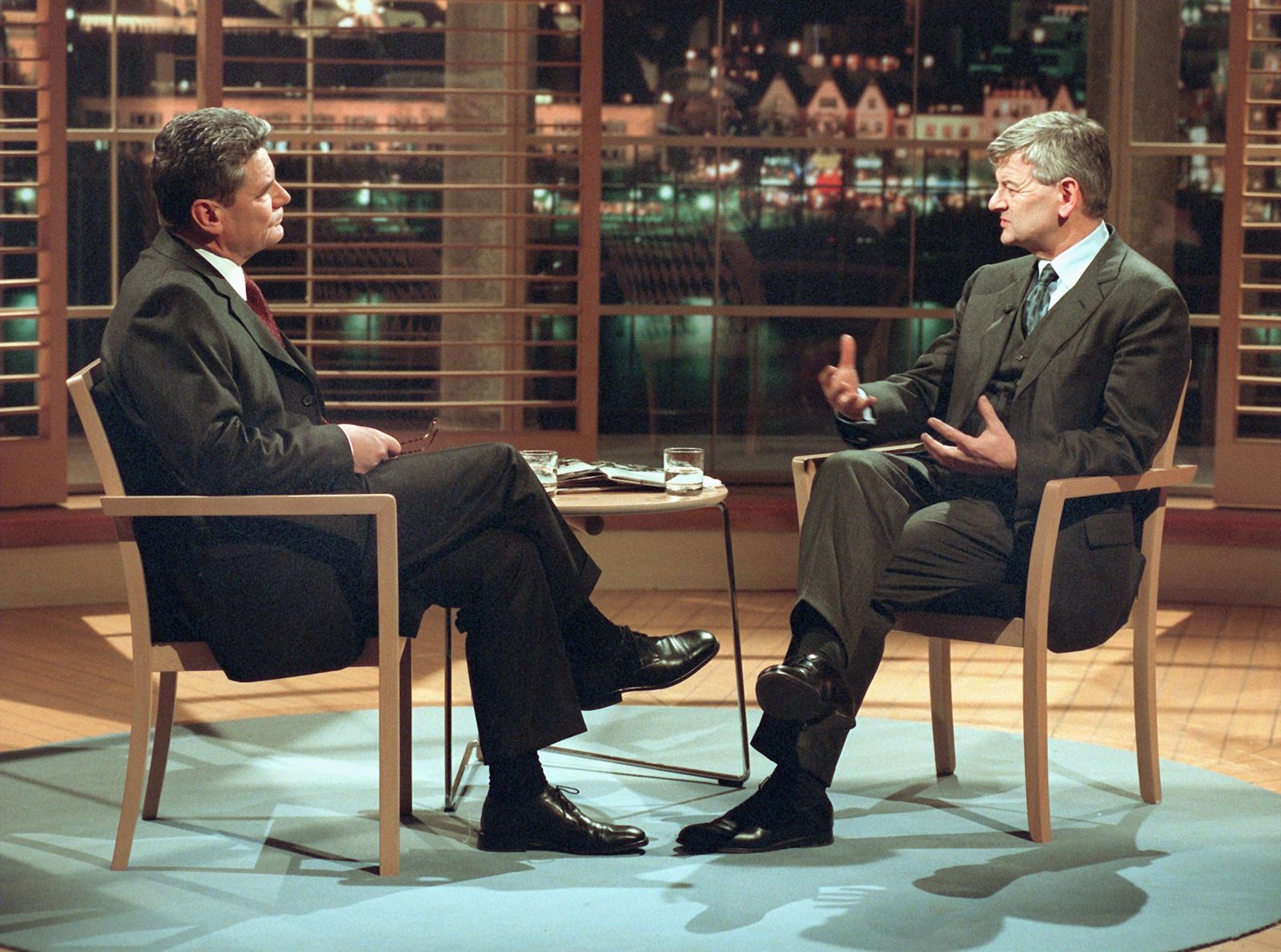 In 2001, Gauck tried his hand as a talkshow host. His first guest was then Foreign Minister Joschka Fischer and ratings were good. But viewers quickly lost interest and Gauck retired from television before long.