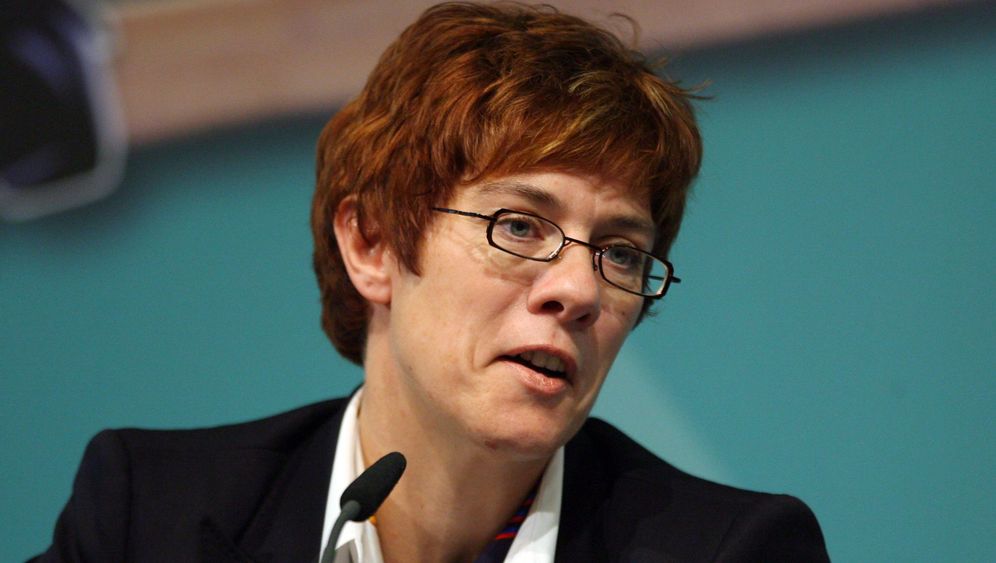 When Angela Merkel took over as German chancellor in 2005, she may have been the first female head of the federal government, but all 16 of the country's powerful state governors were men.

That male face of regional power in Germany, however, has been slowly changing. First the eastern state of Thuringia and then North Rhine-Westphalia in the west have since seen women take the helm. And now a third woman is soon to take the reigns of state power. This weekend, Annegret Kramp-Karrenbauer, a member of Merkel's Christian Democratic Union (CDU) party, was named as successor to Peter Müller, governor of western state of Saarland. So is Germany slowly becoming a bastion of women's power?

It may be premature to draw that conclusion, but it is certainly becoming less male-dominated. Kramp-Karrenbauer, a 48-year-old mother of three, belongs to a new generation of conservative women politicians who have managed to pursue successful careers while having children, something not always taken for granted in what can still be a very traditionalist country. Another example is the popular Labor Minister Ursula von der Leyen, a mother of seven.

Kramp-Karrenbauer, the most popular politician in Saarland according to opinion polls, has said that the "difficulties of combining a job and a family were what led me to become politically active in the first place."

'New Way of Thinking' in the CDU

"She is a CDU female politician who cultivates an image of a modern woman who combines family and career," says Bettina Munimus, a political scientist based in Berlin. "It is interesting that there are such women in the conservative CDU and that they are making their careers there. Things seem to be changing somewhat."

Doris Pack, a CDU member of the European Parliament and former head of the party's women's association, says things have indeed changed in the party. She says that there is a "new way of thinking" in the CDU, one which accepts that women want to work and have families.

It is a conundrum in Germany that while women are not well represented at all in the higher echelons of business, they do surprisingly well in politics, ranking 18th in the world for female participation in the national parliament, with just over 32 percent of representatives in the Bundestag being women. In comparison, none of the 100 top German companies has a female CEO, and only 2.2 percent of the members of their executive boards are women.

Kramp-Karrenbauer became Germany's first female state interior minister in 2000 and has been deputy leader of the CDU in Saarland since 2003. Following her nomination this weekend, she will be sworn in as state governor this summer, once Müller steps down.

Neither Kramp-Karrenbauer nor the female CDU governor of Thuringia, Christine Lieberknecht, had to face an election to clinch the top state job. Lieberknecht took over after the departure of Governor Dieter Althaus in 2009, who resigned after the party lost its absolute majority in the state elections of that year and did not even have enough seats to form a coalition with the pro-business Free Democrats. Lieberknecht became the CDU's first female state premier after forming a coalition with the Social Democrats.

'Women Often Seem to Need Male Mentors to Get Ahead'

Munimus says a feature of German politics is that women are often encouraged in their political careers by a male patron. "Women often seem to need male mentors to get ahead," she says. "Men, on the other hand, form old-boys' networks, and they help each other to forge a career. Women have yet to build explicitly female networks," she points out, adding that women often take over after a man has run into difficulties. "Either a man has to fail or has to go of his own accord to make room for them."

In many ways Chancellor Merkel fits into that mould. A protégé of former Chancellor Helmut Kohl, she took over the party in 2000 after Wolfgang Schäuble, the current finance minister, had to step down due to a party donations scandal. She then finally got her shot at the chancellorship after the failure of candidate Edmund Stoiber, former governor of Bavaria, against SPD Chancellor Gerhard Schröder in the 2002 election.

And the first-ever female governor in Germany, Heide Simonis of the Social Democrats, only came to power in the northern state of Schleswig-Holstein after her predecessor, Björn Engholm, resigned due to a scandal in 1993. Once in power, she remained governor for 12 years.

"Once women are in office, they are often very popular and are on a par with men in how they work," says Munimus, who has written a book on Simonis' career. "However, they have to break through this glass ceiling first."

Pack, however, takes issue with the term mentor. She argues that women have been given a helping hand by male "friends and colleagues with whom they have worked for years, who recognized their strengths and encouraged them."

Yet successful women in German politics are not solely reliant on male patronage. Hannelore Kraft, SPD leader of North Rhine-Westphalia, for example, fought a tough election battle in 2010 and then led difficult negotiations to form a minority coalition with the Greens that is tolerated by the Left Party. Both of the latter parties in that state, incidentally, are also led by women.

Other women could soon be joining the ranks of state governors. In Berlin, Renate Künast, the Green Party floor leader in the Bundestag, is seen as a serious challenger to incumbent Klaus Wowereit of the SPD in the state election there this coming September. Meanwhile, the CDU's Julia Klöckner could give the SPD governor of Rhineland-Palatinate, Kurt Beck, a run for his money in a state election in March.

Whatever their path to power, there is little doubt that the increasing number of women in German politics is shaping the country's political culture. There is less of the macho politics of old and more of a consensual approach. Long gone are the testosterone-fuelled Schröder-Fischer years of the SPD-Green coalition from 1998-2005 when Alpha males battled it out to get their way.

Munimus argues that the new fragmented party system, which increasingly requires the forging of coalitions, "has demanded a different leadership style. And that can often require a style that has more female characteristics: negotiation, openness, taking various positions into account."

"Women can sometimes work better in teams," Pack says, arguing that they have learned not to try to emulate male ways of exercising power. "One cannot react to everything immediately; sometimes one has to decide whether to act right away or reflect and then act," she says, pointing out that this is something that Merkel has certainly learned.

The ascent of women into powerful positions in the cabinet or in regional politics will encourage more young women to enter politics. "Women like Merkel and also many other younger women show that it is possible to succeed in politics," Mutinus says. "They show that women can hold the same public office as men and that they can act as a role models."