The death of three German soldiers in the northern Afghan city of Kunduz on Saturday has led to calls in Germany for a rethink of NATO's entire strategy in Afghanistan, with the opposition Left Party even demanding that Germany's 3,150 troops stationed there be brought home.

A suicide bomber blew himself up next to the soldiers as they were buying fridges in a busy market in the center of Kunduz. Five other German servicemen were wounded, two of them so seriously that they had to be put into an artificial coma for the flight back in a hospital jet which touched down at a military base near Cologne on Sunday night. Seven Afghan civilians were also killed and 13 wounded. It was the deadliest attack on German troops in Afghanistan since 2003 when four were killed in a suicide car bombing in Kabul.

The German government quickly declare that it remained committed to the Afghan mission. Chancellor Angela Merkel called the attack "perfidious murder that fills us all with disgust and horror.''

"The international community is determined to continue helping the people of Afghanistan to build a good future for their country," she said in a statement.

But the attacks have nevertheless sparked a debate about the mission. The country's premier current affairs talk show, the Sabine Christiansen show on Sunday night, changed its theme to Afghanistan and invited a new set of guests, and the media have given blanket coverage to the killings and their implications.

The head of the German army federation, a kind of trade union for the armed forces, said the West needed to overhaul its strategy in Afghanistan.

"The attack is suitable for a debate in Germany about whether the purpose of this mission can still be explained to our own soldiers and whether it's justifiable for them to risk their lives for something whose outcome is so doubtful," federation chief Bernhard Gertz told Mitteldeutsche Zeitung newspaper.

"One has to ask the question about the sense of the Afghan mission even more clearly than before -- so clearly that it cannot be overlooked. If there isn't a radical change in the overall strategy we're at risk of failing in Afghanistan."

Gertz said that apart from holding elections, no decisive goals had been achieved in Afghanistan. "I'm not going so far as to say we have to pull out. That would be a knee-jerk reaction that wouldn't be appropriate. But there needs to be a debate."

Left-wingers who have been critical of the mission all along seized on the attack to voice fresh misgivings. "My doubts about the purpose of the mission have grown," said Ottmar Schreiner, a member of the left wing of the Social Democrat Party which shares power with Merkel's conservatives.

"I see no sustainable future prospects in the civilian area that would justify further military intervention," Schreiner told the newspaper Bild. The entire mission needed to be reviewed, he said. 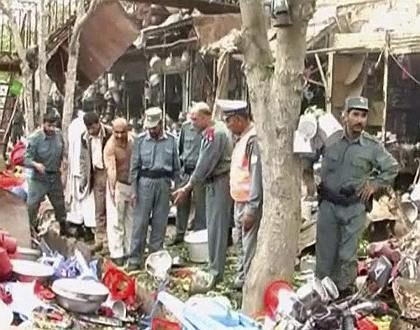 A video grab shows Afghan soldiers at the site of a suicide bomb blast at a market in Kunduz.

Another prominent left-winger, Oskar Lafontaine, said the German army was "indirectly involved in terrorist actions" with its reconnaissance flights by Tornado jets to assist troops of the NATO-led International Security and Assistance Force (ISAF) fighting the Taliban in the south and east of the country.

Lafontaine, leader of the parliamentiary group of the Left Party, said terrorism was defined as the unlawful use of force. "Under this definition Bush and Blair and others are terrorists because they have used force unlawfully on a large scale in Iraq and hundreds of thousands have died," he told the Christiansen talk show. The same was true of Afghanistan, he said.

Germany's contingent is stationed in the northern part of Afghanistan, which has had relatively few attacks and is considered much safer than the south, where most of the fighting has been taking place.

Merkel's government has resisted pressure from other NATO members to send ground troops to the south and east, where US, British, Canadian, Dutch, Estonian and Danish troops have born the brunt of combat operations against the Taliban.

However, Germany agreed, after anguished debate, to deploy six Tornado jets in April to support ISAF troops in the south with aerial reconnaissance.

Citha Maass, an Afghanistan analyst at the German Institute for International and Security Affairs (SWP), said the north was likely to become more unstable. 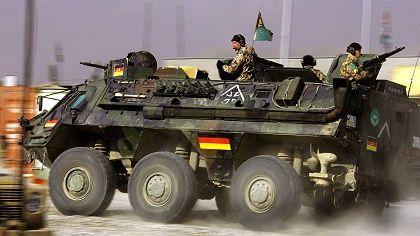 A German armored personnel carrier driving through the Afghan capital of Kabul.

"Since the spring we have been expecting an increase in attacks in the north. The more the Taliban are put under pressure in the south the more they try to shift to easier areas such as the north," Maass told SPIEGEL ONLINE. "At the moment it looks like Saturday's attack was primarily targeting international troops rather than specifically German ones."

She said the attacks were part of the Taliban's policy to pressure NATO countries into withdrawing their troops. "If we don't resist that we would be playing into their hands."

Britain has lost more than twice as many service personnel as Germany in Afghanistan -- 55 since 2001 as opposed to 21 German troops killed -- but deaths don't spark debate in Britain on the scale of the one now raging here.

Chastened by the military aggression of the Nazi era, Germany retains a strong pacifist streak and only recently started taking a more prominent role in military missions abroad, once its full sovereignty was restored through unification in 1990.

Former Chancellor Gerhard Schröder had to put his job on the line in 2001 with a parliamentary vote of confidence to force rebels in his government to back the deployment of troops to aid the US war on terror in Afghanistan and elsewhere. He went on to win a general election a year later by opposing the US-led war in Iraq.

The makeup of the army is a further factor. "We have a conscript army, countries like the UK and Canada have professional armies. There's a huge difference," said Maass.

Nevertheless, the government is virtually certain to resist calls for a troop withdrawal, even when a parliamentary vote on renewing Germany's ISAF mission in Afghanistan falls due in October.

Defense Minister Franz Josef Jung said German troops wouldn't be confining themselves to barracks despite Saturday's attacks. "If we are to win people's trust we have to have contact with them," he told German radio.

"We mustn't let perfidious murders like this divert us from our goal of stabilizing Afghanistan and making it develop peacefully," he said.

Maass of the SWP think tank said she hoped the latest attack in Kunduz and another one in the eastern town of Gardez on Sunday in which at least 10 civilians died would reinforce a debate within NATO about changing its strategy in the south.

"They need to cut the number of civilian casualties of the fighting and concentrate more on economic restructuring, difficult though that is," she said.