Chancellor Angela Merkel's government has effectively been on hold for months pending a regional election on Sunday, May 9, in Germany's most populous state, North Rhine-Westphalia.

Major domestic reforms of healthcare, the tax system and energy policy have been shelved because Merkel's conservative Christian Democrats and their coalition allies, the pro-business Free Democrats, have been at pains to avoid spoiling their chances of remaining in power in this key western state of 17 million inhabitants, home to the industrial Ruhr region.

In their jockeying for votes, the two parties have been trying to score points off each other. Their inactivity and persistent in-fighting in Berlin could end up losing them the election, which would rob Merkel of her center-right majority in the Bundesrat, Germany's upper legislative chamber. That means she would need opposition approval for any major policies. If North Rhine-Westphalia (NRW) doesn't go Merkel's way on Sunday, she will be considerably less powerful.

Some critics say Merkel spent weeks stonewalling on aid for Greece because she didn't want to take any unpopular measures to bail it out with German taxpayers' money before the NRW vote. In truth, though, the debt crisis hasn't been a dominant factor in the campaign, and the major opposition parties have not been campaigning against a Greek rescue.

Opinion polls indicate a neck-and-neck race between the center-right coalition of governor Jürgen Rüttgers, who has been beset by series of minor but damaging scandals in recent months, and the center-left camp of Social Democrats (SPD) and Greens. But the vote could lead to a variety of alternative coalitions including a tie-up between Rüttgers' Christian Democratic Union (CDU) and the Greens, or an alliance between the SPD, Greens and Left Party.

Nothing is certain at the moment -- apart from the fact that the May 9 election will change Germany's political landscape. For Merkel, it will mark the end of what has in effect been a domestic policy sabbatical ever since her re-election last September. "Waiting for NRW" has been the true leitmotiv of Merkel's center-right government. After May 9, she will have to show whether she wants to reform Germany -- if she still can. She will no longer be able to avoid the big issues.

The big question will be how much room for maneuver she will have left after Sunday. Her strategy could end up as a large paradox. She shied away from action because she was afraid of the voters. But the vote itself may deprive her of the power to take decisive action.

Her fate is now in the hands of the pale Rüttgers, who managed to end four decades of Social Democrat rule in the traditional SPD bastion of NRW in 2005 by riding a wave of opposition to radical welfare cuts imposed by the center-left government in Berlin at the time under Chancellor Gerhard Schröder.

Rüttgers has tried to keep disgruntled former SPD supporters on his side by espousing traditionally center-left policies, and he occasionally succumbs to controversial bouts of populism to spruce up his dull image. Last August he was heavily criticized for suggesting in a campaign speech that Romanian workers were lazy. In 2000, when he was campaigning against government plans for a Green Card to ease immigration restrictions for software engineers from countries such as India, he faced accusations of xenophobia for using the slogan "Children Instead of Indians" ("Kinder Statt Inder"). He had argued in favor of promoting homegrown talent.

Rüttgers had hoped to score points by distancing himself from the increasingly unpopular infighting within Merkel's coalition in Berlin. But his lead over the SPD has crumbled in recent months amid allegations of irregular party funding. SPIEGEL broke the story in February that the CDU had offered local companies meetings with Rüttgers in exchange for money. He says he knew nothing of these offers, but the "rent-a-Rüttgers" controversy has overshadowed his election campaign.

Then, and potentially even more damaging, SPIEGEL reported this week that during the 2005 election campaign in NRW, the CDU funded the creation of a supposedly independent voters' initiative called "Voters for Change" which published large newspaper advertisements backing Rüttgers. The group collected donations from celebrities and prominent businesspeople in the state but not a cent of the money was listed as donations in the CDU's accounts, SPIEGEL reports.

Even close aides of Rüttgers think that the practice was in breach of Germany's party funding law. The matter is being investigated by the Bundestag, the country's lower house of parliament, and the party is bracing itself for a fine.

The irregularities that have whittled down the CDU's lead in a matter of weeks aren't just a sign of ineptitude -- they suggest that the CDU's leadership in the state has lost a sense of what constitutes acceptable political behavior.

'The Election is on a Knife Edge'

"I said many months ago that the result will be very tight," Rüttgers told SPIEGEL in an interview this week. "The election is on a knife edge. That's because NRW is not a traditional CDU state. And until a few weeks ago we lacked strong tailwind from Berlin."

Rüttgers played down the party funding controversy over "Voters for Change." "It was a voters' initiative of the kind that one often gets in elections," he said. "People did honorary work to campaign for a new start in NRW. And that new start happened." Asked about the failure to register income from the initiative in CDU accounts, Rüttgers said: "That's not the case. But to make sure we're having that investigated by the president of the Bundestag."

But despite all the campaign setbacks, Rüttgers has an array of alternative coalition options if his center-right alliance loses its majority on Sunday.

He could stay in power in a coalition with the Greens or with the SPD. He may favor the latter option because it could pave the way for what CDU insiders believe to be his ultimate ambition -- to succeed Horst Köhler as German president in 2014. Forging an alliance with the SPD in NRW could help secure him the necessary SPD support to achieve that goal.

However, many in the CDU would prefer an alliance with the Greens, something that would have been unthinkable a few years ago given the Greens' roots in the pacifist, anti-nuclear protest movement of the 1970s. Under Merkel, though, the CDU has shifted to the left and embraced environmental issues. The Greens in turn have opened themselves up to the CDU and now govern in coalitions with the CDU in the small southwestern state of Saarland and in the northern city-state of Hamburg.

If those two parties were to join forces in a state as large as NRW, it would mark a sea change in German politics because it would open up the possibility of a national CDU-Greens government one day.

The Greens have become the key party in Germany's political system because they can swing from left to right. But for the moment, Merkel has no interest in such experiments. A continuation of the center-right coalition in NRW would suit her best. If Rüttgers were forced into an alliance with the Greens or the SPD, she would effectively be getting another party around her cabinet table in Berlin. She would have lost her majority in the Bundesrat, which is made up of delegates from Germany's 16 states and which can block and force amendments to key legislation.

At present, the CDU and FDP together have 37 of 69 votes in the Bundesrat. If the center-right loses control in NRW, which accounts for six votes in the chamber, she will no longer be able to get legislation through parliament without the votes of the center-left opposition. German politics would descend into endless mediation between the governing and opposition parties.

Rüttgers' challenger in NRW, regional SPD leader Hannelore Kraft, has vowed to turn the state into a "bulwark" against Merkel's center-right policies if the SPD gets into the state government.

A CDU-Green alliance in NRW would put Merkel's coalition under added strain. FDP leader Guido Westerwelle, Germany's foreign minister, has long suspected that Merkel is secretly laying the foundations for a CDU-Greens alliance at the national level. He is determined to loosen his party's ties with the CDU if the CDU goes with the Greens in NRW. One opportunity could present itself in March 2011 in a state election in Rhineland-Palatinate, where the FDP could decide to join forces with the SPD.

So the NRW election on Sunday could mark the beginning of the end of the traditional alliances in German politics. Germany would enter a new age of "swinging politics" -- everybody could theoretically get into bed with everyone else, if they so desire. 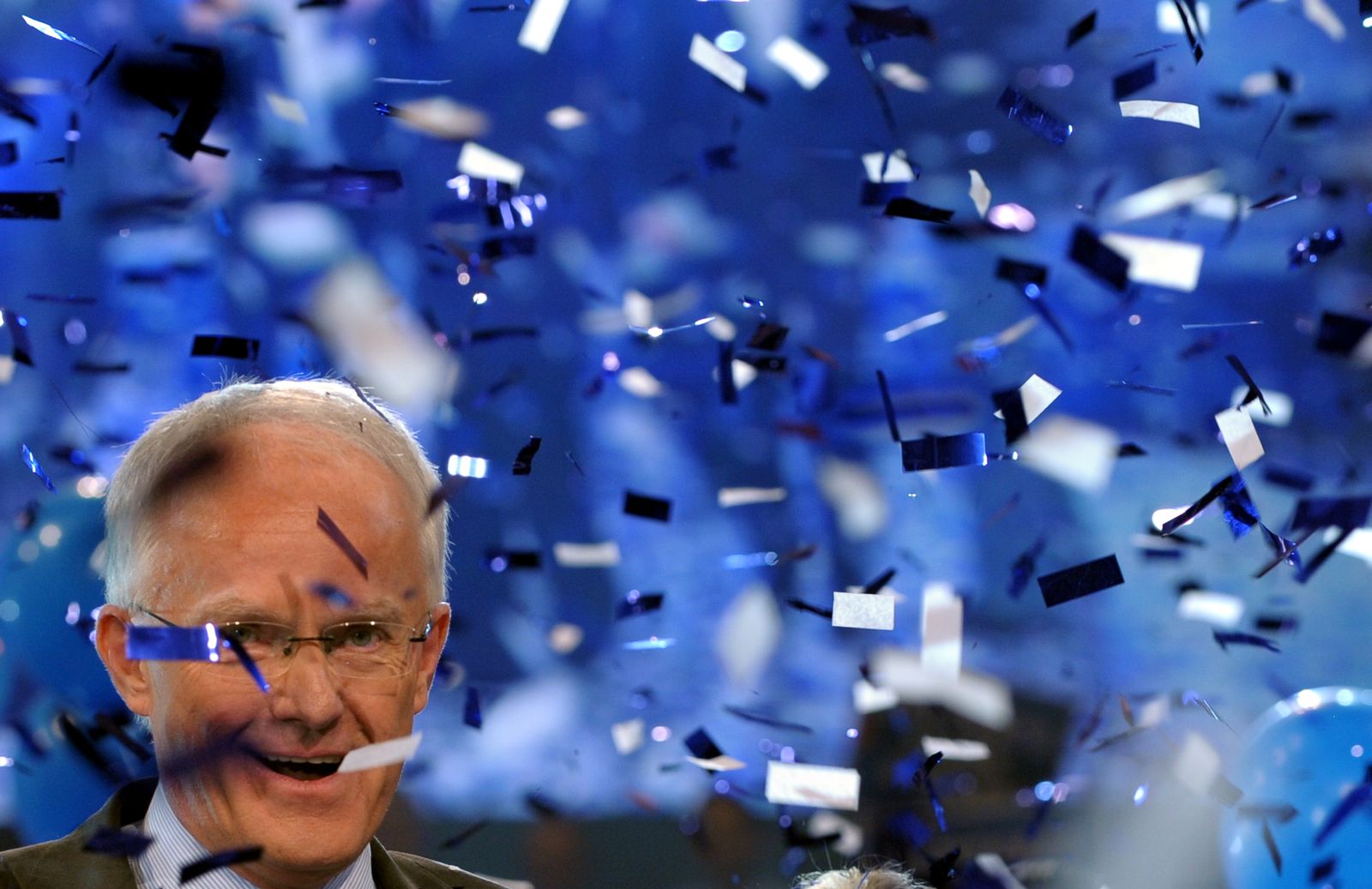 The governor of North Rhine-Westphalia, Jürgen Rüttgers, is fighting to hold onto power.