It was supposed to be a good day for the Free Democratic Party. Gathered in Stuttgart for their annual Epiphany convention, the pro-business party and junior coalition partner to Chancellor Angela Merkel's center-right government had hoped that it could finally begin to put an end to months of bickering and paltry public support.

Party head Philipp Rösler did his best during his Friday speech. "The social market economy is the economic model of freedom," he belted into the hall. "Economy, growth and prosperity: That is what we stand for," he said. We now have to "make it clear that the FDP is indispensable in this country."

The time was a little bad though. Rösler's speech began at exactly 12 noon. Just 20 minutes later, the state government of Saarland collapsed -- a government to which the FDP belonged. Even worse, Governor Annegret Kramp-Karrenbauer, of Merkel's Christian Democrats, was devastatingly clear about who was to blame.

"The months-long discord within the FDP state parliamentary group and the state chapter of the FDP are, in the opinion of Governor Annegret Kramp-Karrenbauer, no longer consistent with the responsibility of securing the state's future," read a statement sent to journalists.

That, though, wasn't all. A new survey released on Friday, conducted by the pollsters at Infratest for German public television station ARD, found that, were elections to be held on Sunday, just 2 percent of Germans would vote for the Free Democrats. Some 83 percent of those asked said that the FDP has not delivered on its promises. A further 72 percent say that it isn't clear where the party stands when it comes to the euro crisis. Just 15 percent of Germans think the party is credible.

It is an incredible fall for a party which used to be the kingmakers of Germany's political landscape. For decades after the war, the FDP formed governing coalitions with the CDU as well as, at times, with the center-left Social Democrats (SPD). When the party scored an all-time high of 14.6 percent in the 2009 general elections, it seemed as though the FDP's place in the German political landscape was clear.

Since then, however, it has been all downhill. Then party-leader Guido Westerwelle, who is currently Germany's foreign minister, showed an inflexible obsession with tax cuts, despite the dark economic clouds gathered overhead. Merkel ultimately was forced to humiliate Westerwelle with a categorical rejection of the plan. And the FDP swoon began in earnest.

In five state elections in 2011, the FDP failed to top the 5 percent hurdle necessary for representation in state parliaments. In Berlin city-state elections in September, the FDP managed just 1.8 percent. After the collapse of the Saarland government on Friday, the FDP is now part of just five of 16 state governments. Westerwelle was forced to step down from the party leadership early in the debacle, but the party has not shown many signs of life since.

Indeed, in December, the party once again made headlines for insider bickering and political ineptitude when General Secretary Christian Lindner, once touted as one of the FDP's young, up-and-coming stars, suddenly resigned. Many interpreted the move as one of selfless sacrifice -- a last ditch effort to give Rösler a few more months to turn the FDP ship away from the iceberg.

No Room for the FDP

Others, however, saw it as an attempt by Lindner to avoid being too sullied by the political swamp in which his party is currently wallowing. After all, the next state elections are just around the corner. Voters in the northern state of Schleswig-Holstein go to the polls in May. Should the FDP not leap the 5 percent hurdle there -- and polls indicate they might not -- then the Rösler era will likely come to a quick and inglorious end.

It is a situation which has not made things easier for Chancellor Merkel. The FDP's periodic hand-wringing over Germany's outsized role in bailing out struggling euro-zone countries has ccasionally led to speculation that her coalition could collapse prematurely. Furthermore, she has periodically provided some legislative concessions in an attempt to breathe some life into the moribund party.

Mostly, though, it is a situation that seems to indicate that Germany's party landscape no longer has room for the FDP. After all, even the Pirate Party, which focuses almost exclusively on Internet privacy issues, is doing better than the once mighty FDP. The Pirates managed 6 percent in Friday's poll -- numbers that the current FDP could only dream of. 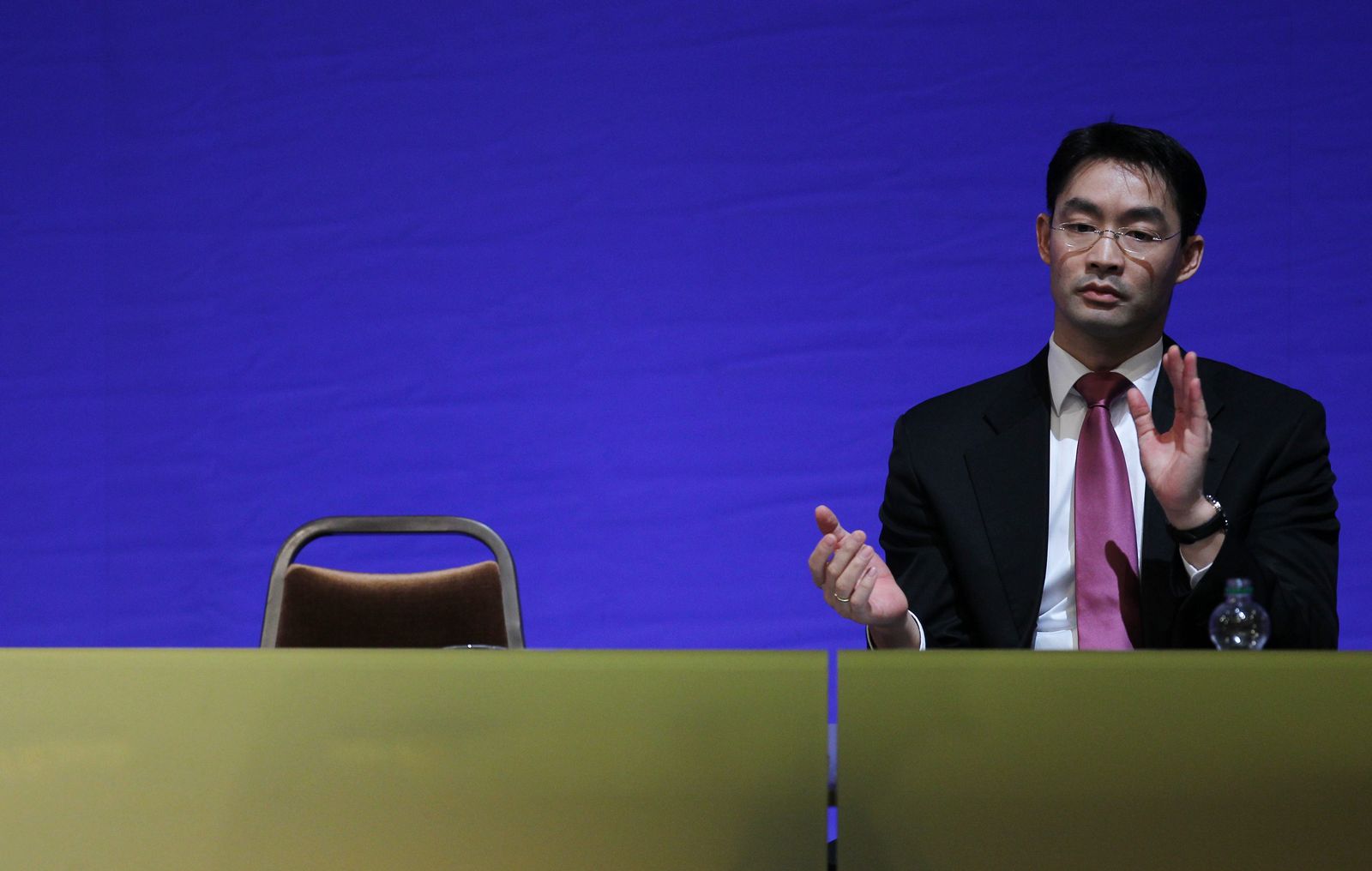 FDP leader Philipp Rösler did not have a good day on Friday.