The statement was short and to the point. On May 10, a day after voters in the state of North Rhine-Westphalia turned away from Chancellor Angela Merkel's Christian Democrats (CDU) in droves, she tersely announced that "tax cuts will not be possible for the foreseeable future." At most, she said, a simplification of Germany's tax code might be achievable.

Merkel's decree came in the wake of the €750 billion European Union package to prop up tottering euro-zone nations and just over a week after a €110 billion EU plan to save Greece from bankruptcy. But the impracticability of tax cuts was a realization that most in Germany had long since come to. As early as January, surveys showed that 58 percent of Germans were against tax cuts with a mere 43 percent in favor. To most the skyrocketing national debt was by far the greater concern.

Still, Merkel's removal of tax relief from her government's to-do list was not universally welcomed. Indeed, even as her own party has suffered mightily in recent opinion polls as the chancellor's European and domestic leadership abilities are questioned, her decision to pull the plug on planned tax cuts sent her junior coalition partner, the pro-business Free Democrats (FDP), already struggling to hit its stride in Berlin, into a tailspin which it has yet to pull out of.

"The state of the party is not good," Justice Minister Sabine Leutheusser-Schnarrenberger, of the FDP, conceded in an interview published in this week's issue of SPIEGEL. "It is about time for us to critically examine our demeanor and our positions."

The speed with which the FDP has hit bottom is nothing short of breathtaking. In general elections last September, the party won 14.6 percent of the vote, the best result ever scored by the party since its founding in postwar Germany in 1948. For decades, the FDP served as the junior coalition partners to the CDU and, occasionally, to the SPD, but it had spent the last 11 years in opposition struggling to make its mark. After is surprising result in September, the party replaced the Social Democrats as Merkel's junior coalition partner and sent five ministers to Berlin, including party head Guido Westerwelle as foreign minister and vice-chancellor.

Now, just eight months later, surveys show that a mere 6 percent of Germans would be prepared to vote for the FDP. Moreover, Westerwelle has had a difficult time positioning his party now that it shares governing responsibility, the FDP has been slow to respond to the new realities presented by the euro crisis and its infighting has spilled into the headlines.

Some of the party's waning fortunes, of course, can be pinned on Merkel. Her government's wavering course in the euro crisis has not endeared her government to the voters. The fact that well over €100 billion of German taxpayer money has had to be ponied up to prop up the euro has likewise not been well received.

But the FDP has made plenty of its own blunders and criticism has been fierce. First in the line of fire has been Westerwelle. Indeed, even Leutheusser-Schnarrenberger, a long-time FDP heavyweight, seemed unwilling to defend him when asked by SPIEGEL if Westerwelle was the right person to lead the party. "He is the elected party head," is all she would say.

A Loud and Combative Style

Few would deny that Westerwelle played a decisive role in the FDP's climb to last fall's pinnacle. His political style can best be described as peripatetic. He is difficult to ignore and has a knack for generating headlines, perhaps most notably during the 2002 campaign when he boarding a garishly colored mobile home, dubbed the "Guido Mobile" and, wearing loud blue and yellow sweaters at every opportunity, toured through the country loudly proclaiming his party's goal to win 18 percent of the vote.

That campaign ultimately proved ineffective, but his party's market liberal message proved attractive to some when frustration at Merkel's centrist political course began building during her first term in office. Many voters switched their allegiance to the FDP.

But his loud and combative campaigning style has not served him well in government. Indeed, one of his very first appearances as foreign minister turned into a public relations disaster when, in response to a question asked in English by a reporter from the BBC, he brusquely replied in German by saying that "just as it is normal that one speaks English in Britain, it is normal that here in Germany, we speak German."

Within Merkel's government, it has often seemed that Westerwelle never really left the campaign trail behind him. He has pushed hard for Merkel to adopt positions his party campaigned on and, as in the case of significant tax cuts he promised on the stump, refused to give up in the face of CDU opposition and a changing political reality. Even as it became clear that Germany's national debt would skyrocket to record levels this year, Westerwelle continued to insist that Germans' tax burden should be significantly reduced.

Indeed, his personality is such that most Germans merely roll their eyes when Guido Westerwelle comes up in conversation. In an oft-forwarded You Tube persiflage, a remake of the song "Die Perfekte Welle" (The Perfect Wave), the refrain goes: "It's Guido Westerwelle, the one that no one likes. Just let him babble on. It's best not to take him seriously !" SPIEGEL columnist Christoph Schweinnicke recently wrote that Westerwelle "is too impetuous, too brash, too impudent, too impatient, too meddlesome, too much of a know-it-all and, paradoxically, too polite and too accommodating. Westerwelle is simply too much."

But beyond Westerwelle's political persona, his party's reintroduction to power in Berlin has been accompanied by shrillness on some issues and wavering on others. Early in the year, for example, the FDP pushed through a reduction of sales tax on hotel stays from the standard VAT rate of 19 percent to the reduced rate of 7 percent, earmarked for necessities. The party was blasted for clientelism as a result -- due to the support it receives from prominent German hoteliers -- and now, some in the party leadership are looking to revoke the reduction.

Similarly, after months of railing against a proposed tax on international financial transactions as a way to penalize banks for their role in the financial crisis, the FDP has now come out in favor of such legislation. And, as the search for a stable governing coalition continues in North Rhine-Westphalia, the FDP now says it could imagine joining a coalition with the center-left Social Democrats and the Greens, despite having ruled out such a grouping just two weeks ago.

Particularly symptomatic, however, of the party's uneasy partnership with Merkel's CDU -- and of Westerwelle's discomfort at having had his domestic policy wings clipped by virtue of being installed as foreign minister -- was the FDP chief's foray into social aid policy in February. Seemingly forgetting that he was a senior government leader, he told the tabloid Bild am Sonntag that "the state could get young welfare recipients to shovel snow and clear the sidewalks. Life can be so practical, but large sectors of our political leadership have forgotten that." He went on to critique welfare benefits paid out by the state.

Wolfgang Bosbach, deputy floor leader for the FDP's coalition partners, the CDU, acidly remarked "Westerwelle's comments were classic opposition posturing. It is unacceptable that the vice chancellor triggers a debate on welfare reform without making a single reform proposal."

Voters, it would appear, tend to agree. When the polling stations closed in North Rhine-Westphalia on May 9, the FDP had accumulated a mere 6.7 percent -- hardly a good showing for a party that had been polling well above 10 percent just months before and in the state from which Westerwelle hails no less. "This is a very disappointing election evening for the Free Democrats," Westerwelle said that night. "It's a warning shot, and it has certainly been heard."

So far, though, the party has not yet figured out what to do about it. 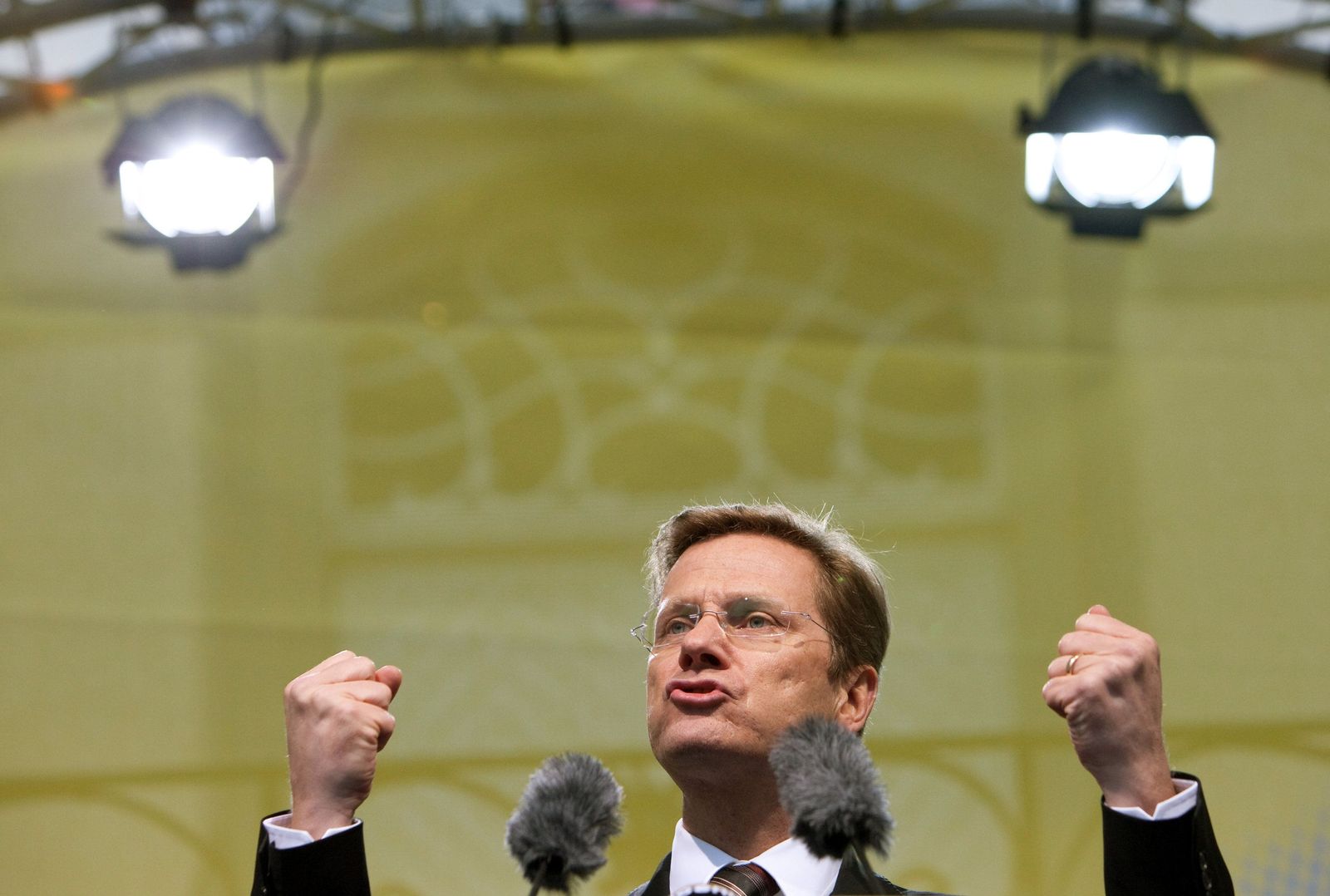 FDP head Guido Westerwelle has had a difficult time striking the right chords now that he is in government.