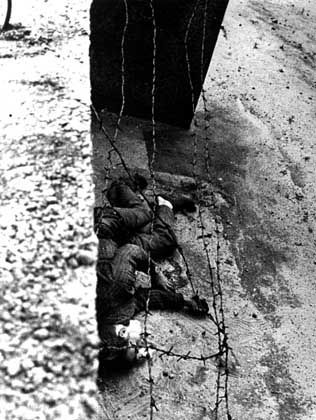 Peter Fechter, an 18-year-old apprentice bricklayer, was shot by East German border guards on August 17, 1962 and left to bleed to death in no-man's-land.

It was always obvious that East Germany's border guards were ordered to shoot at people trying to flee to the West. Had no such order existed, they wouldn't have killed an estimated 1,100 defectors making desperate bids for freedom across the Berlin Wall or the minefields of the 860-mile border between East and West Germany. Most of those victims were shot -- 18-year-old Peter Fechter, for example, who bled to death at the foot of the Wall in August 1962 after guards fired into his back as he tried to escape.

But after the Berlin Wall collapsed in 1989, East Germany's former leaders and top Stasi secret service officials insisted there had been no shoot-to-kill order, and the absence of evidence to the contrary helped many of them to escape prosecution or get away with only lenient sentences in a series of trials.

Now, coinciding with the 46th anniversary of the start of construction of the Berlin Wall on August 13, 1961, a seven-page document has surfaced in an archive of Stasi files that contains an explicit firing order. It was issued to a special team of Stasi agents tasked with infiltrating regular units of border guards to prevent their colleagues from defecting.

"It is your duty to use your combat  skills in such a way as to overcome the cunning of the border breacher, to challenge or liquidate him in order to thwart the planned border breach," says the order dated October 1, 1973. Dont hesitate to use your weapon even when border breaches happen with women and children, which traitors have often exploited in the past.

The document was found in an archive in Magdeburg west of Berlin, in the personnel file of a Stasi agent named only as Manfred L. who had signed the document to confirm he had read and acknowledged it.

The find has made front-page news in the German media in recent days and has led to calls for fresh prosecutions of former East German officials, even though it has since emerged that the order had already been discovered, and published in a history book, in 1997.

Regardless of whether it is new or not, historians see the order as a reminder of how ruthless the East German regime was, and of how much work still needs to be done to shed light on the workings of Germany's 40-year communist dictatorship.

"For me this is proof that there always was a firing order at the border," Günter Nooke, human rights adviser to the German government, told the ZDF television channel. The German Democratic Republic was ruled by people who had issued orders to shoot at women and children, he said. "Today that would count as crimes against humanity, that's a case for the International Criminal Court in The Hague."

"The people of the Stasi and the Communist Party officials who deny this firing order today, they do so just like any rotten criminal would," said Nooke. "As long as no documents could be found, they tried to create the impression that it wasn't like that."

Marianne Birthler, head of the government's authority which manages the Stasi files, said: "This discovery is important because to this day officials kept denying that there was a firing order at the Berlin Wall, and we havent come across an instruction as explicit, clear and unlimited as this one.

Written orders instructing border guards to open fire as a last resort have been found before in East German files, but those orders always added that guards had to shout warnings or fire warning shots first.

There is no reference to such warnings in the seven-page order now uncovered. This shows that the history of East Germany has yet to be fully researched, said Andreas Schulze, spokesman for the Birthler Authority.

It's unclear whether the discovery will lead to a re-opening of past cases, or if there'll be a criminal investigation into who issued the October 1973 order, and whether it led to any actual killings. A total of 37 border guards were themselves killed trying to escape across the frontier between 1961 and 1989, and that figure is believed to be higher.

The public prosecutor's office in Magdeburg, where the file was discovered, said it would check whether the find warranted an investigation.

"Evidently we need such discoveries now and again to help people remember," said historian Hubertus Knabe, director of the Stasi prison museum in the Berlin district of Hohenschönhausen.

Meanwhile East Germany's last leader Egon Krenz, who served just over three years of a 6 sentence for the manslaughter of defectors who died trying to escape over the Wall, again denied that there was a firing order. "There was no kill order or firing order as you call it," Krenz told Bild newspaper. "I know that, not from files but from my own experience. Such an order would have been in breach of the law of the GDR."

Paradoxically, such abject cynicism, expressed on page 2 of Germany's best-selling newspaper, should be welcomed.

Evidence of the regime that killed defectors, locked up dissidents and hired hundreds of thousands of "informal" spies to snoop on their neighbors and colleagues is disappearing fast.

Most tourists search in vain for the Wall, only a few short and crumbling stretches of which remain intact. The 160-kilometer barrier that fenced in West Berlin for 28 years has been turned into a cycle path, and in many places dream homes have sprouted in the former "death strip" in front of the Wall, a no-man's land designed to give soldiers a clear shot at escapers.

Movies like "Goodbye, Lenin!" and "Sonnenallee" have given a rose-tinted view of what life was like in East Germany, and high unemployment in eastern Germany since unification has led many to look back wistfully at an era when everybody had a job. A new hotel in Berlin offers visitors an "East German" experience with authentic GDR furniture and toilet paper, and is proving popular.

Werner Schulze, a former civil rights activist in the GDR, said there was sense that "things hadn't been so bad in the GDR," and that today's Left Party, which emerged from the former communist party that ruled East Germany, has been exploiting that feeling. "It's far too soon to draw a line under what happened," he told Hannover Neue Presse.

"In Italy they're still punishing people who were responsible for executions at the end of World war Two," said Schulze. "And the shooting of defectors at the Wall was nothing other than execution."