Germany's Foreign Minister Guido Westerwelle's job is, for now, safe. His party, the Free Democrats, junior coalition partner in Chancellor Angela Merkel's government, has decided not to force him out of the cabinet.

Given the widespread critique of Westerwelle for his recent insistence that German sanctions played an important role in the toppling of Libyan strongman Moammar Gadhafi -- some of the sharpest having come from within the FDP -- his momentary political survival must come as a welcome respite.

It may also make his boss envious. It is, after all, the kind of reprieve which German Chancellor Angela Merkel will not have the luxury of enjoying any time soon. While Westerwelle is mired in mixed-messages about Libya, Merkel is up to her eyes in the euro crisis. And in Berlin, that crisis has reached a new phase recently.

Until now, the question had been primarily that of saving the common currency from collapse. Now, however, it looks as though Merkel's own political survival is increasingly tied to those efforts. Germans are becoming more and more tired of seeing their government pledge tens of billions of euros to assist heavily indebted members of the euro zone. And parliamentarians, particularly among Merkel's conservatives, have been listening. Should Merkel not be able to push through revisions to the European Financial Stability Facility (EFSF) -- agreed to at a European Union summit meeting in July -- through German parliament, her government, say Chancellery sources, could collapse.

Has Germany Lost Its Compass?

Many in recent days have posited a connection between the two crises being faced by Westerwelle and Merkel. Both, say critics, show that Germany has lost its orientation under Merkel's leadership: No longer does the country seek to deeply root itself within the European Union as it has since World War II, and no longer does it unconditionally stand at the side of its Western allies. A series of German elder statesmen, from former Chancellor Helmut Kohl to ex-Foreign Minister Joschka Fischer, have come out in recent weeks to complain about the direction Merkel is taking the country.

Merkel, though, lately has more to worry about from dissenters among current parliamentary conservatives than from past German leaders. The EU summit in July agreed to outfit the EFSF with far-reaching new mechanisms for intervention should euro-zone countries run into debt difficulties and to increase its lending power to €440 billion. The German cabinet signed off on the changes on Wednesday.

But the ongoing debate surrounding the reform is telling. Many conservatives were concerned that the changes would effectively reduce the German parliament's ability to influence future payouts -- a problem, they say, because the lion's share of any bailout bill will be paid by Germany.

Furthermore, the Christian Social Union, the Bavarian sister party to Merkel's Christian Democrats, has made it clear that it is opposed to any moves toward further European integration of the kind many say are necessary to put an end to the euro crisis. In addition, the CSU has said it wants there to be a process whereby indebted euro-zone members and those countries which chronically violated EU budget deficit rules can be excluded from the currency union.

"If a member state isn't able to fulfil the convergence criteria in the long term, then there should be a possibility for that country to leave the euro zone," reads an internal CSU paper on the euro crisis. It is, in essence, a demand that Greece leave the currency union -- and a declaration of war on Chancellor Merkel.

According to some estimates, as many as two dozen parliamentarians from within Merkel's coalition are considering rejecting the EFSF changes when the Bundestag votes at the end of September.

That would be enough to deprive Merkel of her own parliamentary majority, which would be seen as a potentially fatal blow to her authority. Her coalition has 330 seats in the 620-seat parliament, which means she cannot afford more than 19 rebels.

Given the weightiness of the decision at hand, the CDU leadership is taking the possibility of a rebellion seriously. Senior CDU parliamentarians are making the rounds to make clear to conservative parliamentarians what the consequences of a no vote would be. And Berlin has come up with a compromise which might satisfy at least some of the skeptics -- that of providing the Bundestag with a veto over the most significant decisions made by the EFSF, for example. Other EFSF decisions would be closely watched by a committee within German parliament.

Even should the bill ultimately pass -- the parliamentary vote is currently scheduled for Sept. 29 -- the ongoing debt crisis in the euro zone isn't likely to disappear any time soon. And neither is the skepticism. Further measures that may become necessary to prop up the common currency, it seems safe to assume, will further erode Merkel's power base.

Many would say that the chancellor has only herself to blame. She has done a poor job of explaining to the German populace just how vital propping up the euro is for German economic interests. She has also played the spoiler on the European stage, standing in the way of several more ambitious proposals aimed at providing lasting stability for the European common currency.

If her strategy was that of pandering to German taxpayers, it may have backfired. Indeed, Merkel herself seems to have recognized the dangerous growth of EU antipathy in Germany recently -- and that she herself may be partially to blame.

After months of foot-dragging during which it seemed as though Merkel had lost all passion for the European Union and the common currency, the chancellor now seems to be slowly changing her tune. She recently emphasized in an interview that the project of European unity fills her with "reverence and humility." On her visit to Serbia last week, she told Serbian President Boris Tadic that "Europe is the solution."

In an interview with the Sunday tabloid Bild am Sonntag, Merkel also insisted that her government was acting in the long tradition of Christian Democratic governments which came before. "What always unifies us is the same as during the time of Helmut Kohl and Konrad Adenauer: the Christian view of humanity and values such as freedom, justice and solidarity." It was a clear response to recent comments by Kohl that Germany had lost direction and that he wondered "where Germany stands today and where it is heading."

Such stentorian sentiments will likely be enough to help convince conservative lawmakers of the necessity of passing the EFSF reform. But whether German voters will be convinced remains to be seen. Any further indication that the Merkel government is unable to stop the euro-zone bleeding on Europe's southern shores is unlikely to do much for the CDU's already sagging poll numbers.

In other words, even if Merkel succeeds in forestalling a conservative revolt at the end of September, the political tightrope she is walking will get no wider. And the temptation for her to position Germany at odds with the interests of the European Union as a whole will only grow. 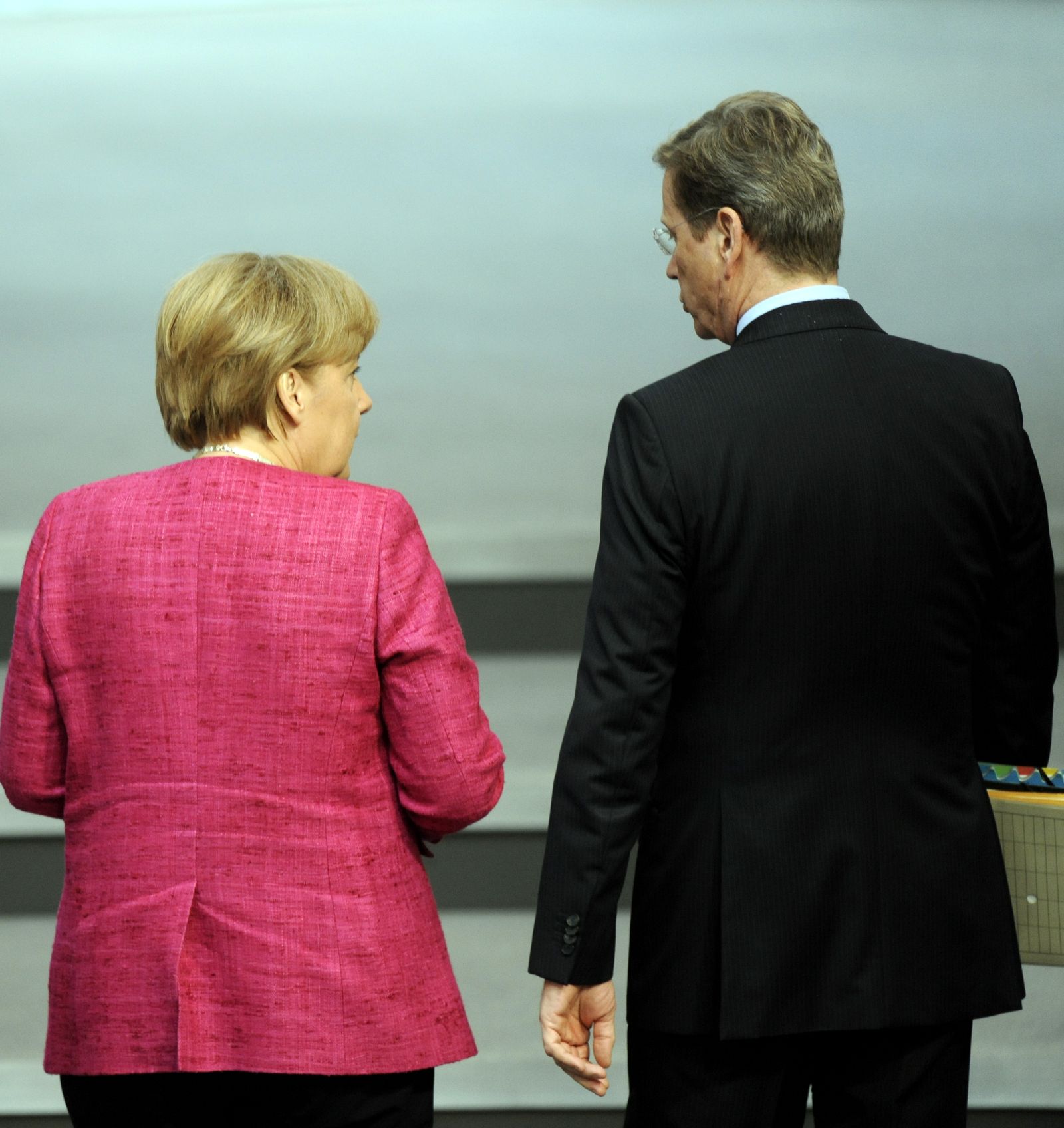 Both Chancellor Merkel and Foreign Minister Guido Westerwelle have been heavily criticized in recent weeks.