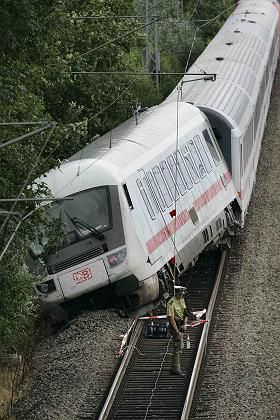 Off the rails: The road to privatization has made German trains less efficient.

The cliché that German trains always run on time is no longer true. Their reputation has been eroded, at least among German passengers, by a creeping increase in delays in recent years as national operator Deutsche Bahn sheds staff, rolling stock and equipment to shape up its accounts for privatization.

The deterioration is obvious to anyone who regularly travels on German trains, and one of the country's main passenger lobbies, Pro Bahn, regularly complains about it.

German rail services remain good overall -- the sleek red-and-white ICE high-speed inter-city trains are generally reliable, despite the delays -- and standards have a long way to slip before they reach the British experience of the 1980s and 1990s, when train cancellations, collapsing seats, blocked lavatories, general filth and ludicrous excuses (like "the wrong kind of snow" or "leaves on the line") were routine.

But German train users fear that the sale of parts of the business to private investors starting next year, under a plan agreed by Chancellor Angela Merkel's government on Tuesday, will result in more delays -- and the closure of less profitable regional routes.

"We expect a further deterioration," said Joachim Kemnitz, spokesman for passengers group Pro Bahn, to SPIEGEL ONLINE. "Deutsche Bahn has been scaling down the reserves it has had as a state-owned company because it wants to get ready for privatization."

He added that, "Staff, replacement trains and track switches are now missing so that when something goes wrong, it has an immediate impact on service." For example, surplus track switches have been ripped up to save costs in recent years. That means that when one switch fails, there is often no alternative route for trains to be redirected to, said Kemnitz.

Nevertheless, Deutsche Bahn's financial results and its global expansion are likely to whet investors' appetites. Last year its operating profit jumped 80 percent to €2.5 billion, on revenue up 8 percent at €26.9 billion. Its workforce at the end of last year was 229,200, down 50,000 from 10 years ago. 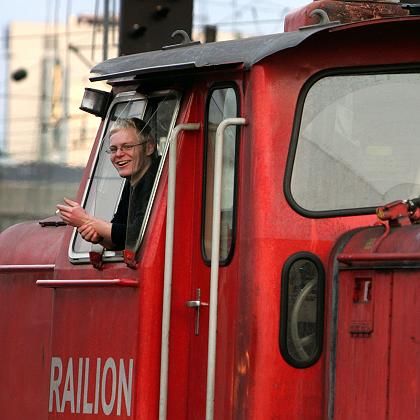 German locomotive drivers, among other Deutsche Bahn employees, mounted a strike in early July to win better salaries in the wake of impressive profits.

Deutsche Bahn's tireless chief executive, Hartmut Mehdorn, has promoted the group as a "global player" since its acquisition in 2002 of logistics firm Schenker, one of a series of takeovers of air and sea freight companies that has turned the rail company into the world's second-largest logistics group -- after Deutsche Post, the German mail service, which has also been partly-privatized.

Mehdorn plans further acquisitions and is working on a range of international projects, including a venture with Russian and Chinese railways to carry freight across Siberia from China to Europe.

Deutsche Bahn will be the last of Germany's big state-owned companies to be privatized. The sale should generate several billion euros for government coffers.

The wheels of change turn slowly in Germany: Deutsche Bahn was converted to a joint-stock company 14 years ago to prepare it for a sell-off. The venture was delayed partly because of Britain's chaotic rail privatization in the 1990s. British Rail was broken into more than 100 separate companies, including 25 passenger train operators. The resulting confusion over fares and timetables caused an initial downturn in what had already been a notoriously poor service -- and spooked some German politicians.

There was public uproar in Britain over "fat cat" payouts for railway managers, and Railtrack, the company in charge of the infrastructure, nearly went broke and had to be shored up by the government.

Germany has been anxious to avoid making the same mistakes and has decided to keep Deutsche Bahn intact as the dominant rail operator.

Tuesday's cabinet decision sets in motion draft legislation to sell up to 49 percent of the railway. The government will always retain a majority stake in the company because the German constitution requires it to guarantee the maintenance of the track network.

Transport Minister Wolfgang Tiefensee said a stake of up to 25 percent will be floated on the stock market by the end of 2008 at the latest. The 34,000 kilometers of track will be placed under Deutsche Bahn's control for at least 15 years, although it will formally remain government property and will receive annual subsidies of up to €2.5 billion to help pay for repairs and maintenance.

"The track network will remain government property. No investor will get access to even one kilometer of track," Tiefensee told a news conference in an attempt to allay fears of a sell-off to unscrupulous investors. "The government will always retain a majority of the shares. The group will remain integrated with its operations and network."

However, the government's plans may themselves face some serious delays. There is growing opposition to the sell-off plan from some of the country's 16 federal states which have a say in the legislation because they make up the Bundesrat, or upper house of parliament.

Several state governments agree with Pro Bahn that passenger services could suffer in a partially privatized railway. They think Deutsche Bahn's focus on the lucrative freight market has already led it to neglect passenger services and believe the trend could be reinforced when profit-focused private investors get involved.

Thilo Sarrazin, the finance minister of the state of Berlin said: "The state is engaging in a very bad business deal with the privatization in its current form." He said the railway with all its track and infrastructure was worth around €125 to €150 billion. Selling off half of that for a projected sum of €3 to €6 billion would amount to "throwing away state assets," he told Volksstimme newspaper.

Sarrazin said the government should keep control of the track and the railway should sell off its various subsidiaries one by one. Pro Bahn's Kemnitz said Deutsche Bahn was likely to cut back the track network to maximize profits while it pocketed the annual maintenance subsidies.

Meanwhile, opposition politicians from the Greens and business-friendly Free Democrats say the privatization won't boost competition if Deutsche Bahn is allowed to keep control of the track.

The privatization law is likely to pass the lower house this autumn, but could face problems in the upper house. And even assuming the sell-off gets full parliamentary approval, there are further obstacles on the track -- namely President Horst Köhler, who refused to sign a law on the privatization of Germany's air traffic control system; not to mention the Federal Constitutional Court, which may also be called on to give the deal close scrutiny.