Thursday marks the 25th anniversary of Germany's Green Party entering the German parliament, the Bundestag. The party has come a long way since those heady early days. At the time, the Greens consisted largely of bearded, sweater-wearing tree-huggers and pacifists. Their best-known member, former street fighter and taxi driver Joschka Fischer, who would later become Germany's foreign minister, famously turned up for his swearing-in as Hesse's environment minister in 1985 wearing sneakers.

How things have changed. Now the former bastion of eco-malcontents is on the verge of entering into a coalition with their former class enemies, the conservative Christian Democratic Union (CDU), in the city-state of Hamburg after Feb. 24 elections failed to produce a clear winner or obvious coalition. After seven hours of exploratory talks on Wednesday, the two parties announced they had discovered "much common ground." Hamburg's incumbent mayor, the CDU's Ole von Beust, has made no secret of the fact that the Greens are his preferred coalition partners.

If the courtship is consummated, then it will mark a historic turning point in German politics. Suddenly the coalition game would be wide open -- instead of the traditional pairings of the center-left Social Democratic Party (SPD) with the Greens and the CDU with the business-friendly Free Democratic Party (FDP), anything would be possible. A new era of political promiscuity would be ushered in.

A CDU-Greens coalition would be seen as setting a precedent for similar alliances elsewhere, including on the national level. For both the Greens and the CDU, it would give them much-needed room for maneuver in forming coalitions and free them from the traditional alliances that are proving increasingly inadequate for the realities of Germany's current political landscape.

The reason for the parties' newfound willingness to consider partner-swapping is simple: the rise of the far-left Left Party. The new kid on the bloc, which brings together the Party of Democratic Socialism -- the successor to East Germany's SED Communist Party -- with western German leftists, has muscled in on Germany's cozy old four-party system and is unceremoniously carving out elbow room for itself.

In several recent elections, the Left Party has won a big enough share of the vote that neither of the two traditional German coalitions have been able to produce a majority. In the 2005 national election, the leftists were responsible for forcing Germany's two largest parties, the SPD and CDU, into a so-called "grand coalition" which has been a source of frustration to both partners ever since.

In an op-ed for the newspaper Süddeutsche Zeitung published Thursday, former German President Roman Herzog warned that forming a government was becoming increasingly difficult in Germany under the new five-party system. "We are facing a fundamental change in our system of government," he wrote.

Time for a Change

Hence the cross-party search for new coalition options. For Hamburg Mayor Beust, the Greens are attractive because they would form a junior partner in the coalition and leave him with the lion's share of the power.

With the FDP having failed to pass the 5-percent hurdle needed to get into the Hamburg state parliament, Beust's only other realistic alternative would be a grand coalition with the SPD. That's looking increasing unlikely, especially as CDU leader Angela Merkel has given Beust a free hand to enter into talks with the Greens.

And a CDU-Greens link-up would not be entirely without precedent. The parties have formed workable coalitions in local government before -- including in major cities, such as Essen and Frankfurt -- albeit never on the state level. (Although it is a city, Hamburg has the status of being one of the country's 16 states.)

The Greens themselves differ as to the significance of a possible coalition with the CDU in Hamburg. Senior Greens politician and former German environment minister Jürgen Tritten, who belongs to the Greens' left wing, says that the Hamburg coalition would be "a stopgap measure, not a strategic option." The Greens' co-floor leader in the federal parliament, Renate Künast, herself a centrist, disagrees -- for her, such a coalition would have significance "far beyond Hamburg."

An Identity Crisis for the Greens 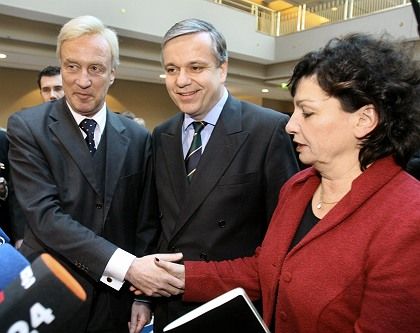 For the CDU, one reason the new coalition option is attractive is because it increases the pressure on the SPD to get into bed with the Left Party. The SPD had previously considered working together to be taboo because of the Left Party's links to the former East German government and the fact that it was created by Oskar Lafontaine, a former SPD chairman who bolted and took disaffected left-wing members of the party with him. But that has changed in recent days, and the CDU is keen to exploit tension brewing within the SPD, which Chancellor Angela Merkel this week called a " deeply divided party."

SPD leader Kurt Beck's recent decision to drop his opposition to cooperating with the Left Party -- for example, in the state of Hesse -- is currently causing a deep rift within the SPD, which looks set to cause lasting damage to the party. According to a opinion poll published Thursday, the SPD's leftward shift is causing it to lose support in the middle -- it has lost four percentage points on the national level since last week and is now at only 24 percent, a new low.

The Hamburg model also raises the prospect of a three-way alliance between the Greens, CDU and FDP. Such a tie-up, dubbed the "Jamaica" coalition after the colors of the Jamaican flag (black and yellow representing the CDU and FDP respectively), could prove a winner at the national level. The Jamaica coalition was mooted after the indecisive 2005 election, but was quashed by the Greens. But that option might suddenly look a lot more attractive to the Greens at the next federal election in 2009, after four years in opposition.

A Marriage of Opera Lovers

Despite the pragmatic advantages of a CDU-Greens alliance, the prospect of entering into a coalition with their former class enemies is causing plenty of soul-searching for the Greens. Although there is a degree of common ground between the two parties -- for example, in certain economic, ethical and environmental policies and in their appeal to the better-off (one newspaper has dubbed a CDU-Greens alliance the "opera lovers' coalition") -- they still differ substantially on many issues.

In Hamburg, the parties are split on several major issues, including a proposal to deepen the Elbe River so that Germany's biggest port is ready for a new generation of container ships and the planned construction of a new coal-fired power station that would be the largest of its kind in the country. The Greens oppose both projects on environmental grounds.

But the Greens' options are limited. The party is currently undergoing something of an identity crisis. Rather than occupying a certain swathe of the political spectrum, the Greens are an issues-based party. As such, they are a broad church, making their profile diffuse and vulnerable to erosion from other parties in the increasingly crowded political landscape.

And their problems are manifold. The party has suffered a loss of confidence after going into opposition in 2005 following the glory years in government under their standard-bearer Joschka Fischer, Germany's most popular politician at the time. Meanwhile the environmental moral high ground has been invaded by Angela Merkel, who has positioned herself as the "green chancellor." And the party's left-wingers, disenchanted by realpolitik decisions by the Greens while in government with the SPD, such as to support the NATO bombing of Kosovo in 1999, have been defecting in droves to the booming Left Party.

Hamburg Green Party politician Christiane Blömeke warns of a "step into insignificance" if the Greens choose opposition over a link-up with the CDU in Hamburg. The message seems to have gotten through -- the decision to enter into exploratory talks with the CDU received overwhelming support at a Hamburg Green Party meeting last week.

However, the Greens are taking a big risk if they leap into bed with the conservatives too quickly. There are warnings that many party members will jump ship if the Greens enter into coalition negotiations with the CDU without extracting significant concessions in advance. The Greens may learn to their cost that infidelity can carry a high price.