The Ferris wheel on Alexanderplatz has come to a standstill and the mulled wine stands are boarded up. The sphere at the top of the TV tower is hidden in the clouds. On the day after the truck attack in the western part of the city, almost all of Berlin's 60 Christmas markets are closed, including the one at Alexanderplatz. "Out of sympathy and reverence," says Rudi Bergmann, before quickly adding: "But not out of fear!"

Bergmann has been bringing his Grillhütte stand from Nuremberg to Berlin for the last 20 years, for about a month each time. On this Tuesday, however, his grill is empty. Officials at the Rotes Rathaus, Berlin's city hall, requested that the Christmas markets be closed for at least a day. Of course, says Bergmann, "you always think it might happen, but then you ignore those thoughts," he says. Over all those years.

And now? Bergmann shrugs his shoulders. What do you do? Keep on going. Live. Reopen the Grillhütte tomorrow. Because you can't just hide out of fear. "Doesn't do any good," says a woman passing by. "You have to keep going."

This was the mood in the German capital one day after the attack. Shaken but calm. Berlin has seen a lot in its day. And not only politicians and officials, but also city residents knew that there would eventually be an attack in Berlin.

When the chancellor stepped in front of the cameras in the morning to say what a "difficult day" it had been, she ended her statement with these words: "We don't want to live a life in which fear of evil paralyzes us."

Our impression, after a foray through the capital, is that Berliners are not paralyzed in the least.

Passersby have left flowers and candles on Breitscheidplatz, the scene of the attack. About two dozen people are standing there, weeping, praying and showing their respect. You can still see the swath of destruction the truck cut through the Christmas market, and the wrecked huts. It is quiet, and it is incredibly sad.

Merkel is about to arrive, to visit the scene of the attack and lay down flowers, and sign her name in the condolence book at the Kaiser Wilhelm Memorial Church, most of it destroyed in the last war. A small number of people will express their displeasure with her, including the far right, with their usual accusation that "it was all her fault."

But the majority of Berliners are like the Borghorsts. They have lived in the Charlottenburg neighborhood, just around the corner from the Memorial Church, for more than 50 years. On Monday, says Helga Borghorst, she thought about stopping at the Christmas market on her way home, but decided to go straight home instead. It was around 8 p.m., the same time as the attack.

She is worried, the 78-year-old says, "that this will be exploited politically, and that all refugees will be lumped together." There was nothing but shock on the evening of the attack, says her husband Hermann. But now, a day later, "reason takes over." People are reacting "calmly and soberly," he says, because Berlin is the "city of freedom and sticking together; it's a tradition for us." As a longtime Berliner, he says he refuses to allow his home town to be destroyed. Never.

Where Americans come together after disasters and acts of terror, and the French invoke the Republican pride by singing the "Marseillaise" louder than usual, Berliners apparently react the say they always react when something is going on: They are completely unimpressed.

'Everything Is as Quiet as Usual'

The greatest amount of turmoil is currently occurring at the former Tempelhof Airport, Berlin's largest refugee accommodation, where Naved B., who was detained and later released, reportedly lived and where 250 members of the SEK special police forces were deployed at 3 a.m.

There are two entrances. At one of them, a security guard sits in front of a Christmas tree and says, lying: "Everything is as quiet as usual." At the other entrance, reporters mob anyone who comes or goes. An Italian TV journalist asks: "Is this really a refugee shelter?"

A young Afghan, wearing a bomber jacket and a sidecut, says he was sleeping so soundly that he didn't even notice the police raid. We show a photo of Naved B. to a short, thin Pakistani in yellow jeans. He only speaks Urdu, but he immediately points at Hangar 6, to indicate that the suspect lives there. An interpreter explains that the man saw Naved B. there yesterday. Several refugees say they recognize B., but no one can say anything more than that he is a Pakistani.

A Berliner who has been working as an interpreter in the hangar for a few weeks is plagued by a "sick feeling" today, over the kinds of people he may have interacted with inside. He is afraid, he says, that something could happen in the shelter, where the mood is already bad enough. At 1:30 p.m., the reports arrive that the suspect is apparently not the perpetrator, after all. Many reporters reach for their phones and then leave. "Where should I go now?" a British reporter asks, looking a little forlorn.

A few blocks away, Stephan Linsner is sitting in his favorite bar and says: "This is where we live." This is Manfred von Richthofen Street in the middle-class Tempelhof neighborhood, where you can see the airport hangar. "It feels a little unsettling when they do searches, and now they say it wasn't even him." Linsner shrugs his shoulders. The notion that the real perpetrator could still be at large in Berlin doesn't fluster him.

His dish of Manti, or Turkish dumplings, is getting cold, but Linsner, who runs a communications agency, wants to make his point. He certainly feels anxious, he says, but he isn't afraid. Besides, he says, he isn't going to Christmas markets this year, because an attack "was on the agenda." Still, there is one question that has troubled him since Monday evening: "Why did the United States issue a warning to its citizens not to go the German Christmas markets, but we didn't tell our citizens the same thing?"

It's 3:30 in the afternoon at Checkpoint Charlie, and it's already getting dark. Everything seems normal at this tourist hotspot, where Chinese and Italians stand in line to pose for a photo with an actor in a US military uniform. Tourists walk across the street. A driver honks his horn. A woman poses with her daughter and son in front of the sign identifying the American sector. What does it feel like to be on vacation in Berlin today, after the attack?

"Very strange," says Anna Puggioni, "because we come from Nice." Her daughter Giulia quickly adds: "Now we've experienced it two times." She is talking about the truck attack in Nice last summer, in which more than 80 people died. Then her mother says: "And on Sunday evening, we were at the same Christmas market that was now attacked."

Puggioni, the Italian from France, says that for two or three months after the terrorist attack in her city, she did everything to avoid going to the Promenade des Anglais, the scene of the attack. That phase is now over, she says. "Life goes on."

But she also has a question: "Your city seems very quiet. Is Berlin always like this?" 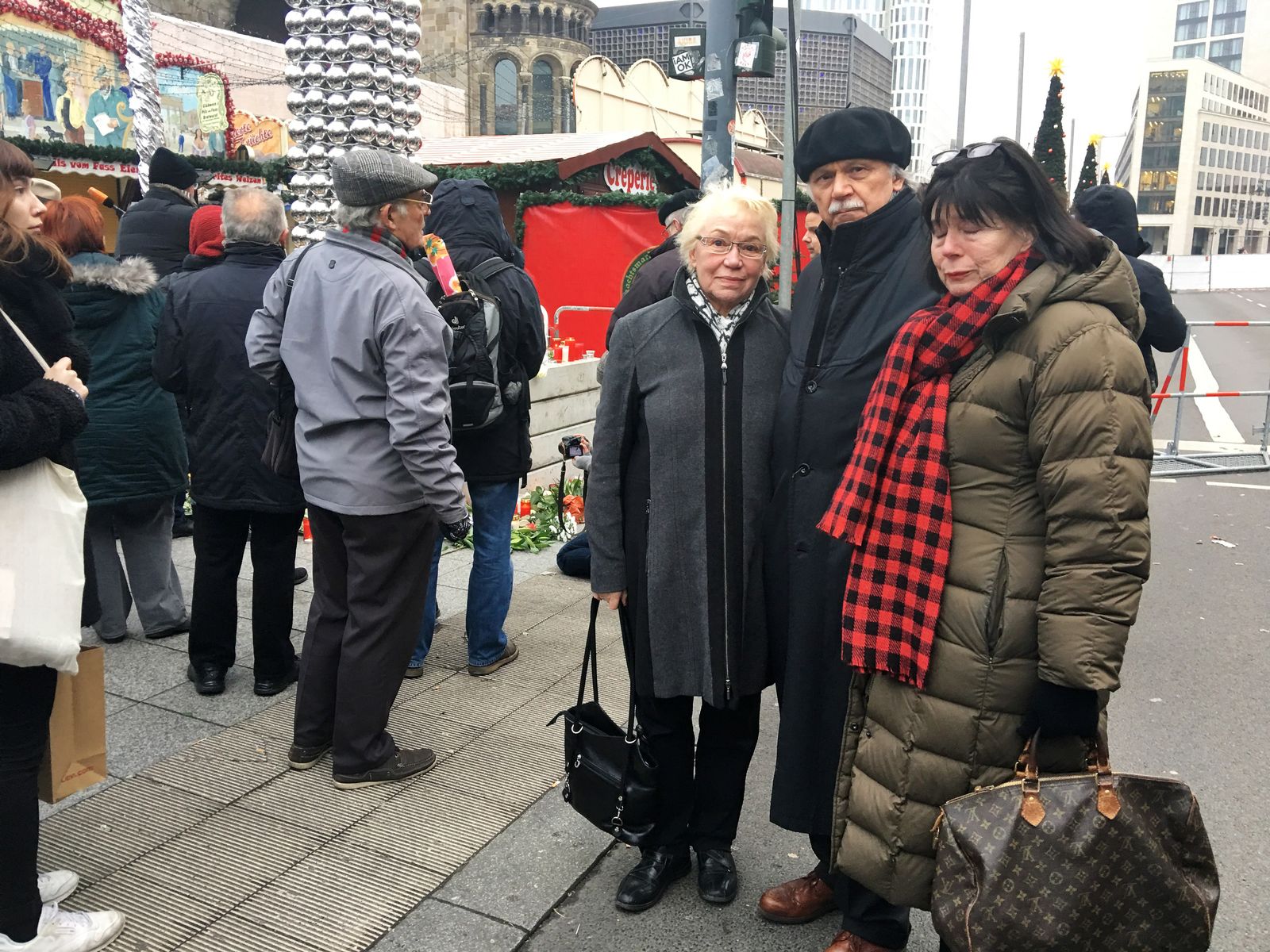 Helga und Hermann Borghorst with a friend at the make-shift memorial set up at the Christmas market where the attack happened. 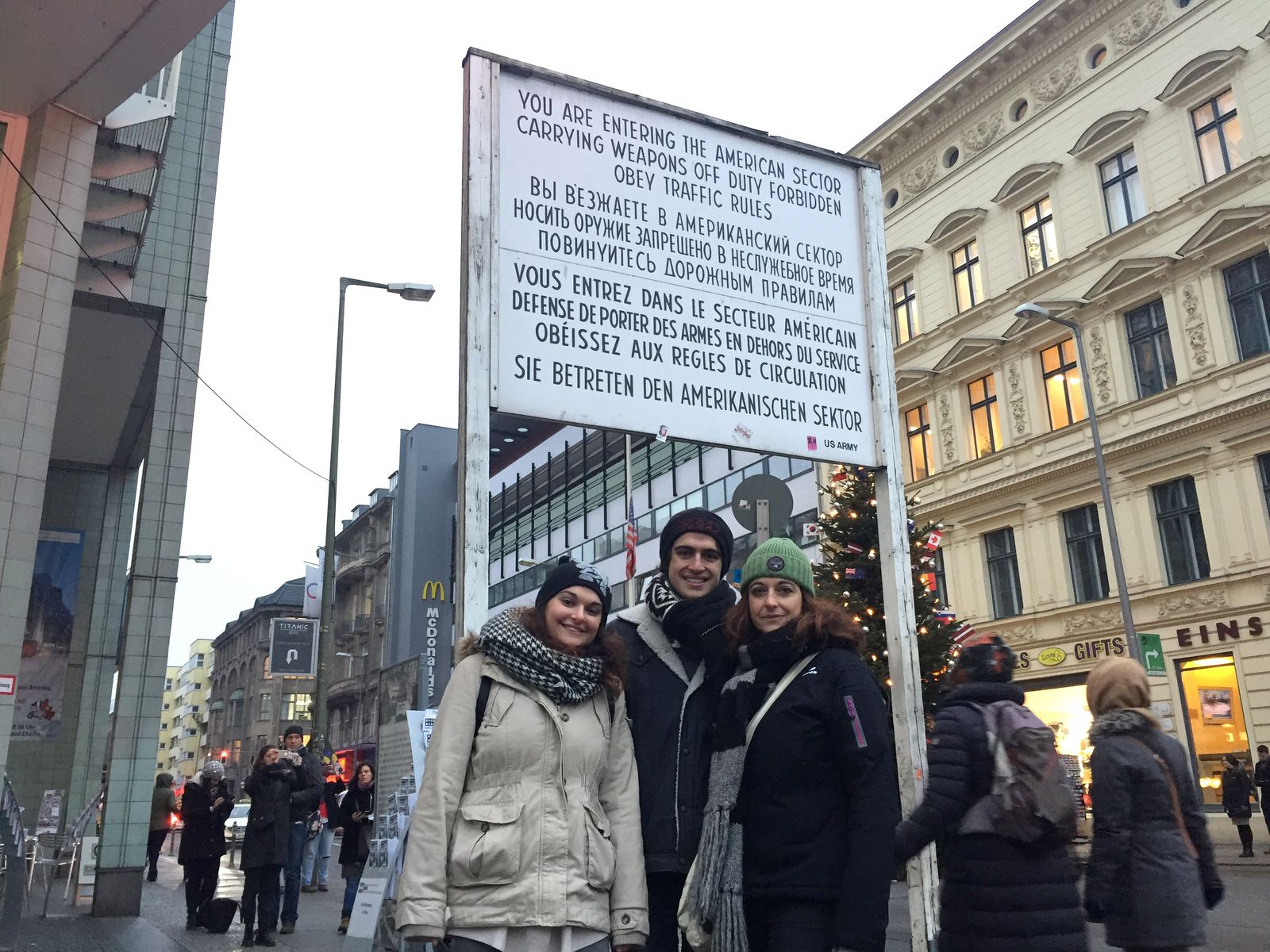 Anna Puggioni with her daughter and her son at Checkpoint Charlie