Next year marks two decades since the crumbling of the Berlin Wall -- and the landmark date will not pass unnoticed by the Berlin International Film Festival. A series entitled "After Winter Comes Spring" will showcase a series of feature films and documentaries created during the last decade of the Cold War. 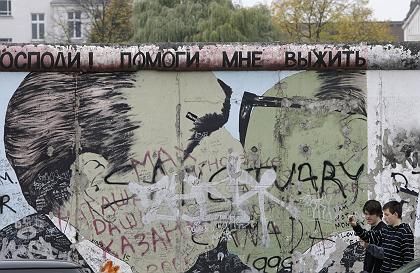 It will be 20 years since the fall of the Berlin Wall on November 9, 2009, and next year's Berlin International Film Festival will screen a series of Cold War-era movies.

During the Cold War, the 59-year-old Berlinale festival found an audience for Eastern European filmmakers trying to present their ideas without censorship. And this history will be dusted off in this year's gathering of international film stars, makers and fans.

"The works formulate the hope of a political or economic opening and, above all, artistic freedom," festival organizers said. "They pushed boundaries in both form and content, while boldly articulating the need for reform."

The series, which takes its name from an award-winning 1988 documentary by Germany's Helke Misselwitz, will show films from both the official studios across Eastern Europe and the creative underground.

One of the leading films to be screened is by Polish director Krzysztof Kieslowski with his dark take on the Fifth Commandment, "Krótki film o zabijaniu," (A Short Film about Killing) filmed in 1987. Rashid Nugmanov's "Igla," (The Needle), a Soviet cult film made a year before the fall of the Wall will also be shown.

Some films will be shown in Germany for the first time, like Piotr Szulkin's "Wojna wiatów - nastpne stulecie" (The War of the Worlds - Next Century), a science-fiction tale of day-by-day life during a dictatorship -- which was initially banned by the censors.

Berlinale, which runs from 5 to 15 February, is one of the world's top three film festivals alongside Cannes and Venice. But whereas the others, especially Cannes, are synonymous with big names and glamour, Berlin has also established a reputation away from the red carpet. It is known for including politics, history and gritty realism among its annual picks.

And its keen sense of history has been reflected in its venues. The Berlinale cinemas include gems like the communist-era Kino International Cinema and the art-deco-styled Delphi Film Palace.

But this year it has a new coup. Top films will be shown in the Friedrichstadtpalast, a cavernous music hall which was at the heart of Berlin's roaring twenties. Europe's largest cabaret theater -- where Marlene Dietrich made her debut -- will be transformed into a "film palace" for the duration of the festival seating more than 1,700 viewers.