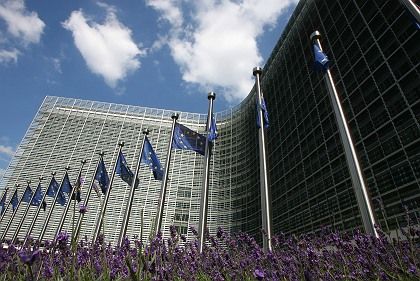 A view of the Berlaymont building, the Brussels headquarters of the European Commission. Germany's highest court is currently probing the constitutionality of the Lisbon Treaty.

Last Tuesday, the judges at Germany's highest court learned just how difficult it is to have the last word in Europe. The Federal Constitutional Court in the southwestern city of Karlsruhe had hardly begun its hearing on the Lisbon Treaty when a higher power -- the European Court of Justice -- intervened. The Luxembourg-based rival court's demonstration that there are no limits to the Eurocrats' claim to power -- was spread by whispers through the German courtroom.

The European judges had just given their blessing to the enactment of an EU guideline. It relates to new data storage rules, which now require that telecommunications companies throughout Europe keep telephone and Internet usage data on file for six months to make it available for criminal prosecutions. The question was: Does such a far-reaching measure need to be approved by all member states for it to come into effect?

The answer from Luxembourg was no. The court's reasoning seemed bizarre. The judges argued that the issue of data storage is less pertinent to fighting terrorism than to the European single market. And a simple majority -- rather than the unanimous vote which would have been required if the measure had fallen under the EU's crime and judicial affairs pillar -- is sufficient to rule on questions relating to the single market.

It's a cunning line of argumentation which effectively allows the court to intervene in many different political spheres within member countries.

The Karlsruhe judges were visibly indignant when discussing precautions designed to impose limits on such trickery in the future. It's true that, after the end of the hearings, the indications were that the court will not declare the Lisbon Treaty unconstitutional. But the German constitutional judges will probably call for significant changes to German parliamentary law so that the reform treaty can come into force.

The treaty, with its jumble of confusing clauses and cross-references, contains new, sweeping authority that would give Brussels new jurisdiction at the expense of national parliaments. The "power of disposal over primary law" that the treaty would grant the EU's bodies could also be described as the EU's "jurisdiction over jurisdictions," argued Udo Di Fabio, the judge charged with drawing up the ruling. This would amount to a kind of "self-service" mechanism by which the EU could expand its own powers without recourse to new treaties. Such a mechanism would be difficult to reconcile with the provisions of the German constitution.

Here is an example of how the treaty would encroach on national authority: Under the Lisbon Treaty, the EU can define certain criminal cases, such as those involving terrorism, human trafficking or cyber crime, as "transnational." But, "depending on developments in criminality," the Council can expand the EU's jurisdiction to any other aspects of criminal law as soon as there is a possibility that they will become transnational -- in other words, virtually always.

The potential conflicts are foreseeable. For instance, it would be difficult to persuade the Dutch that assisted suicide should be a crime. It would be just as hard to convince the Germans that hashish should be decriminalized.

The judges on Germany's Constitutional Court were troubled by such provisions. Judge Herbert Landau pointed out that decisions involving the application of criminal law to "moral and ethical value judgments" would have to be "debated by German lawmakers."

This is precisely where the judges on the Constitutional Court will probably focus their efforts, in order to come to grips with the dangers of the Lisbon Treaty at the national level. They could require the German parliament, the Bundestag, to incorporate a kind of "emergency brake" into the Brussels mechanism.

This would be possible, technically speaking, because governments can only approve expansions of powers at the European level by unanimous vote. In other words, the consent of the federal government would have to be firmly tied to that of the Bundestag.

This sort of veto could prevent representatives of the federal government from relinquishing powers too hastily. The Constitutional Court is concerned about how international bodies like the World Trade Organization (WTO) will treat German special interests in the future. What happens if, as the Lisbon Treaty provides, one high-handed member decides to speak for all 27 EU countries?

Because "the music of globalization is playing" at the WTO, the judges argue, the issue of who has the say there cannot be irrelevant. They fear that even the German water supply could be sold off one day in what Di Fabio calls the WTO's "bazaar atmosphere."

A veto, however, is only useful with those decisions that must be made unanimously. But all areas of domestic and legal policy where competency is transferred to the European bodies under the Lisbon Treaty would be exempt from the unanimity requirement. Even worse, the European Council can also decide to apply the majority vote principle to decisions that would normally require a unanimous vote. If that happens, Germany could simply be overruled, such as on the question of joint military operations abroad. The only safeguard is that the decision on which mode of voting to apply -- a majority or unanimous vote -- must be unanimous.

But, the judges asked astutely, does the confusing treaty also make it possible to simply do away with the unanimity requirement when it comes to expanding the EU's competencies?

The court heard arguments by one of the most fervent advocates of European rights, Berlin Professor Ingolf Pernice. His response, after lengthy deliberation: No, but "in an emergency" things would probably be different.