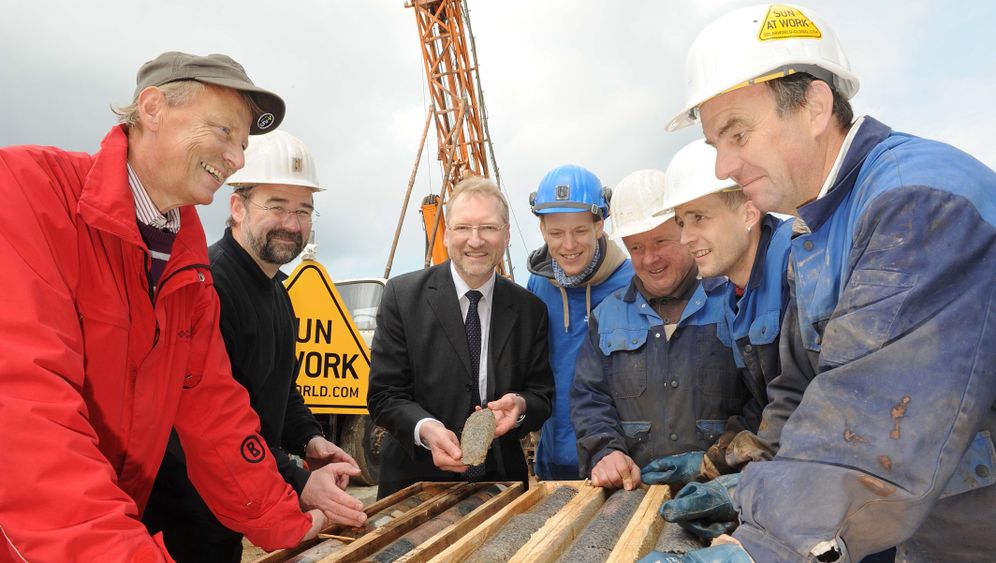 The road sign behind Armin Müller may read "summer trail," but the first thing the business manager does is bundle up. It definitely doesn't feel like summer up here, not even like spring. Cold gusts of wind and occasional rain showers have the head of the Solarworld Solicium company reaching for his black windbreaker. His little troop of guests is shivering too.

Müller's company, which specializes in photovoltaic products, has invited a handful of journalists to the edge of the Erzbegbirge, or Ore Mountains, near Altenberg. Here, on the German side of the border with the Czech Republic, SolarWorld is drilling for an underground lithium deposit. At least 40,000 tons of the light metal is believed to be hidden on the German side alone. It would be a treasure worth some $1.5 billion (€1.14 billion). "And that's the lowest estimate," says Müller.

His company aims to find out by the end of the year how much lithium actually lies in the ground. The hope is to explore the Czech side too, where at least 80,000 tons of the valuable substance is also likely waiting. The license to explore in Cinovec was issued several days ago.

The most important tool in the excavation is the drilling machine, which Müller demonstrates to his guests on the German side. The loud machinery tears a ten-centimeter wide hole into the earth. A few meters away, outside Zinnwald church, a similar drill awaits.

The machine has already drilled down to a depth of more than 80 meters to reach the rock formation that contains lithium. Core samples are placed in labeled wooden boxes. While the first samples are a red color, further down they are a speckled dark grey. And then, bingo! The sought-after metal is hidden within the so-called Zinnwaldite, a mineral ore that holds up to 0.3 percent lithium.

Each day drillers bore 10 to 15 meters deeper into the ground. The drilling runs diagonally in order to cut through as much of the 1,200-meter-long and 500-meter-wide deposit as possible. The goal is to reach a depth of 250 meters. The area has been drilled before, including multiple times by when it was still part of the former German Democratic Republic. Müller and his colleagues know from studying old documents how much lithium they can hope for. New data will fine-tune the plan and aid in the process of gaining international certification, an important step in attracting investors to the project.

Müller's company is interested in lithium because it wants to make customers an offer they cannot refuse: the chance to install lithium ion batteries in their cellars to store the energy that the solar panels on their roofs absorb. The raw material for the batteries will come from the ore, which is also important for the lithium batteries in electric cars. Recently, management consultancy Roland Berger estimated that the world market for lithium ion batteries will grow to $9 billion by 2015.

Another Set of Problems

As attractive as it all might sound, there is no shortage of lithium on the world market. In the coming years even a surplus is expected, especially if the Bolivian government develops a vast deposit in Uyuni, in the southwest of the country. And besides, doesn't SolarWorld have other problems to contend with at the moment? Solar firms in Germany are falling like dominoes. Solon, Q-Cells, and First Solar are just a few examples, with low-cost competition from China blamed for the demise of the industry. At SolarWorld too, sales dropped by 20 percent last year.

"Of course we have duties to our core business. But if anyone is going to succeed in navigating these rough waters, it's going to be a company like ours," says Armin Müller with resolve. According to him, even in tough times, companies should not give up on interesting projects like lithium exploration. But only time will tell whether the company can live up to expectations. The exploration is at present costing SolarWorld about €2 million ($2.65 million). That alone might be bearable, but the plans to build a mine and run it for 25 years would amount to between €20 million and €30 million ($26 million to $40 million).

On the other hand, a homegrown lithium industry could be quite interesting for Germany. Until now the raw material has been imported from remote salt lakes in Chile and Argentina, or from Australia. But raw materials exploration is very much in vogue at the moment in Germany. Even though the country generally considers itself lacking natural resources, Germans are currently exploring for oil and gas, not to mention copper and tin. And recently test drilling for rare earth minerals began northwest of Leipzig.

The Last Generation of Miners

While people in some regions of the country are opposed to new raw material projects, others are hoping that they will bring jobs. Thomas Kirsten, the feisty mayor of Altenberg, the eastern Germany city on the border with the Czech republic, is one of those who see potential in such projects. With a cap and a bright red ski jacket, he is the best-prepared to handle the cold weather at the drilling site. Kirsten hopes that the project will go ahead. "It is important that the people here have an economic perspective. I would be happy if mining were to be part of that again," he says. The mine could bring 150 jobs, while ore processing could double that.

There used to be a tin mine in Altenberg. But it was closed down after the fall of the Wall and since the local population has fallen by one-fifth. The Czech Republic's admittance to the Schengen zone, which shut down the big border station at Zinnwald, aggravated an already tough situation. The unemployment rate in the district is 10 percent, which seems relatively modest because, quite simply, "whoever doesn't have work, leaves," Kirsten says.

Still, there has also been a lot of development in the area. It is known as a spa and health destination and also increasingly for winter sports, including the Bobsleigh World Cup, which was held there this year. Wouldn't mining scare off tourists and athletes? Not according to the mayor. Ultimately, there won't be any mining shafts to act as eyesores. Trucks that transport lithium will divert over a ramp in the mountains. And dump sites won't spoil the landscape, because much of the waste material will stay in the mountains, he says.

That is, if the plan goes ahead at all. Geologist Kersten Kühn, from the engineering company Geos in Freiberg, is wholly focused on ensuring that it does. Until reunification he worked as the head geologist for the tin mine in Altenberg. Now he advises SolarWorld and hopes to revive old traditions. "The 750 years of mining we have had in the region has not yet come to an end. I am sure of that," he says.

Still, time is running out for the plans to be carried out. Only a few mining experts remain in the region. "We are the last generation of people who have experience in the mining industry. If we don't do it, who will?" asks Kühn.