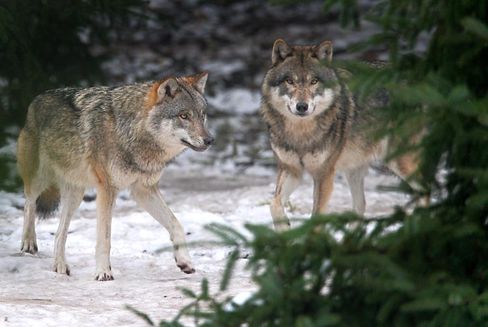 Wolves are moving closer to human settlements in eastern Germany.

Death is Vinzenz Baberschke's constant companion. Baberschke is the mayor of the town of Radibor in the eastern German state of Saxony, and when his mobile phone rings, it sounds as if death has come knocking. His ringtone for normal calls is Ennio Morricone's "Play Me the Song of Death," but when the biologists from the local wolf control agency are on the line, his phone emits the sound of howling wolves.

In his job, Baberschke deals with both phenomena: death and the wolf. His mobile phone is rarely silent, now that wolves are becoming more widespread in the Lausitz region in Germany's easternmost corner. Agitated citizens say that they have seen wolves in their towns and villages, and they no longer allow their children to go into the forest alone. Despite the use of electric fences, shepherds are reporting dead sheep, dismembered by wolves. There have already been 16 attacks this year. "We have a leash law for dogs and regulations prohibiting the ownership of fighting dogs," the mayor, a member of the conservative Christian Democratic Union (CDU), growls as he sits in his office. But protection against wolves, he says, is nonexistent.

Now that the European gray wolf, a protected species, is leaving its largely deserted territory on the Muskau Heath in Germany's far southeastern corner and suddenly migrating to the north and west, into the states of Saxony-Anhalt, Hesse and Lower Saxony, something of a Little Red Riding Hood syndrome has taken hold in Germany. There are now at least 40 wolves in Germany, as well as another 40 young animals that officials appear to have lost track of. In the eastern states of Saxony and Brandenburg, there have been 800 wolf sightings in the last 10 years, and some animals have recently been seen near human settlements. While animal rights activists and conservationists are delighted, others are terrified.

The mood in the "Gute Quelle," a pub in the town of Lippitsch, is already heated enough when the mayor says: "You can't go into the forest without a knife anymore." Hunters, he adds, have seen wolves "wagging their tails expectantly" -- waiting for people. The animals, says the mayor, must be taught to respect humans, if only with rubber bullets.

Conservationists and fearful citizens are at loggerheads in the Lausitz region. "When will the lights be on at night again?" a concerned citizen asks. Do wolves attack people during harsh winters? No, says the wolf expert. Wolves tends to avoid people. Even children? Of course, she says.

The mood is so nervous in wolf territory that it has sparked wild rumors. Did pro-wolf activists artificially settle the animals in the Lausitz region in the late 1990s? As a way of creating work and a source of funding? Isn't the Society for Nature Preservation selling howling wolf ringtones in return for donations? Aren't toy stuffed wolves and pendants featuring a wolf head in an oak wreath sold on the Internet? Hasn't an entire wolf industry developed around the myth?

'Predators Must Be Hunted'

A group called the Association for Safety and Species Protection is believed to be behind many of these rumors. Its 30 members, some of them "long-established Lausitzers," want to "call attention to the dangers posed by these large predators," says Christian Lissina, the head of the organization. In an effort to expose the danger posed by the wolves, they have traveled to Finland's Karelia region and have searched through archives at home dating back to 1613. In that year, there was an especially harsh winter in the area around the city of Bautzen. According to the archives, "wolves ran from the forests onto the land, where they dismembered many people and apprentices, and much livestock." A record dating from 1605 describes how two men were found dead after they had "fallen into the murderous wolves' dens."

"Predators must be hunted," says Lissina, who hunts in the local forests. He is convinced that the wolves' territory must be regulated before even worse things happen. Lissina likes to remind people that when Germany's men were away at war in Russia, the wolves attacked the villages.

For Jana Schellenberg of the state-run "Lausitz Wolf Region" contact office, these are nothing but hunters' tall tales. In the past 50 years, she says, there have been only nine wolf attacks directed at people. In five cases, the animals had rabies. "Because rabies was eradicated in Germany, this is not a problem for us." The remaining four cases, says Schellenberg, occurred near a chicken farm in Spain, where the animals came too close to people and were eating waste from the processing plant. "Those types of animals must be removed," she explains.

But wolves do not always behave the way their protectors like to claim. Holger Schuldes's flock of sheep near the town of Königswartha was protected by a 90-centimeter (three-foot) electric fence, topped with a streamer at 1.4 meters (4.6 feet) to keep out wolves. Wolf experts had claimed that the gray hunter is unable to scale barriers at that height. Until one morning in August, that is, when two Merino sheep were found lying in their blood on the meadow, their stomachs ripped open, their intestines strewn all over the ground and one heart missing. All of this happened less than 300 meters (984 feet) from the nearest house.

Now Zora, Terremotto and Trafoi protect Schuldes's flock from the so-called Milkel pack. They are Maremma sheepdogs, trained to fend off bears and wolves, brought in from Switzerland by the state Environment Ministry in Saxony for a three-month trial period. State Environment Minister Frank Kupfer likes to hand out advice to angry sheep farmers. He tells them that the wolf becomes accustomed to taking sheep as its prey. "That's because the wolf is only human. Why should it make hunting difficult when there is much easier way to do it?"

Local hunters may have taken the same pragmatic approach. The local pack has not been spotted for weeks. Did the hunters take matters into their own hands and commit a massacre at dawn? Wolf foe Lissina, at any rate, claims that he finds this hard to imagine. After all, he says, it would have been a great risk for the hunters. In August, two hunters in Lower Saxony were fined €10,800 ($14,580) and €4,000 ($5,400) for allegedly killing a wolf.

The gray immigrant from Poland is, at the very least, a competitor for hunters. Wild sheep on the Muskau Heath have already been completely eliminated, says Stefan Bachmann, the head of the Hoyerswerda Hunting Association. And the red deer population, he adds, is also in rapid decline.

Under these circumstances, a little anti-wolf sentiment doesn't exactly hurt. When the region's mayors came together for a wolf conference at the end of September, a wolf promptly made an appearance in the town of Wittichenau in Saxony. But instead of attacking innocent children, the beast allowed someone to feed it a bratwurst from the school cafeteria. The pup, as it turned out, was not just accustomed to people, but was almost completely blind. Lissina and his group were promptly accused of deliberately spreading fear. "I bought it on eBay. Blind wolves are cheap," the hunter jokes, dismissively. On a more serious note, he plans to file a criminal complaint against the release of a wild animal.

Meanwhile, dangerous wolf sightings continue in this rural area. In the village of Hoske, a man driving a car spotted a wolf strolling, or rather limping, along the main street.

Wolfgang Bramborg, the local mayor, was quick to identify the dangerous predator as Jonny, a local German shepherd mutt. Not only does Jonny have a limp, but he is also 14, mostly toothless and hard of hearing.