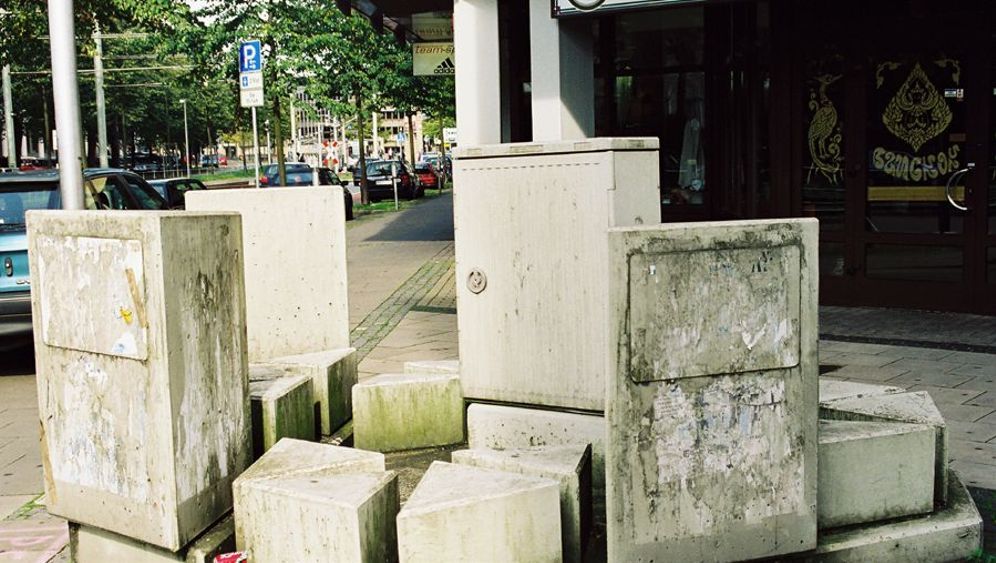 It isn't difficult to describe the plenary hall of the state parliament building in Lower Saxony. It is hideous. Heinous. Revolting. A boxy concrete abomination whose ugliness stands out even amid the abundant architectural putrescence that Hanover has to offer. And soon, if state representatives have their way, the not-quite-50-year-old-building is to be demolished.

"I think it is very important, when it comes to buildings that everyone agrees are ugly, that we find methods that encourage people to see them in a different, more appreciative light," Turit Fröbe, an architect at the Berlin University of the Arts, told SPIEGEL ONLINE. "If you just let them sit there and don't do anything, there is no way for people to develop an affection for them."

In the years after World War II, many cities opted for a modernist style of construction that emphasized spaciousness over density and speed over deliberation. Furthermore, Germany sought a break with its recent history, and a completely new style of architecture was seen as one way to achieve that.

Indeed, as architect Albert Speer, son of Adolf Hitler's favorite architect of the same name, recently told SPIEGEL ONLINE: "The real cause of the calamity of postwar construction is this complete rejection of history."

The result, though, has been that many cities in western Germany look very similar to one another: wide highways knifing through city centers; isolated residential high-rises on the edges of town; and pedestrian zones dominated by concrete behemoths housing department stores and shops. Even the chain stores are the same in city after city: a seemingly endless row of department stores like Karstadt and C&A and high-street chain stores like H&M, NewYorker, Pimkie and many more. It can be disorienting.

"Nowhere could you say that modernism has produced a square like Rome's Piazza Navona," says Christoph Mäckler, a leading German architect who has written a book on architectural sins in his home state of Hesse, in conversation with SPIEGEL ONLINE. Mäckler, whose firm advises cities on how to improve some of the more egregious errors of the 1950s, '60s and '70s, even jokingly suggests a kind of cash-for-clunkers program for offensive architecture.

It is an idea that Fröbe herself would have supported at one time. In 2007, she published a page-a-day calendar with an image of a particularly shocking architectural transgression -- called Bausünden in German, or "architectural sins" -- for each day of the year. Stamped across each image was a one-word command: "Demolish!"

It was a project triggered by her encounter with a simple street-side electrical transformer in Bielefeld. Rather than leave well enough alone, the city had "decorated" the unit by surrounding it with concrete shapes to create a piece of public art. "It was truly awful," Fröbe reports.

She embarked on a tour of Germany that would take her to 80 cities in four-and-a-half years. But early on, she had an epiphany.

"After starting in Bielefeld, I went to Hanover," she says. "But I found the same crap as in Bielefeld. I soon realized it is difficult to find good, original and photogenic Bausünden. It is the good ones that you can build a relationship to. Over time, I began to develop an appreciation for them and I became a fan."

Merlin Bauer, a Cologne-based architect, came to the same conclusion. While most know Bauer's hometown for its beautiful, centuries-old cathedral, the structure is about all that remains from the prewar city, demolished as it was by Allied bombs. Indeed, the 1960s-era telecommunications building located not far away occupies an equally prominent place in the city's skyline. The exceedingly unattractive high-rise, striped and checkered with different shades of gray, is topped with three enormous concrete slabs, making it look as though builders simply forgot to enclose the top floors.

Not long ago, Bauer launched a project called "Liebe deine Stadt" -- "Love Your City" -- in which he sought to counteract the belief held both in Cologne and elsewhere that the city is ugly. Each month, he placed the phrase "Liebe deine Stadt" in gigantic cursive lettering on the top of a particularly monstrous edifice. He wanted to draw people's attention to what he thinks is the unique beauty of the kind of modernist architecture that makes wide swaths of Cologne painful to look at.

"Nobody would think of putting such a structure in the middle of a city anymore," Bauer said of the telecommunications building. "But it was a symbol of the dawn of the media age. If you look closely, you can see that the designers showed a loving attention to detail. I wanted to sensitize people to modernist, postwar architecture."

He claims he was successful. "I think I was able to generate a new openness to this kind of architecture," he says.

It is a goal that many in formerly communist eastern Germany have taken to heart as well. After the war, East Germany too sought to reconstruct as quickly as possible and, as across Eastern Europe, relied heavily on pre-fabricated concrete slabs to slap together both residential high-rises and imposing administrative buildings. Other structures too were put up with little apparent regard for aesthetics.

These days, after years of young people turning their backs on the east for job opportunities elsewhere, depopulated municipalities in eastern Germany have begun demolishing some of the now empty communist housing projects that blight their towns.

Some structures, however, have remained. Jena, for example, located just southwest of Leipzig, inherited a series of outsized pipes snaking through the heart of town and used to provide heating to entire city quarters. Not only are the pipes an eyesore, but they also serve the problematic function of slicing the city neatly in two. A plan to bury them proved too expensive for the financially strapped municipality. 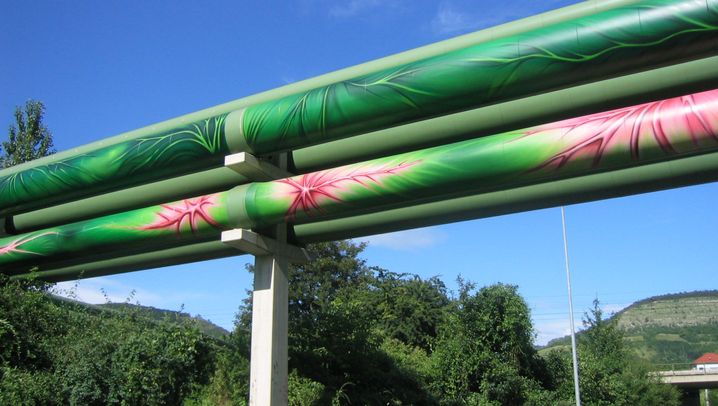 But instead of resigning itself to living with a hated scar running the length of town, Jena leapt at a 2004 idea proposed by master's student in architecture at the Bauhaus University in nearby Weimar. Dana Kurz suggested that, instead of getting rid of the hated pipes, why not teach people to love them?

In the ensuing years, a series of projects -- transforming one section of pipes into a living room setting complete with an oversized couch; turning another corner into a classical music stage; using parts of the pipes for several art projects and involving locals in beautification schemes -- has managed to do just that.

"At the beginning, we started by saying they aren't that bad and decided to make something positive out of them," Kurz told SPIEGEL ONLINE. "We didn't want to hide them, but rather turn them into a kind of theater backdrop. They have a dynamic, a flow."

It is exactly the kind of project that Fröbe imagines for the dozens -- hundreds, even thousands -- of architectural sins which dot German cities across the country. She says that, in an age when cities "all look the same, like an Aldi supermarket where everything is always in the same place," it is a city's signature buildings, some of which may indeed be hideously ugly, which can help residents develop a feeling of identity.

"Many cities don't take care of these buildings because they are no longer fashionable," she says. "But if they just let them sit there and don't do anything with them, there is no way for people to develop a positive feeling toward them."

Architect Mäckler, in his way, agrees. "Time heals lots of wounds," he says. "People can get used to a lot of things even if they are totally ugly. But I still think you have to do what you can to improve them."