Editor's Note: The Munich trial of the far-right neo-Nazi terror cell, the National Socialist Underground, which is accused of murdering 10 people, mostly of Turkish descent, is currently ongoing. SPIEGEL ONLINE International will be posting stories on key days during the trial as well as overall analysis of the case.

On Nov. 8, 2011, investigators were offered an opportunity that would later present itself only rarely. In the eastern German city of Jena, Beate Zschäpe had turned herself in, and was taken by police to Zwickau. It is there, according to the charges against her, that she had set the Frühlingsstrasse 26 apartment on fire that she had shared with her comrades Uwe Mundlos and Uwe Böhnhard until the end. To secure possible evidence, police made Zschäpe change her clothes and put on a police tracksuit.

According to one police officer, she felt very uncomfortable wearing it. He was the officer in Zwickau who confirmed her identity and informed her of her right to remain silent. After that she declared that she didn't want to give any further information, but the police officer still managed to continue a "conversation." It was an "icebreaker," as defense attorneys put it.

It was the first time that Zschäpe spoke to police. And it wasn't an interrogation, but just a chat, the witness stated. Something like that, he added, was better than just silence. Among the things that slipped off of Zschäpe's tongue was the question of whether her cats were being taken care of. "I said, the animals are alive and are being kept in an animal shelter," the police officer told the court.

But how did Zschäpe -- who is currently on trial in Munich's higher regional court on charges of being an accomplice in 10 murders believed to have been part of a right-wing terrorist crime spree -- experience the situation? Was she truly happy, as investigators claim? For more than 10 years she had lived under an assumed name, cut off from her family, friends and earlier acquaintances since 1998. She had been living in fear of discovery, but now someone was there she could talk to.

"We were respectful of the fact that she didn't want to make any statements about the case," the witness said in court testimony given on Tuesday. She spoke about her childhood in Zwickau and said she had been a "grandma's child," having a much better relationship with her grandmother than with her own mother. "I can still remember," the witness said, "that we asked her if other crimes were planned that could still be prevented." She said no, according the witness.

"She said that she called the mothers of the two Uwes and informed them of the deaths of their sons," he said, referring to the double suicide of the two young men after a botched bank robbery. Zschäpe had been relieved to sign things with her real name again, the witness added.

"Did she say anything about the parental home of the two Uwes?" leading Judge Manfred Götzl asked. "She said they had come from sheltered homes, and she couldn't really explain the development of her friends -- at least compared to her own life history," the witness answered. "I can still remember us asking her whether she had wanted to take her own life during the last days, given that the two Uwes had committed suicide on Nov. 4," he said. The police officer said she had answered with a yes, but that she hadn't found the strength to do it.

In the days between their deaths and turning herself in, the judge asked, was she aware of the scope of what was about to happen to her?

The witnesses were also asked why a female police investigator from the southern state of Baden-Württemberg -- the state where the charges claim the NSU shot and killed police officer Michèle Kiesewetter -- had been present during the "conversation"? Was she asked to come? If so, then why? Had the investigators previously agreed to initially avoid asking Zschäpe certain questions such as whether she had been involved in Kiesewetter's murder -- or had they limited questioning to the allegation she had committed arson in the apartment she shared with Mundlos and Böhnhard in Zwickau?

This was followed by the kind of verbal sparring that has become typical in the NSU trial. Thomas Bliwier, the lawyer representing the family of murder victim Halit Yozgat, who are co-plaintiffs in the case, wouldn't back down. Jens Rabe, who is representing the family of murder victim Simsek, joined in, citing the obligation of police officers to reveal the facts under suspicion during interrogations. But Annett Greger, the principle state attorney representing the Federal Prosecutor's Office, held that such lines of questioning were "irrelevant." The witness then pointed out he had been restricted in the scope to which he could testify, a statement that prompted lawyer Bliwier to complain of an unacceptable unwillingness to testify. These exchanges are a daily occurrence in a trial like this, but in the end they could be decisive.

It is more than obvious that police knew who they had in their hands at the time. Several times, the witness said he had not wanted to go too far. They had paid special attention not to use any "forbidden interrogation techniques," which Zschäpe had also been assured of. But was she even in a state to comprehend this? "My impression was yes," the police officer affirmed. "After all, Ms. Zschäpe wasn't forced to say anything," he answered. It just happened, "by pure chance."

An official with the Federal Criminal Police Office (BKA) who accompanied Zschäpe when she was transferred from a jail in Chemnitz to the Federal Court of Justice in Karlsruhe on Nov. 13, 2011, also testified on Tuesday. The flight on a German federal police helicopter took an hour and 45 minutes. Afterwards, the official had a chance to have a conversation with Zschäpe before the suspect was interrogated by the investigating judges at the Court of Justice.

At the time, officials were still hoping that Zschäpe might yet testify given her declaration that she hadn't decided not to testify. She also said that she didn't want her defense to be handled by someone from the far-right scene. The witness recalled with particular clarity that Zschäpe had conveyed to her that it had been clear to her, Uwe Böhnhardt and Uwe Mundlos that they would one day be caught as a group. She also said that, now that she was no longer living underground, she was sleeping better.

Then she spoke about her cats again, the witness states. Zschäpe said they had thought about getting a dog, but had been concerned they might get caught if they registered the animal. "I thought to myself, those are very sophisticated thoughts for someone living underground," the BKA man told the court.

The witness also recalled Zschäpe telling him she had promised Böhnhardt and Mundlos that she would inform their parents if anything happened. "She described herself as a 'fact-oriented person'" when it came to forming her opinions, the witness continued. "She listened willingly to my opinion that it would be better for her to speak. But in the end she didn't want to do that."

The witness said it had made an impression on him how emotionlessly Zschäpe reacted when the NSU's "murderous deeds were read out." Also when it came to the deaths of her companions. "No tears, she didn't even gulp," he said. 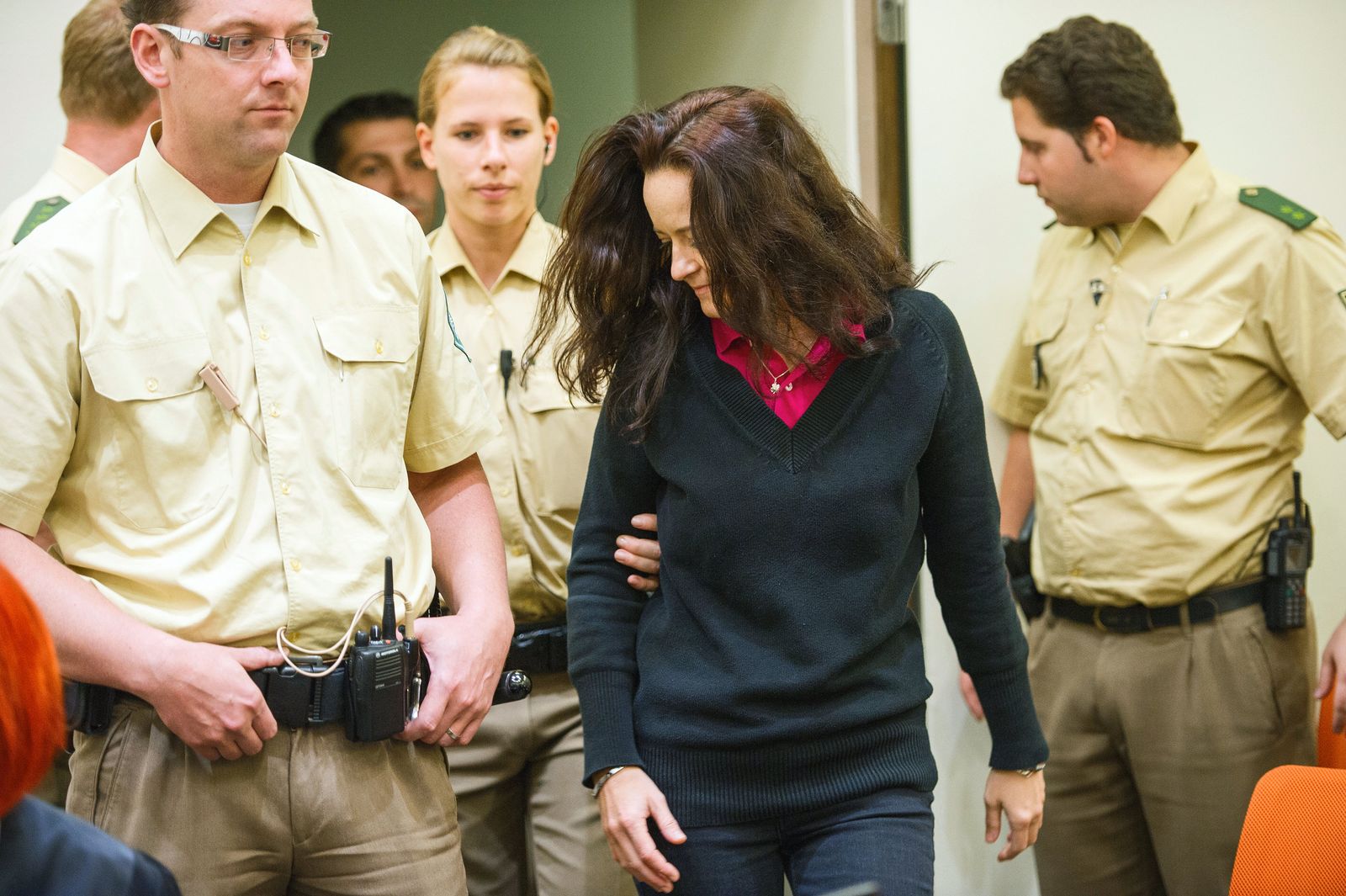 Suspect Beate Zschäpe is escorted by police into a courtroom in Munich on Tuesday.