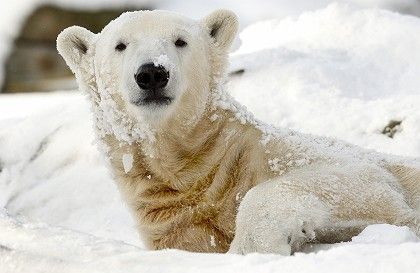 Cute Knut: But will the popular polar bear find amore with his new Italian companion?

The wilderness years are over. According to a report in the Berlin daily Tagesspiegel, Germany's favorite polar bear, Knut, will soon be sharing his home with an Italian lady friend, courtesy of the Munich Zoo Hellabrunn. The almost 3-year-old polar bear, Gianna, is set to arrive in September as her enclosure in Munich undergoes renovations.

Her arrival will also mark the first time that Knut ever encounters an animal of his own species.

Fans of the popular German polar bear will be hoping that Gianna's arrival will mark a welcome end to a lonely spell for Knut, whose beloved caretaker, Thomas Dörflein, died unexpectedly last September. Dörflein had acted as the once tiny bear's surrogate parent after the cub was rejected by his own mother.

Still, Knut might have a bit of an uphill battle when it comes to wooing Gianna. In Munich, she disliked her last intended mate, Yoghi, so vehemently that she had to be relocated to a new enclosure -- with Knut's grandmother, no less. But be they lovers or fighters, we won't be hearing the pitter-patter of tiny polar bear paws just yet, as Knut still needs a few more years under his belt before he's ready to mate.

Knut's glamorous new friend -- named after Italian singer Gianna Nannini -- will only be a temporary addition at the Berlin Zoo and return to Munich once the renovations are done. Munich's zoo is already mourning the loss of Boris, popular 32-year-old bear who recently died as a result of heart problems.

This is not the first time Knut has hit the headlines in recent months. Until July, he was at the center of a legal dispute between Berlin Zoo, where he lives, and Neumünster Animal Park, which houses Knut's father. Both zoos wanted to cash in on the polar bear's extraordinary popularity, but they eventually reached a settlement of €430,000 that allows Knut to stay in the German capital he calls home.