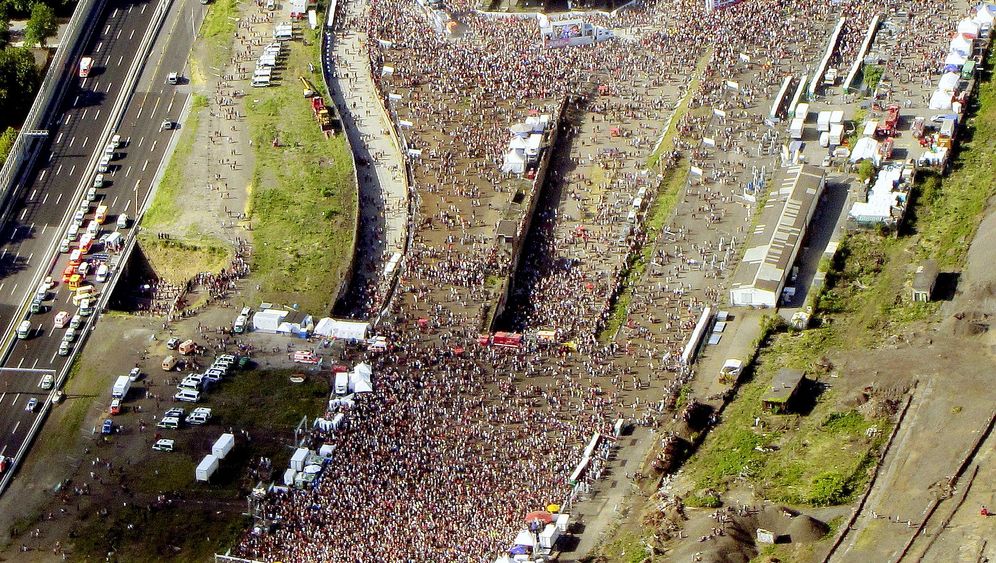 Lena is standing at the corner of a small food stand on Neudorfer Strasse near the main station in Duisburg. Her eyeliner is running in thin lines down her cheeks, she has knotted together her torn top as best she can. The 21-year-old student from the nearby city of Essen is crying quietly to herself. She is not wearing any shoes.

She lost them in the tunnel.

She had been elbowed and shoved, complete strangers had grabbed her hair, her arms, until, eventually, she managed to make it out of the suffocating crowd -- at times stepping over the unconscious and the seriously injured. "At times, there were five or six lying on top of one another," she says. "Some were screaming for help, others weren't making any noise at all."

It was Lena's first ever visit to the Love Parade. It was the first time in her life that she saw a dead body.

It was a young woman in a sleeveless top, her neck smeared with glittering makeup and wearing a necklace of fake plastic flowers. She was one of the 19 people who died on Saturday after a mass panic at the Love Parade in Duisburg, three of them succumbing only after they had arrived at the hospital. Many others had to be resuscitated. According to police, a total of 342 were injured.

Struggling to Come to Grips

Hours after the 5 p.m. stampede, the site of the tragedy is blocked off, with police not allowing anyone through. But one can see the remnants of the mass panic nearby. Crushed barricades and mounds of garbage are everywhere, with dazed partygoers meandering aimlessly, some of them covered in shimmering gold first-aid blankets. Police and ambulance sirens blare constantly.

Those who aren't completely helpless are being left to their own devices, says a policeman on site. He says he and his colleagues are simply ignoring the clear indications of widespread drug use at the party. "If we wanted to take every high person into custody, we would have had to have built an addition to the station before hand." He notes with relief that the evening is warm. "No one is going to freeze."

Aid workers, most of whom are not from Duisburg itself, are struggling to come to grips with the situation. Further afield, the city has ground to a halt as highways are closed and streets are blocked off in an effort to help those that need it.

Tens of thousands of festival-goers made their way to the Duisburg train station following the Saturday evening tragedy. Buses were quickly mobilized when it became clear that not enough trains were available. By 1 a.m., the station was largely empty, but 15 buses still idled on the street out front. Nobody quite seemed to know what they were doing there.

Lena, for her part, couldn't stop thinking of the dead woman she had seen. "I don't know if I will ever forget her empty gaze," she says, "and the screams of the others." Her friend Tim clutches her hand.

By early afternoon, the techno party was already "desperately overcrowded," Tim says. "The only entrance was through the tunnel, there was no other way to get to the site." At the beginning, he said, the shoving "was almost fun." Everyone was singing and chanting together, it was a friendly and relaxed atmosphere," he reports. "That's the point of the Love Parade, isn't it?"

But then, things began to get more aggressive. "It was tight, hot, unbearable. Everyone wanted to get to the party, or just out of the crowd." Some tried to find their own way out, slithering up poles or climbing a narrow staircase out of the crowd. Dehydrated, exhausted partiers were handed out over the heads of the masses. Some of those trying to climb out fell back into the crowd. When that happened, say police, mass panic broke out.

Hours later, Tim and Lena are sitting next to the overflowing garbage bin of the food stand near the Duisburg train station and are no longer paying attention to what is happening around them. Helicopters are still circling overhead, drug-addled partygoers are stumbling by, sirens pierce the night. Lena and Tim don't want to see any of it any more. They are waiting for Lena's father to pick them up -- all they want is to go home.

Martin, a 24-year-old law student from Munich, is sitting on the pavement with a group of friends at a bus stop. He had wanted to party through the night -- now he and his friends are distraught and don't quite know what to do. They had been partying since before noon -- and hadn't noticed that just a few hundred meters from them people had been crushed to death in the crowds.

Organizers elected to continue the party so as to avoid even more panic. People continued dancing to the pulsing techno bass as if nothing had happened. At 11 p.m., Martin recalls, an announcement came through urging everyone to slowly make their way home.

Many of those at the mass rave knew about the deaths from messages received on their mobile phones and went home. But Martin and his friends hadn't looked at their phones. They were merely confused as to way the main act, DJ David Guetta, hadn't spun. "Oh God," Martin says. "We were booing and whistling and only thinking of our own fun." Only when they were leaving the site did they see the messages from worried relatives and friends on their mobile phones. "My sister was crying," Martin says. "She had been trying to reach me for hours and had also called one of the hotlines set up for family members."

Two federal police officers, exhausted after a 15 hour shift, are sitting in a fast food restaurant. One of them was working at the site of the accident; he and his colleagues pulled partiers out of the crushing crowds. "These people were in the best of moods as they went to the event, and then suddenly they were afraid for their lives," he says. He says the investigation into who is responsible for the 19 deaths needs to be rigorous.

There are plenty of questions that need answering. Why was the tunnel the only entrance and exit to the site of the party? Why were there no emergency exits? Was the security plan for the event adequate? According to information received by SPIEGEL ONLINE, officials had planned for a maximum of 500,000 people. Instead, more than a million showed up -- with just 1,200 police to provide security. The debate is just beginning.

Eventually, Lena's father arrives to pick her and Tim up and take them home. He turns into Neudorfer Strasse, parks next to the food stand and gets out. When he sees his daughter, he remarks, "you aren't wearing any shoes, dear."