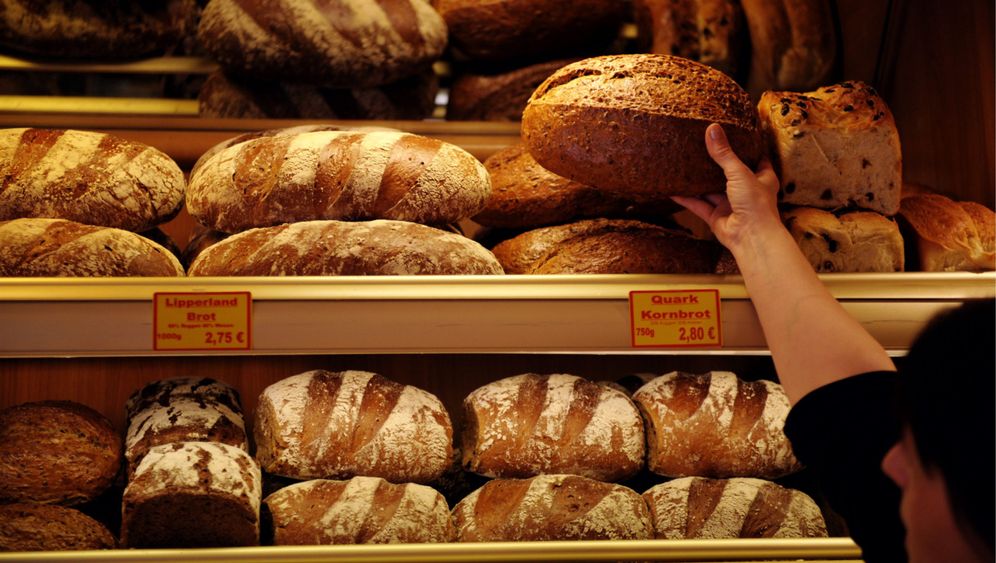 "Without my husband, I definitely couldn't survive working in this job," says Antonie D'Elia from behind the counter of a dry cleaning shop inside Berlin's busy Friedrichstrasse underground station. She pauses to hand a customer his freshly-pressed shirt. "But then again, maybe it's my own fault for having children young and not going on to higher education."

A middle-aged woman selling sausages at a kiosk on Berlin's central Alexander Platz square reveals that she too is finding it difficult to make ends meet. "After rent and bills there's barely anything left at the end of the month," she tells SPIEGEL ONLINE.

Both women work in what the German Institute for Economic Research (DIW) describes as the "low-wage sector." They loosely define this as people who earn less than two-thirds of the median hourly working wage of €9.62.

One in five Germans falls into this category and almost two out of every three is a woman, the DIW reports. Unlike most European countries, Germany does not have a federal minimum wage. Instead, the state guarantees a "minimum standard of living" for its citizens. In practical terms, that means the government -- rather than employers -- ensures that people get enough money to survive. This policy is meant to provide employers with greater flexibility, and some credit it as one reason behind Germany's low unemployment rate. But others argue that the state is simply supporting bad employment practices.

According to a DIW study published last year, wages fell in real terms for all but the top 10 percent of earners in Germany between 2005 and 2010. This had a particularly acute effect on those earning the least. "As a rule, the lowest earners spend the highest portion of their income," study co-author Karl Brenke explains.

Low-wage workers also end up spending a much higher proportion of their income on mandatory health insurance, as any income above €46,000 in annual salary is not subject to premium payments. Thus, while a senior engineer earning €150,000 a year is only required to pay 6.6 percent of his total income in social security contributions, a laborer who makes only a tenth as much ends up paying 20.7 percent.

Increasingly, such wage disparity is leading to social inequality in Germany, a country that strives to ensure prosperity for all. And this is happening despite the fact that the German economy is booming, with unemployment at just 7.2 percent in March. Last year, The Economist celebrated the successful German economy with an article entitled, "Angela in Wunderland." But for the millions of low-wage workers not feeling the benefits of the economic upswing, such praise is just as unconvincing as scenes from the fantastical novel the headline invokes.

About one million workers qualify for state support because their earnings are considered too small to survive on, says Wolfgang Uellenberg of public service trade union Ver.di. Although precise data is unavailable, he says that a "sizeable proportion" of those who receive government income supplements are actually working full time. And in some cases, welfare payment structures mean that low-wage workers could actually make more money if they chose not to work and received unemployment benefits instead.

Many others are working in temporary jobs designed as a stepping stone into steady employment. But according to Uellenberg, a third of these people end up in such jobs for more than nine months. They often do the same job as employees with permanent contracts, but for less pay. They also are often excluded from collective bargaining agreements within their industry that would otherwise ensure fair wages. "The government is supporting bad employers," Uellenberg told SPIEGEL ONLINE.

Complicating things further, the lack of a federal minimum wage is compensated for with around 480 "regional" minimum wages, he adds. Trade unions also often negotiate minimum wage agreements within specific industries. The argument that a national minimum wage would lead to an increase in unemployment is "nonsense," Uellenberg says. "Competition would simply shift. There would be more emphasis on good service rather than on cheap labor."

Indeed, if a nationwide minimum wage of €8.50 ($11) were introduced in Germany, 25 percent of all female employees and 15 percent of male workers would immediately earn more money.

Dry cleaner shop employee Antonie D'Elia doesn't blame her employers for her low wages. "They could probably afford to give me an extra euro an hour," she says. "But on the other hand, they aren't driving a Mercedez-Benz either." She motions to the board displaying prices. It costs just over a euro to get a shirt washed and pressed. "That shirt has to be transported to our central station, cleaned and ironed. If you consider electricity and rent costs, you can see how difficult it is to make money," she says.

Despite being low on cash, D'Elia is determined not to apply for state welfare. "I would do anything to avoid Hartz IV," she said, referring to the country's welfare program. "I would work 60 hours a week cleaning not to have to go through that level of interrogation. They ask you about every detail of your life."

Reforms in the Works

Politicians seem to have taken notice of the problem, though. Social-equality policies taken up in anticipation of the 2013 election by Chancellor Angela Merkel's conservative Christian Democrats and their Bavarian sister party, the Christian Social Union, include both a universal minimum wage proposal and improvements for temporary workers. The minimum wage policy is reportedly close to completion, and is being hammered out by a commission of employers and employees. It is expected to be unveiled this spring.

Meanwhile Merkel's fellow conservative, Labor Minister Ursula von der Leyen, has given unions and employer groups until this summer to agree on when temporary workers will begin receiving the same wages as those on permanent contracts. If they fail to come up with an arrangement, von der Leyen has threatened to deal with the issue herself.

Such reforms would be a welcome change for low-wage workers in Berlin. Back at Alexander Platz, across from the sausage kiosk, a young man who gave only his last name, Dommach, is serving coffee in a bakery. "Do I earn enough? Ha, No!" he says. But has he ever broached the question of a raise with his boss? "I have," says Dommach, laughing. "He said no."

Dry cleaning shop worker D'Elia used to work in a bakery too. "I'd make hundreds of sandwiches every day and sometimes I'd stop and think, In the last hour I haven't earned enough to buy even one," she says. 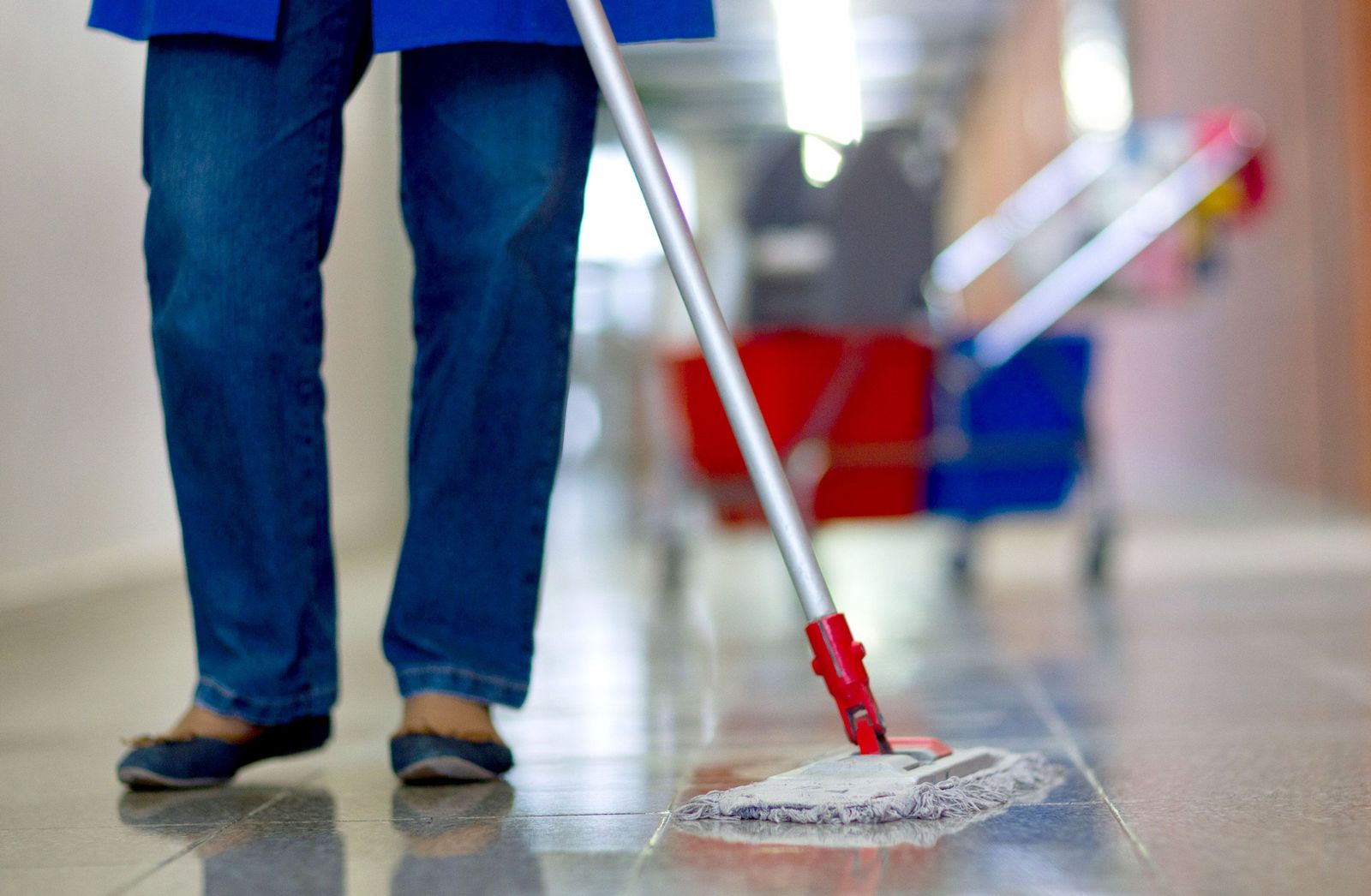 Many workers in the service industry, such as cleaning staff and shop workers, work in the low-wage sector, defined by an hourly rate that is less than two-thirds of the median hourly working wage of 9.62. One in five Germans falls into this category, and some are forced to supplement their income with state welfare. 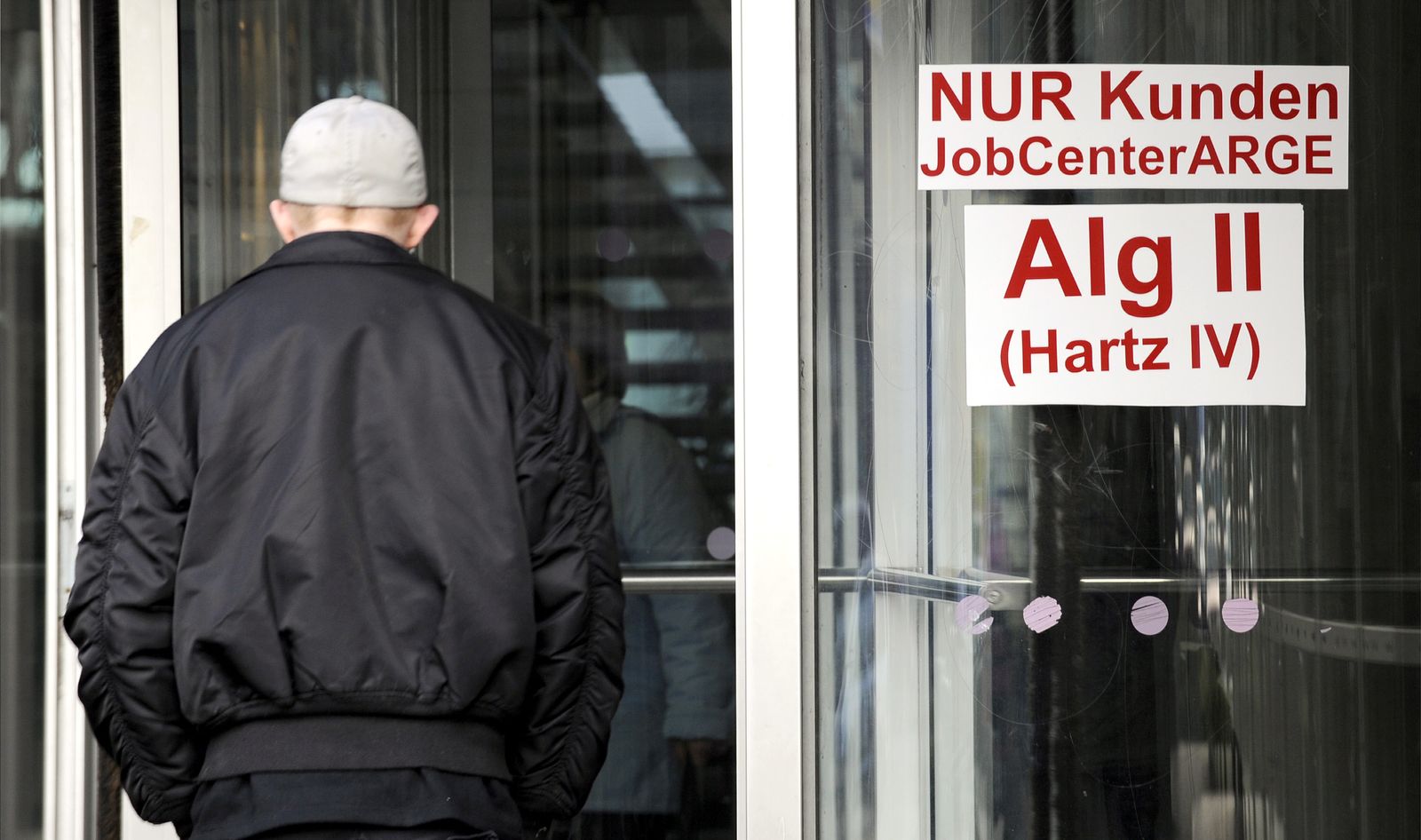 About one million workers qualify for state support called Hartz IV because their earnings are considered too small to survive on, says Wolfgang Uellenberg of public service trade union Ver.di. Here, a welfare office in Hamburg. 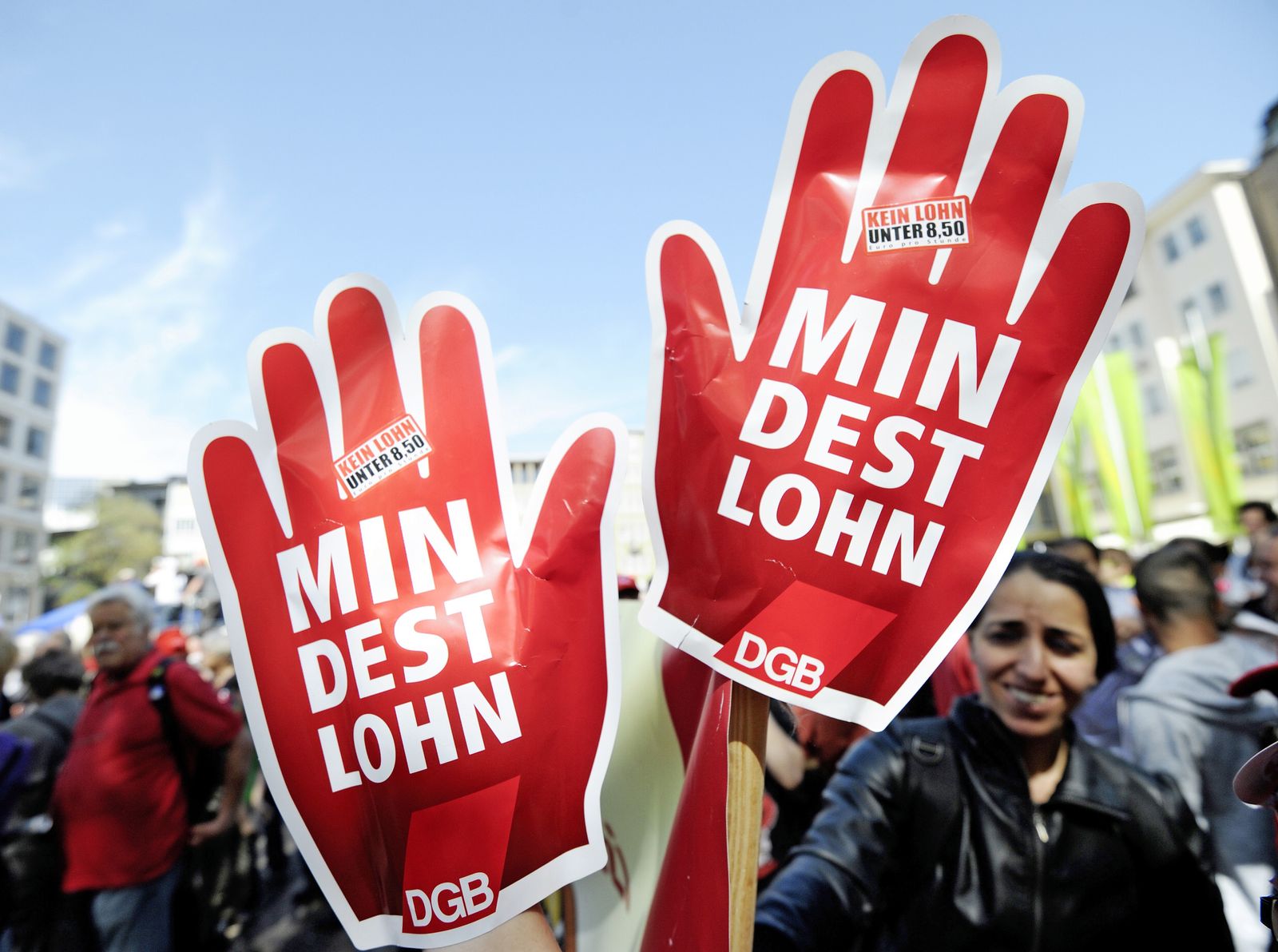 Protestors in Stuttgart demand a minimum wage at a protest in May 2012. The argument that a national minimum wage would lead to an increase in unemployment is "nonsense," Ver.di's Uellenberg says. "Competition would simply shift. There would be more emphasis on good service rather than on cheap labor."