Gerhard Schröder is back. On Wednesday evening, the former German chancellor made his way to the small town of Osterholz-Scharmbeck in the state of Lower Saxony to engage in one of his favorite pastimes: campaigning. "Stephan is one of those you can depend on," Schröder assured his audience. "He will do a great job!"

Schröder was referring to Stephan Weil, the Social Democratic candidate who would like to take over the state governorship from David McAllister in elections this Sunday. But for all the praise the former German leader showered on Weil, Schröder's presence at the campaign event was nothing short of an acknowledgement that all is not right in the SPD's world. As the party's best campaigner -- he is to the SPD what Bill Clinton is to US Democrats -- Schröder is only hauled out in moments of need. And Lower Saxony was not supposed to be one of them.

Just a few short weeks ago, polls indicated that Weil, with the help of the Green Party, would easily defeat McAllister's re-election campaign in the last state vote before German general elections. The lead, however, has vanished, with a poll released by tabloid Bild on Friday showing the possible SPD-Green coalition now tied with McAllister's coalition pairing the center-right Christian Democrats with the business-friendly Free Democrats (FDP). Both camps stand at a combined 46 percent. And that is a bad sign for a center-left party that would like nothing more than to unseat Chancellor Angela Merkel this fall.

A lot is riding on Sunday's election in Lower Saxony. Several parties are looking to the state with a mixture of fearful anticipation and nervous fatalism. The SPD in particular is looking for a bounce from the state to help it begin making up ground on the national level that it has lost during the last several weeks of slip-ups by its candidate for the Chancellery, Peer Steinbrück.

It has been a steep slide. At the beginning of last October, just days after Steinbrück's candidacy was made official, the SPD shot upwards in the polls, to 30 percent in one nation-wide survey. The former finance minister, who helped Merkel guide Germany through the worst of the financial crisis in 2008 and 2009, was widely respected by many in the country.

But the bump didn't last. It quickly came out that Steinbrück had spent the few years since the SPD crashed out of government in 2009 on a highly lucrative speaking tour, amassing over a million euros in fees. There is, of course, nothing untoward about his extracurricular earnings. But for a party that sees itself as the political arm of Germany's working class, the headlines generated were not helpful.

Steinbrück has also accelerated the downward trend by tripping over his tongue. In addition to saying that Merkel is the beneficiary of a "female bonus," not the kind of thing that will endear him to women voters, he also complained that the chancellor's salary was too low. Combined with an early December statement that he "wouldn't buy a bottle of Pinot Grigio for only €5," it began to seem as though his own bank account was his primary focus.

Perhaps not coincidentally, a recent poll found that support for the SPD has plunged to a paltry 23 percent. In the last national elections in 2009, the SPD received 24 percent, which was a postwar low. The SPD's decline is attributable in part to the recent rise of two other left-of-center parties, the far-left Left Party and the Greens, the latter of which has established itself as a mainstream group.

It is that plunge in support which has placed so much importance on the Lower Saxony election this Sunday. Should the SPD, combined with the Greens, not unseat McAllister, there are some observers who think the center-left party might consider jettisoning Steinbrück as its general election candidate.

The SPD, however, is not the only party that is apprehensive about Sunday's poll. The FDP is hoping that Lower Saxony can provide the salve on a number of wounds created by months of low poll numbers and a handful of bitter election defeats in recent years. Until this week, that looked like nothing more than wishful thinking. The party had spent months polling below 5 percent in the state, short of the 5-percent minimum necessary for representation in state parliament. Friday's poll, however, had the party at exactly 5 percent. If the FDP gets in, Governor McAllister has a good chance at re-election. If it doesn't, he will be out of a job on Monday.

For the FDP, however, the vote is just as crucial. Its recent string of failures has taken a toll, with many in the party openly questioning the leadership of party head Philipp Rösler, who is also Merkel's economics minister. And on Friday, the attacks got even worse. Speaking to public broadcaster ARD, FDP parliamentary floor leader Rainer Brüderle said that he is in favor of moving up the party's convention, currently planned for May, at which Rösler is up for re-election. It was a clear shot across Rösler's bow, and one immediately joined by Christian Lindner, the FDP state leader in North Rhine-Westphalia and a man with significant influence in the party.

If the FDP manages to eek its way over the 5 percent hurdle on Sunday, Rösler might survive. But if it doesn't, he will almost certainly be pushed out, putting Merkel in the awkward position of facing a cabinet shuffle on the eve of national elections.

The final party whose fate hinges on Sunday's election results are the Pirates. The party, which focuses on Internet and data protection issues, spent much of the last months as the darlings of the German political scene. After its breakout performance in 2011 Berlin city-state elections, the party went on to gain seats in the parliaments of three further states. But the honeymoon would seem to have come to a decisive end. Quarrelling, chaos and an apparent lack of direction have resulted in voters screaming for the exits. Currently, the party is polling a mere 3 percent in Lower Saxony.

Schröder, for his part, was in good form in Osterholz-Scharmbeck on Wednesday. "It is time for a change!" he thundered into the hall as SPD supporters sprang to their feet in applause. Given his party's current malaise, he can only hope that the change comes quickly. 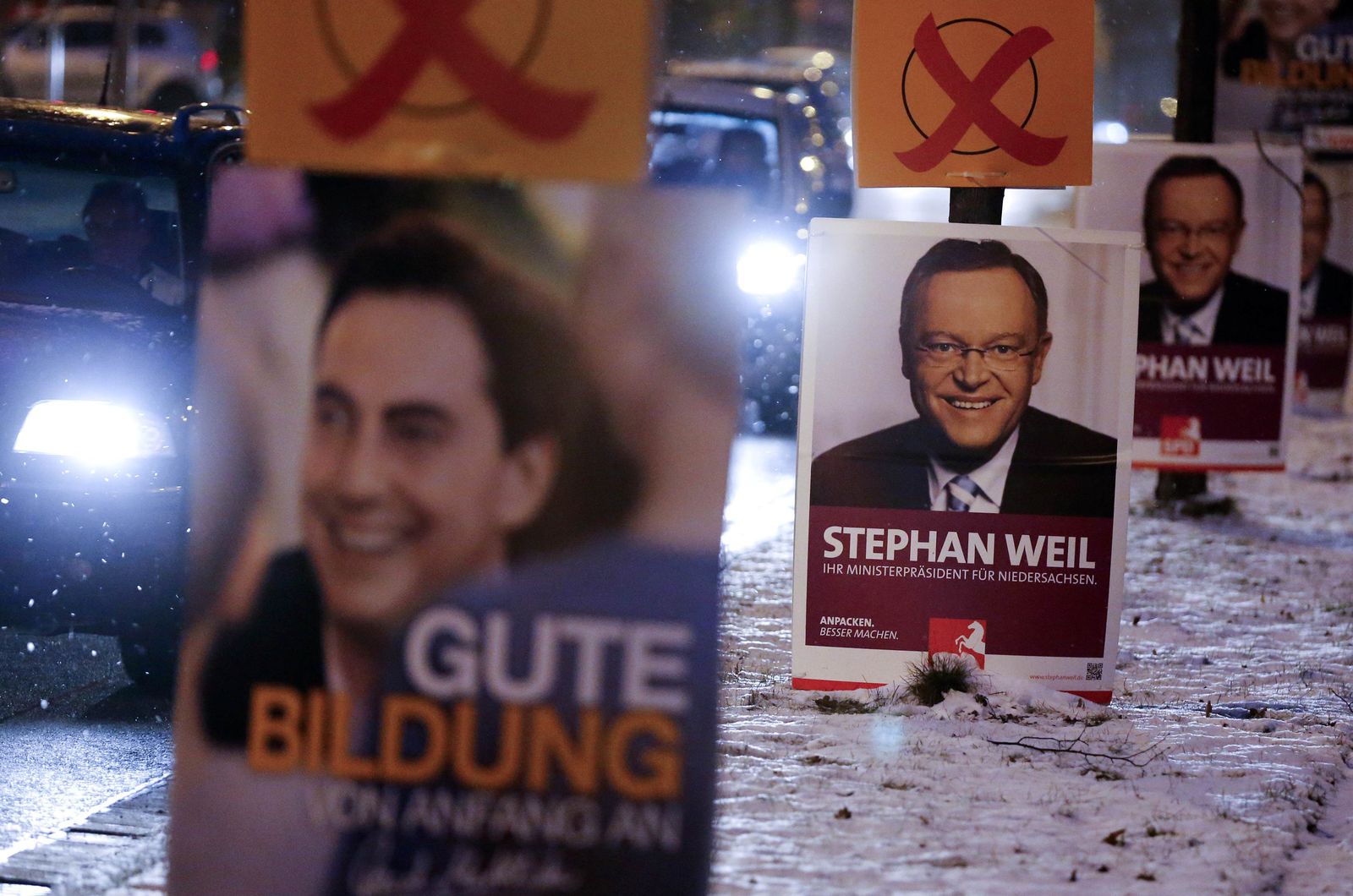 Elections in Lower Saxony this Sunday will have a profound impact on national politics.