The year was nearly over, and it hadn't been a bad one, when Lufthansa's CEO penned a letter to his staff in mid-December 2011. "I wish you and your families a restful holiday and a wonderful New Year," Christoph Franz wrote to Lufthansa's more than 100,000 employees worldwide.

But he also had less pleasant tidings for his workforce. Regrettably, the airline had to implement another "group-wide plan for improving results," the Christmas message announced. It was, he claimed, the only way Lufthansa could remain profitable. Further details would be announced in the following three months. He then dismissed his duly unnerved employees for the holidays.

The long-term effects of this unfortunately worded letter were plain to see at Germany's six busiest airports last Friday. Because the "Score" savings program announced in December also foresaw massively downsizing cabin crew numbers, outraged flight attendants went on strike, causing the cancellation of half of Lufthansa's flights ahead of a holiday weekend in the southern German states of Bavaria and Baden-Württemberg.

Franz criticized the work stoppage, calling it "totally disproportionate" and suggesting it had come "out of the blue." But this only showed how Lufthansa's boss misunderstands the sentiments within his own airline.

A Declaration of War

Officially, delegates from the UFO union representing cabin crew members are only negotiating with Lufthansa personnel managers about their demands for a 5 percent wage increase or profit-sharing following the expiration of the collective bargaining agreement for the important group of employees.

But in reality, the dispute is about much more. The airline wants long-serving and newly-hired flight attendants to move up the pay scale much more slowly than in the past, and to impose a cap on the maximum attainable salary for new staff. At the same time, the Lufthansa board wants to shed its consistently loss-making European routes from airports other than its major hubs in Frankfurt and Munich, folding them into a new company based on Lufthansa's low-cost Germanwings subsidiary. This company would pay cabin crews up to 40 percent less than they earned while at Lufthansa. In UFO's view, that amounts to a declaration of war.

The positions were therefore accordingly entrenched last Friday, although signs of a potential compromise increased as the day wore on. In addition to the aforementioned wage increase, UFO leader Nicoley Baublies hopes the current conflict will also result in agreement on better pay and conditions at the planned budget airline in order to stave off in-house price competition at Lufthansa. But he can't say this officially because the strike could be retroactively declared illegal, resulting in fines for his union.

By contrast, CEO Franz and his fellow executive board member in charge of Lufthansa's passenger business, Carsten Spohr, hope to save triple-digit millions on cabin crew alone to recoup the losses on the carrier's European flights and remain competitive with no-frills carriers like Ryanair and Easyjet and up-and-coming Arab airlines. In all, they want to slash the company's costs sustainably by €1.5 billion ($1.9 billion) by the end of 2014.

The current situation at Lufthansa Passage, the business unit that handles passenger traffic, seems to support these plans. In the first six months of 2012, the unit generated losses of €300 million on ticket sales, twice as much as in the previous year. Fortunately for Lufthansa, its overall results were still reasonable thanks in part to its service and maintenance unit and affiliate Swiss International Air Lines.

The company's first large-scale strike by cabin crew coincided with leaks of figures that showed just how generous the salaries of Lufthansa cabin crewmembers allegedly are. Indeed, long-serving cabin crew chiefs -- known as pursers -- can earn as much as €7,000 a month (including all bonuses), significantly more than their colleagues in other countries.

This in turn affects the proportion of total expenditures accounted for by personnel costs. At Lufthansa, it's no less than 22 percent. Budget airlines like Ryanair get by with just 10 percent. Personnel costs undoubtedly account for a similarly low proportion in the aggressive Arab airlines, which have another advantage over Lufthansa in that they don't have to pay social security contributions for their staff.

Insiders estimate that the German carrier's approximately 18,000 flight attendants cost the company about €900 million a year. A similar amount is spent on its more than 4,600 pilots.

It's understandable that Lufthansa's managers want to make the airline more cost-effective, cutting personnel costs in particular. Their approach, however, is harder to defend.

As early as the start of the year -- shortly after Franz's Christmas missive -- rumors started circulating about what the "Score" cost-cutting scheme might bring. Jokers suggested the name of the program was an acronym for "Stay Cool Or Retire Early."

In their hour of need and with the blessing of Jürgen Weber, the then still powerful supervisory board chairman, Lufthansa's directors decided that the head of their passenger business should champion their cause. After all, Carsten Spohr is much more popular than Christoph Franz, who is considered aloof and more of a technocrat. Spohr, on the other hand, was an Airbus captain until a few years ago, and makes no bones about his appreciation of cabin crews. At internal events, Spohr has repeatedly praised Lufthansa flight attendants as the carrier's "best advertisement," claiming they are far superior to their colleagues at other airlines in manner and appearance.

It seems that the company's hawkish executives, who include CEO Franz, clearly think otherwise. Despite fierce opposition from UFO, they hired cheap temporary subcontractors in an attempt to prevent falling behind Lufthansa's already weakened rival, Air Berlin, in the German capital. But in so doing, Lufthansa inadvertently provoked the wrath of its own employees.

"We couldn't have hoped for a better boost for our strike," says a high-ranking member of UFO. "It was a real bombshell that helped mobilize our colleagues."

At the end of last week, Lufthansa agreed to arbitration. Even so, it insists it will only talk about wages.

For his part, Spohr entrenched himself as the darling of the cabin crews when he announced the good news on Friday that the experiment with temporary contractors in Berlin had been axed.

The UFO boss Baublies and his union colleagues would love to use the forthcoming negotiations to discuss the planned budget airline under the Germanwings umbrella, even if it isn't strictly on the agenda. That's why they want to suggest mediation talks to be held in parallel to the arbitration, just as was the case with the controversy over the construction of a third runway at Frankfurt Airport. This would be more non-committal and enable both sides to save face without sacrificing their own legal position. The union wants to avoid further strikes.

It also seems to have a candidate in mind for the delicate task of mediating negotiations with the airline: Former German President Horst Köhler. Many years ago, the former International Monetary Fund manager helped Lufthansa get a foothold in far-away Nigeria. Now he could also help the airline closer to home. 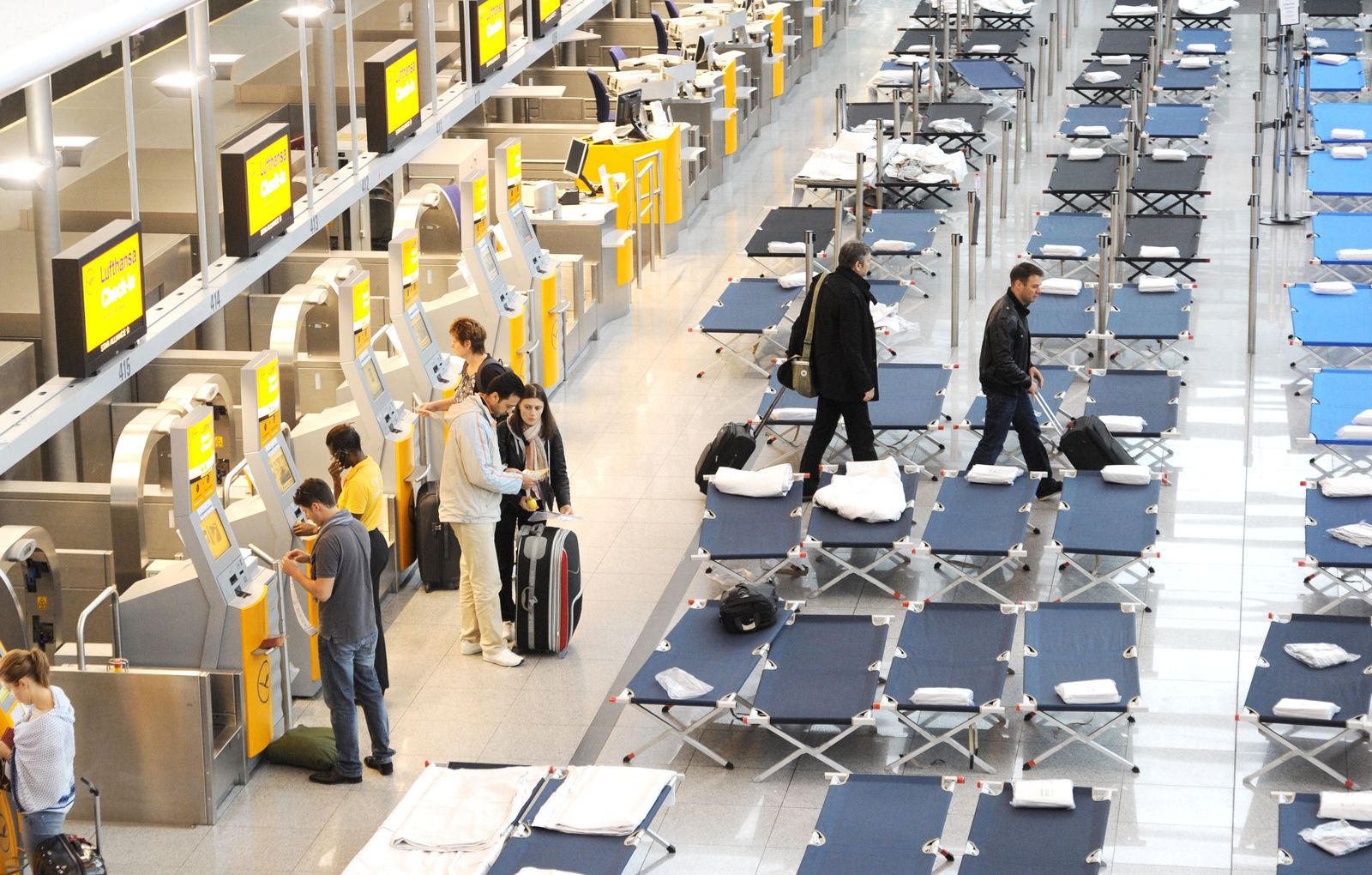 Lufthansa passengers check in for flights in Munich amid cots set up for those stranded by the cabin crew strike.