Sun-worshipping German travellers, with a notorious reputation for reserving deck chairs with their towels on the sandy beaches of Mallorca and Ibiza, will be pleased to hear that Lufthansa has come up with a new idea to prevent holiday gloom triggered by drizzly surprises.

The airline, which is Germany's biggest, is giving passengers the chance to purchase a special "sunshine tickets" to 36 different destinations, including Barcelona, Rome and Malaga as well as New York, Tel Aviv and Johannesburg. 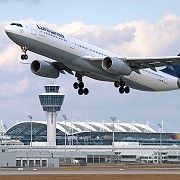 Rain will no longer put a dampener on holidays.

If the passenger's vacation is ruined by dark clouds and lashing rain, the airline will pay them compensation. Customers will be able to claim €20 for each rainy day of the holiday.

Although the maximum amount of money that can be reclaimed is €200 per person, return ticket prices to destinations in Europe start at just over €100, meaning that customers could theoretically reclaim the entire cost of the ticket if the weather turns out to be truely dire.

"If an eagerly-awaited sunny escape is spoiled by rain, €20 in compensation per rainy day may be able to brighten up your mood a little," Lufthansa said in a press release issued on Wednesday.

The carrier has been grappling with falling passenger numbers since the financial crisis struck last year, stung by low-budget airlines Easyjet and Air Berlin which have boosted their passenger numbers thanks to companies increasingly opting for the low-budget option instead of business travel, as well as passengers generally becoming more cash conscious. Lufthansa transported almost 6 percent fewer passengers in the first half of this year, compared to the same period in 2008.

Big package tour operators -- like Thomas Cook and TUI -- have traditionally been popular amongst German families travelling to Turkey, Spain and Greece, but have been forced to rethink their business models since being hit by the worst economic recession in decades. Now train trips to bordering countries or even within Germany are increasingly replacing long-haul holiday to warmer climes.

Although Lufthansa's sunshine-insurance is unprecedented, other airlines have come up with some less popular ideas to cut costs to boost business. Irish airline Ryanair's chief executive Michael O'Leary was believed to have toyed with the ideas of charging passengers to use the toilet, and British Airways is only one of a number of airlines to stop offering hot meals onboard.

To get the bad-weather cash, passengers must send their ticket receipt, boarding card and a list of days when it rained to the airline within four weeks of returning from their vacation. They will then be paid for each day on which more than five millimeters of rain fell per square meter. The deal is limited to economy-class tickets for flights between Sept. 1 and Oct. 31 of this year.