Behind the black curtain, next to the Freddy Mercury cubicle, political history is being made. The German Pirate Party is holding its first nominating convention in the state ever, here at Monster Ronson's Itchiban Karaoke bar in the middle of Berlin's trendy Friedrichshain district, where it managed to attract 3.4 percent of the votes during the recent European Parliamentary elections. And that was without putting up a single poster. Clearly a high point. And now, at the state conference, the pirates are plotting as to how they can take lasting advantage of their surprise victory. 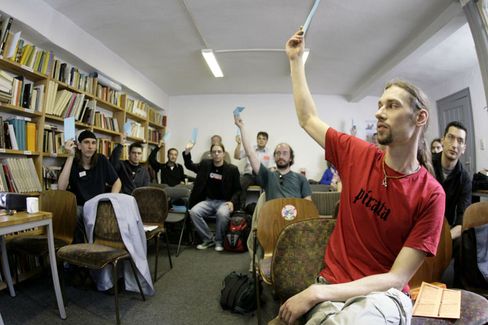 The German Pirate Party is fast growing in popularity.

The German Pirate Party was formed at the end of 2006 with similar principles to the original, and better known, Swedish Pirate Party. In Sweden the pirates make up the third largest independent party outside their parliament -- they campaign for copyright law reform and individual privacy. In 2008 the German version became the second Pirate Party to contest a state election (in Hesse) and last month they managed to get over 0.9 per cent of votes in the European Union parliamentary elections.

"The European elections were the tipping point," says media-liaison-pirate Fabio Reinhardt. Indeed, it has helped stir up a storm of interest in the party. Since June 9, their membership has tripled, rising to 3,200. And there are more would-be pirates signing up daily. A recent debate over Internet controls in Germany -- sparked by legislation against child pornography -- has put even more wind in the pirates' sails.

The T-shirt-clad politicians' main party platform is an Internet that is no longer entirely free. They are standing for the rights of Netizens in the information age and fighting against censorship -- and for music downloads you have to pay for.

"Is Mr. Mey here? And would he like a ballot?," one pirate asks, holding up a white notebook at the meeting on this Wednesday. Next to the handwritten names is the bold signature of the general secretary. Becoming a real political party is not child's play. Even if the Pirates do hate titles like "district party committee," preferring to use descriptions like "crew" or "squad" instead.

"Just make sure it's not too uptight," Aaron Koenig exhorts. At 45, he's probably the oldest person in the room. And, he suggests, after three weeks of membership he is already an experienced Pirate. Somehow you get the feeling he's right.

In everyday life, Koenig works in the media. Every year he organizes the Bitfilm Festival (an international, online festival of digital film and animation -- SPIEGEL ONLINE is one of the event's media partners) and he says that he has been professionally involved with the Internet since 1994. "I don't want to leave the Internet to a bunch of politicians who only know what it is because their secretaries once printed out a page from a Web site for them."

Koenig is the founder of the first German pirate crew. They were named after Konrad Zuse, the Berlin-born engineer credited with inventing one of the world's first computers. The idea was that pirate crews of five to nine people would come together to make decisions consensually. And if one more person came along, bringing the number to 10, then a new pirate crew would be formed. Just like cell division, Koenig explains.

But then shortly before the most important decision of the evening is to be made there is a disturbance. A good time-guerrilla takes over the stage, occupying the sofa behind the stripper's pole that's usually used by the club's go-go dancers. It's a member of the "Berg Party," a left-leaning network of creative types who advocate for the non-commercial use of Berlin's public spaces and whose name comes from the city's various creative, inner city districts -- Kreuzberg, Prenzlauer Berg, Schöneberg and so on. They've brought a gift along for the pirates.

Berg Party activist Hauke Stiewe hands over a dead fish wrapped in newspaper. The donation is meant to symbolize an annual tradition, a water fight held every September on a nearby bridge, where two neighbouring districts -- Friedrichshain and Kreuzberg -- engage in a mock battle.

Andreas Baum, the 32-year-old chairman of Berlin's Pirate Party, unwraps the fish and promptly throws it against the nearest wall. For most of the Pirate's conference a little pile of fish bones and guts will just lie there. At which stage the party leaders make an executive decision: the chairman is going to have to clean that up himself. Because after all, this isn't just about having a good time -- politics is also about duty and responsibility.

After the fish incident, the conversation turns back to more practical matters surprisingly quickly. The main issue at hand is whether this fashionable party should try and put forward a direct candidate in the city-state for the upcoming federal elections.

"If we put on an election campaign, we will increase motivation," argue those who are in favor of putting up a direct Pirate Party candidate. Florian Bischof, who is the leading candidate on the party's state list, says he is ready to step into that role. But in the Pirate Party's electoral stronghold of Friedrichshain-Kreuzberg, the pirates would be facing some serious opposition: Hans-Christian Ströbele, a member of the Green Party. Ströbele was the first Green Party member ever to be directly elected to the German parliament and he is also one of that party's foremost parliamentary speakers. Challenge venerable Ströbele? Many of the Pirates are opposed to the idea.

The issue comes to a vote. Twenty hands are raised -- they're for putting their own direct candidate up. But 22 pirates are happy to go into the election campaigns without a "captain." The results are in and there are cheers from the beer-soaked back benches in the karaoke bar.

It is a defeat for the "established" members of the Pirate Party -- but at the same time it's a refreshing demonstration of democracy in action. During Germany's general election this September, the Pirate Party will concentrate on increasing their party vote, making their way into parliament like that. For tonight, the decision means that the rest of the agenda has become irrelevant. And anyway, there's rum waiting at the bar.