DER SPIEGEL: What does the concept of home mean to you?

Weber: Security. And the peace of mind that comes with completely understanding your surroundings because you've known them for so long. It is a feeling of certainty that you belong to that place. In an era of enormous change, this sense of home is particularly important to people.

DER SPIEGEL: As part of your effort to become the lead candidate for the center-right European People's Party (EPP) in the upcoming European Parliament elections, you made a film that shows you almost exclusively in your Bavarian hometown of Wildenberg -- going to church, speaking with senior citizens and playing guitar in a band. What message are you trying to send to voters from elsewhere in Europe, like Sicily or Warsaw?

Weber: The message is quite simple: Even EU politicians like myself know where our roots lie. We know the concerns people have and are proud of where we come from.

DER SPIEGEL: You have spent the majority of your professional life in Brussels. Has the EU capital become a home to you?

Weber: No, Brussels isn't home for me. But I do have a strong feeling of home for the entire Continent. This is a feeling that I would like to awaken among European citizens: that Europe protects us and sustains us.

DER SPIEGEL: Can the idea of home cross borders like that? For most people, the word home likely refers to their immediate surroundings and not an entire continent.

Weber: I wouldn't be so sure about that. There is such a thing as a European way of life. It describes our foundation, the values and rules that nobody questions: rule of law, democracy, an independent media, the social market economy and the equality of men and women. All of those things are seen essentially the same way in Sweden as they are in the Czech Republic.

DER SPIEGEL: The risk, though, is that the populists will used the concept of home to exclude people with foreign roots.

Weber: That is precisely the difference between us and the right-wing firebrands. Being Bavarian, German and European -- for people like Marine Le Pen or Matteo Salvini, that is contradictory, but for me, they belong together. As such, voters can choose between two extremely different models on May 26.

DER SPIEGEL: Before you start pointing fingers at others, it is worth noting that you have such a firebrand in your own ranks. The Christian Social Union (CSU) in Bavaria, to which you belong, and its sister party, the Christian Democratic Union (CDU), are both part of the EPP group, as is Viktor Orbán's Fidesz party. And he isn't shy about fomenting against migrants in his home country of Hungary.

Weber: Viktor Orbán is following the wrong political path. Particularly when it comes to style or fundamental questions about the democratic order, he exhibits similarities with Lega head Salvini and PiS leader Jaroslaw Kaczynski. That isn't a path I pursue, nor does the EPP.

DER SPIEGEL: After his attacks on European Commission President Jean-Claude Juncker, who is also a member of the EPP, you warned Orbán that he is increasingly distancing himself from the center-right group. Will the CDU and CSU petition for the exclusion of Orbán's Fidesz from the EPP?

Weber: With his comments and his poster campaign (Eds. Note: Orbán's party recently produced posters claiming that Juncker and George Soros want to promote illegal immigration to Hungary), Orbán badly damaged the EPP. That is why I expect him to apologize and put an end to the poster campaign. Beyond that, we cannot simply return to business as usual. It has reached a new level; appeals are no longer sufficient. We will take concrete steps very soon.

DER SPIEGEL: Again: Some EPP member parties want to petition for the removal of Fidesz as soon as possible. Will you support that effort?

Weber: All options are on the table. We are currently discussing the issue within the EPP. There will be decisions for how we want to continue with Viktor Orbán. I will be making proposals.

DER SPIEGEL: Viktor Orbán has repeatedly made it clear that he doesn't intend to leave the EPP on his own.

Weber: I am the EPP lead candidate and it is up to me and the EPP leadership team to determine our campaign strategy, not Orbán. It is about the EPP's understanding of politics. Viktor Orbán's approach is a weak one. Instead of positively advocating on behalf of his own proposals, he prefers scaremongering.

DER SPIEGEL: You personally voted in European Parliament in favor of a so-called rule-of-law procedure against Hungary in accordance with Article 7 of the European Union treaty. But others from your CSU party chose not to join you, even though you are floor leader for the party. Do you lack authority?

Weber: Without my decision to allow the vote to go ahead and to vote in favor of the rule of law procedure myself, there would not have been a majority. The EPP was prepared to take significant steps against a member of its own group. I would like to see the Social Democrats and the Liberals do the same, for example when it comes to the corruption-plagued social-liberal government in Romania.

DER SPIEGEL: Still, Orbán has plenty of supporters within the CSU. Party-member Hans-Peter Friedrich, a vice president of the German parliament in Berlin, even sided with Orbán in the conflict with Juncker.

Weber: The EPP is the party of Konrad Adenauer and Robert Schuman, of Europe's founding fathers, and of Helmut Kohl. I am grateful that a large majority supports my course, including Austrian Chancellor Sebastian Kurz, for example. There has been a fundamental change in the handling of Orbán. Enough is enough. That is our message.

DER SPIEGEL: In order to implement concrete sanctions against Hungary, however, you would need the agreement of all EU member states. Does the EU need more flexible instruments for responding to countries that turn their backs on joint European values?

Weber: In the EU, we unfortunately have a more fundamental problem with defending our common values. It's about Poland, Romania, Malta and, yes, Hungary. We do indeed lack instruments. Ever since the euro crisis, we take a close look every year, within the framework of the European Semester, to see if the numbers in all member states are healthy. But we don't have a comparable instrument for values, no neutral evaluation mechanism for the question as to whether a country is adhering to the rule of law. That is why I will be presenting a draft for such an instrument ahead of the European election.

DER SPIEGEL: What are you envisioning?

Weber: I am thinking of a panel that can expertly and neutrally determine where there are problems with the rule of law. As European Commission president, I would oblige myself to refer cases where violations have been found to the European Court of Justice.

DER SPIEGEL: European Budget Commissioner Günther Oettinger has proposed cutting off European Union funds for countries found to be in violation of rule-of-law standards. Is that something that should be considered?

Weber: We have to talk about sanctions. Certainly.

DER SPIEGEL: The most objectionable part of Orbán's campaign isn't just the attacks on Commission President Juncker, but primarily the fact that the posters targeting the U.S. investor George Soros have a distinctly anti-Semitic subtext. What are you doing about that?

Weber: The developments across Europe are shocking. Anti-Semitism is returning with a bang. One out of 20 Europeans has no idea that the Holocaust took place. That is why I am proposing that every schoolchild visit Auschwitz or another concentration camp at least once during their time in school. Second, we need a joint definition of anti-Semitism. Only then can we begin working toward European laws to, for example, force internet companies to remove anti-Semitic content from the web. In addition, Europol should be given a new mandate that would allow it to better pursue anti-Semitism on the internet.

DER SPIEGEL: Did the arrival of hundreds of thousands of Muslims in the European Union exacerbate anti-Semitism, as politicians from the right-wing populist party Alternative for Germany (AfD) claim?

Weber: First of all, we are seeing rapidly growing anti-Semitism on the right. But there is also left-wing anti-Semitism. Just recall how Charlotte Knobloch, head of the Israeli Culture Association in Munich, recently denounced in the European Parliament the fact that anti-Semitism is possible in Jeremy Corbyn's Labour Party. But the third source is clearly the Muslim sphere.

DER SPIEGEL: That is hardly consistent with the idea of a European Islam.

Weber: Thus far, the development of a European Islam rooted in our fundamental values has not been successful. That shouldn't come as a surprise, as long as many Muslim communities in the EU continue to be funded from overseas or bring in imams from abroad. We have to know where this money is coming from and, if necessary, prohibit it.

DER SPIEGEL: You have said the upcoming EU election is vital in countering the populists. How great is the risk that a strong right-wing block could paralyze European Parliament?

Weber: The idea that populists on the right and left could become stronger in European Parliament is one I find extremely concerning. Brexit shows what happens if you follow the simplistic answers presented by populists. Those who listen to the AfD and the Left Party will end up with a situation in Berlin like the one in London.

DER SPIEGEL: In Britain, voters may be given the opportunity to reverse the Brexit decision. Are you in favor of a second referendum?

Weber: I welcome anything that promotes clarity in London. A referendum could be one path for resolving the current stalemate. But that is a decision that the British must make for themselves.

DER SPIEGEL: If Prime Minister Theresa May asks for a postponement of Brexit, which is currently set to take place at the end of March, do you think the EU should grant that request?

Weber: We have been negotiating with Britain for almost three years and we have hardly made any progress. As such, I have little sympathy for a postponement without a clear goal, one that would simply prolong the chaos in London. If we are not provided with a clear declaration regarding what precisely should happen during a Brexit extension, we will not give our consent. I can only imagine a short extension if Ms. May is able to get the Brexit agreement through parliament and then needs a few weeks for the technical implementation.

DER SPIEGEL: If the British are to remain in the EU beyond the end of June, they would have to take part in the European election in May.

Weber: The participation of British voters in the European election is inconceivable to me. I can't explain to people in Germany or Spain that people who want to leave the EU should be given a last opportunity to exert influence over its future. The EU has to reform its bodies, limit migration, face up to the challenges presented by Donald Trump, perhaps even a trade conflict. In such a situation, I can't allow the British tragedy to infect the rest of the EU and ultimately boost the populists.

DER SPIEGEL: If you want to become Commission president, the election result here in your home state is also important. If the public opinion polls are to be believed, then the CSU could end up with a vote total that is even worse than the historically dire result it received in the 2014 European election. Is that a threat to your chances?

Weber: The result I should be measured against is that from the last Bavarian state election. It is clearly apparent that May 26 isn't just about the European election, but also about the question as to whether the CDU and CSU will remain big-tent parties.

DER SPIEGEL: Mr. Weber, thank you very much for this interview. 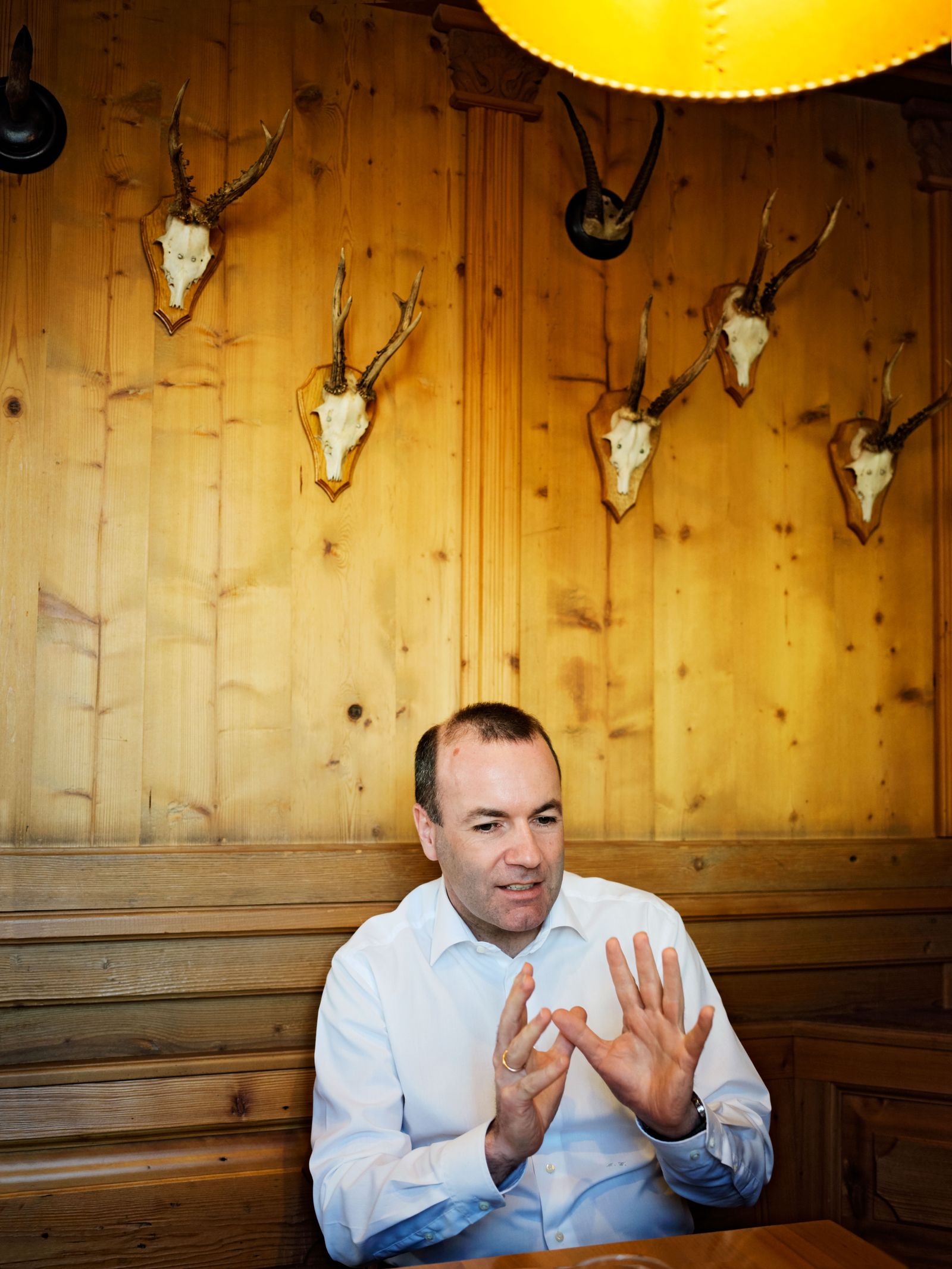