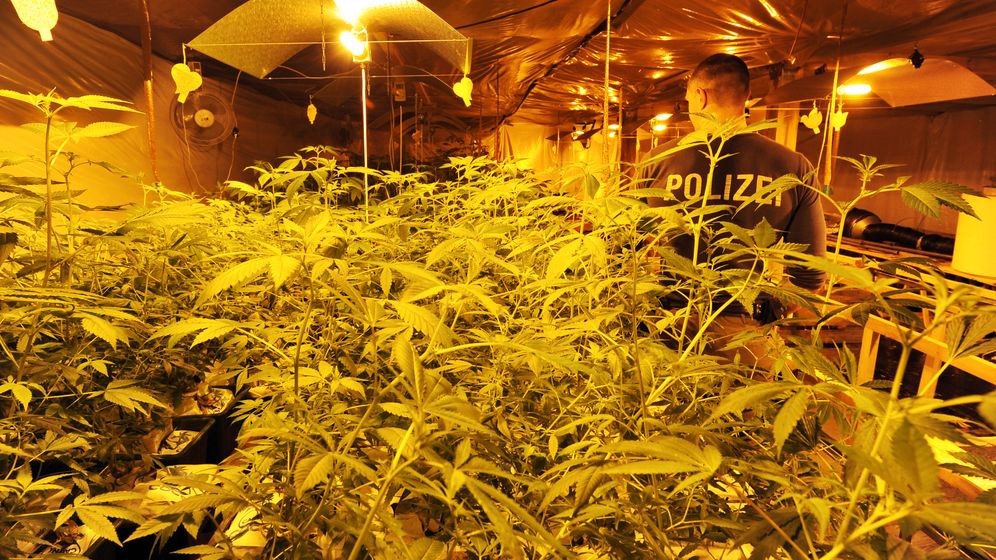 Police Commissioner Marco Stein chose the parking lot on Highway 102, near the city of Brandenburg in eastern Germany, at random. His task was a routine traffic check, making sure that passing cars were carrying a vehicle registration and a first aid kit in the trunk.

It looked to be a routine day of police work. But Stein and his colleagues had only waved down the first few cars when they began to notice the sweetish scent of cannabis. For the most part, there were only mothers with their children in the cars they pulled over -- the odor must have been coming from somewhere else. The commissioner took a look around, peering at a nearby hall that once belonged to a construction supply shop and a neighboring fast food stand. The neighbor's German shepherd growled behind a hedge, but there was nothing else around.

The hall's doors were made of corrugated metal and covered with thick metal bars. The windows were taped over with opaque sheeting. But when Stein, 36, approached a ventilation pipe, any remaining doubts he might have had quickly vanished. He alerted his superiors.

Two hours later, equipped with a search warrant, the commissioner and his colleagues from the criminal investigation department broke down the doors and found themselves in a sea of lush green. Cannabis sativa plants were lined up neatly, watered by an ingenious system of tubes and thriving under artificial light. The building contained more than 2,500 plants in all, from small shoots to bushes as tall as two meters (6.5 feet).

And no one claimed to have seen anything suspicious -- not the man from the fast food stand, whose tables offered customers a clear view of the main entrance to the illegal cannabis nursery, nor Marcus K., a car dealer who lived next door and owned both the German shepherd and the hall.

Investigators first focused their sights on K.'s 35-year-old tenant and several helpers. But three weeks later, police arrived at K.'s door and confiscated two Porsches, an Aston Martin and 10 motor yachts. The public prosecutor's office suspected the car dealer of purchasing these possessions with drug money. They believed K. and his accomplices had earned at least €824,000 ($990,000) since January 2009 with the marijuana plantation investigators believe belonged to them.

That site in the small village of Fohrde was one of the largest "indoor plantations" to be discovered in Germany to date. It was also part of a lucrative, booming black market -- hardly a week goes by in Germany without police discovering a professional growing site. It happened in Berlin again last Monday, when police discovered around 1,400 harvest-ready plants in an office block right in the middle of Wedding, an urban district of the city.

Marijuana grown in Germany is increasingly edging out imports from countries that until now acted as suppliers, such as Morocco and Afghanistan. Where hippies of the past swore by "black Afghan," today's pot smokers are quite willing to roll German hashish and marijuana in their joints.

Hobby gardeners who grow a few plants in their basements or garden plots for their own use are not the main part of the problem. Authorities such as Germany's Federal Criminal Police Office (BKA) see far more cause for concern in large-scale operations such as the one near Brandenburg, as well as in the business' "organized international structures." Many German marijuana growers have Dutch backers, while those who care for the crops and help with the harvest are often recruited from countries where wages are lower.

The boom in domestic cultivation also means a change in strategy for police. In the past, their main target was drug trafficking. But, increasingly, officials are on the hunt for local marijuana growers and their hidden plantations.

The number of large-scale growing operations discovered -- those with more than 1,000 plants -- increased last year from 18 to 26. Authorities also found 316 small and mid-sized sites with fewer than 1,000 plants. Investigators assume, though, that a considerable number of cases go unreported.

The current phenomenon began in the Netherlands, but the situation there quickly got dangerous for growers. Gang wars sprang up around harvests, distribution channels and markets, and in some cases people were even killed.

Although the Netherlands is world famous for its tolerant policies towards soft drugs and its pot- and hash-selling "coffee shops," the government in The Hague in recent years has cracked down on cannabis growers -- in effect pushing them out of the country, with many Dutch drug gangs setting up shop across the border in neighboring Germany. Those backing the projects evaded authorities by heading over the border, first to the German federal states of North Rhine-Westphalia, Lower Saxony and Schleswig-Holstein, all fairly close to the Netherlands.

But there, too, pressure increased, and more and more producers are now moving further east, toward Brandenburg, Saxony and Saxony-Anhalt, all states that were formerly part of East Germany. With its low population and countless barns and industrial buildings standing empty, eastern Germany appears to offer ideal conditions for marijuana growers and their flourishing greenhouses. This, at least, is how BKA's Marion Gradowski and Bernd Welsch describe it. The two officials maintain a map of Germany specifically indicating marijuana growers' locations.

According to Welsch, who is in charge of investigations relating to cannabis, this eastward expansion is changing the entire German market. Drug cultivators in the west of the country once harvested their crop and brought it back to be processed in the Netherlands, where the plants were dried and fermented. The finished product was then divided up and packed in small plastic bags to be sold, for example, in Dutch coffee shops.

"The further from the Dutch border a plantation is located, the higher the probability that its goods are being produced for the local market," Welsch explains.

It's difficult to estimate what percent of domestic demand German producers are currently fulfilling, given the black market nature of the business. In Great Britain, which has had a flourishing business in homegrown goods for years, local crops dominate the market.

The system's benefits for growers are obvious -- there are next to no transportation costs and there is a lower risk of being discovered. The necessary infrastructure and female seedlings are easy to obtain in the Netherlands and sometimes it's even possible to hire a group of workers who will set up entire greenhouses.

This illegal business model is lucrative too. The initial investment runs between €20,000 and €50,000, depending on the size of the plantation, and that amount can often be earned back in as little as six weeks, when the first harvest is ready. Up to six harvests per year are possible using new plants grown from cuttings, and a flourishing greenhouse yields exorbitant profits. A kilogram (2.2 pounds) of hashish or marijuana fetches from €3,000 to €4,000 on the black market, with street prices approximately twice that amount. A harvest of 1,000 plants can produce around 15 kilograms (33 pounds).

Employees in these operations are often used as both gardeners and guards, and are frequently brought in from other countries for low wages. In the past, they often came from Eastern Europe, but recently authorities have come across Vietnamese workers more frequently This was the case in a January raid in Zossen, near Berlin -- agents stormed a building there that had once belonged to a Communist-era East German collective farm and were met by four Vietnamese gardeners in flip-flops. The results of the raid were 1,400 confiscated plants plus arrest warrants for the gardeners, as well as two presumed backers.

Vietnamese workers also cultivated a professionally run growing facility hidden beneath a nightclub in Hainichen, a town in the eastern German state of Saxony, as well as operations in Leipzig, Neumarkt in Bavaria, Mönchengladbach and Rottendorf, near Würzburg. Globally as well, Vietnamese groups are considered leaders in cultivating and marketing high-grade cannabis. In Canada, the United States and Great Britain, police often bring immigration officials along when they search plantations. Many of the cultivators also worked in agriculture in Vietnam and some are the victims of human traffickers, forced to work off their debt in exchange for the traffickers' services.

Continuous demand from several hundred thousand regular consumers of cannabis in Germany is drawing more and more amateurs and copycats into the business, which has seen a complete commercial infrastructure develop around it. Beginners' grow-your-own sets can be bought online for as little as €29, as well as carbon filters for use against the pervasive smell, irrigation sets and even entire "indoor-use greenhouses." All of it is legal, since the paraphernalia could, theoretically, just as easily be used to grow tomatoes. The Internet also provides everything from scads of growing tips to entire training courses on how to grow especially high-yielding and intoxicating plants from the seeds of that age-old cultivated crop, the hemp plant. Seeds too are easy to obtain online from foreign dealers.

No Longer the 'Soft Drug' Loved By Hippies

Still, investigators warn against trivializing the drug. The trend toward greenhouse cultivation has led to a considerable rise in the plants' potency, BKA expert Gradowski says. "This no longer bears any resemblance to the joints of the hippie era in the 1960s," she adds, saying that marijuana from indoor plantations can no longer even "be considered simply a soft drug."

What's causing authorities concern is precisely the same thing producers and consumers value -- high concentrations of tetrahydrocannabinol (THC). This is the substance that gives users their high when they consume the brownish resin (hashish) or the flowers and leaves (marijuana) of the cannabis plant.

THC levels also play a decisive role in legal proceedings and sentences for those discovered cultivating the plant. The rule of thumb is that the higher the THC concentration and the larger the quantity of plants, the harsher the sentence will be. And the sentences can be severe. A marijuana grower in Mönchengladbach in western Germany landed himself four and half years in prison in early May, while the operators of the largest growing operation in the state of Baden-Württemberg, in southern Germany, received six and a half and seven years respectively. The son of a family that has established a scrap metal dynasty in North Rhine-Westphalia even ended up with a nine-year sentence.

When a plantation comes to light, agents generally show up with their own trucks and later their colleagues even take over the cultivators' work, drying the plants and allowing them to ferment. Only then is it possible to inform public prosecutors as to the THC-content of the find. The consumption-ready goods are then destroyed.

Agents are now well equipped in their search for hidden plantations. In the case of Zossen, police received a tip-off and sent a helicopter with an infrared camera on a low-altitude flight over the region. The radiation of the lamps in the greenhouse gave away its location. Word seems to have gotten around since about the tactic and some growers have started to invest in costly heat insulation.

Drug cultivators' high energy demand often makes them suspicious as well. Just 100 of the 600-watt sodium vapor lamps growers often use consume as much electricity in a day as an average family does in half a year. Some operators employ their own generators in order to keep from attracting notice with high electricity bills, or they tap power lines illegally.

But that strategy also poses risks. Cannabis growers in Heidenrod, a town in western Germany, were using an old battery factory for botanical purposes when they caused a power outage in the neighborhood. And a power grid failure in Rottendorf, Bavaria, seemed inexplicable at first -- until it turned out a cannabis greenhouse had overloaded the system with 40 large fans and about 280 special lamps.

In both cases, police showed up at the door not long after the power outage.