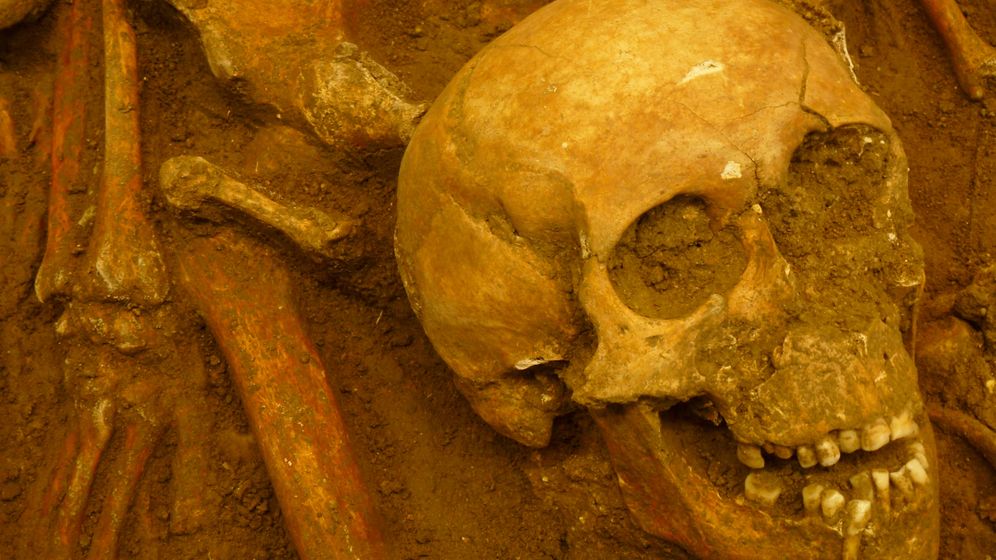 Photo Gallery: Who Died in the Battle of Lützen?

The morning of November 16, 1632 was foggy, so the mass killing could only begin after some delay. It wasn't until midday that the mist cleared, finally allowing the Protestant army of Sweden's King Gustav II Adolf to attack the Roman Catholic Habsburg imperial army led by Albrecht von Wallenstein. The slaughter lasted for hours in the field at the Saxon town of Lützen.

"In this battle the only rule that applied was, 'him or me,'" says Maik Reichel. "It was better to stab your opponent one extra time just to ensure there was no chance of him standing up again." The historian und former German parliamentarian for the center-left Social Democratic Party (SPD) is standing at the edge of a field on the outskirts of Lützen. After the battles here, the ground was soaked with blood. "About 20,000 men fought on each side and between 6,000 and 9,000 were killed," estimates Reichel, who heads the museum in the city castle.

When the soldiers in the religious war clashed on the outskirts of Lützen, the road from there to Leipzig was not yet called "B 87," but "Via Regia." The Red Cross nursing home and nearby supermarket that now stand on the battle site also didn't exist back then. But the past is present here when one goes looking for it. So far archaeologists have examined about one- third of the former battlefield, in total 1.1 million square meters (11.8 million square feet). Theoretically, only another one-third could still be examined. The rest has been covered by the nursing home, supermarket and small garden allotments.

Still, archaeologists have managed to recover thousands of objects from the battle. The top find was just recently discovered: a mass grave where victims of the brutal struggle were buried. It is likely one of dozens, perhaps hundreds, of similar graves. Systematic excavations helped researchers locate the dead soldiers, and recovery efforts between the street and blooming rapeseed plants have left the ground bare.

The Human Dimensions of War

The bloody battle at Lützen isn't known for its military significance. There was actually no clear winner. Instead it's famous for the death of Sweden's King Gustav II Adolf, also commonly known as Gustavus Adolphus. But the dead piled up all the same. Archaeologists are especially interested in the up to 175 unlucky soldiers buried in this mass grave. Because their work is better accomplished in a laboratory rather than a field, a complete chunk of soil was unearthed and transported to the city of Halle with the help of cranes and flatbed trucks. The 55-ton hunk of earth, split into two pieces for logistical reasons, is laced with bones that are now being analyzed in the laboratory of the Saxony-Anhalt State Office for Heritage Management and Archaeology. A wooden casing ensures that the discovery doesn't crumble.

Not much is known about the battle's dead. Mercenaries from Scotland, England and Croatia fought next to Germans, Austrians and Swedes. They died from wounds inflicted by muskets, pistols, swords, knives and halberds, which are pole weapons with axe blades mounted on top. But who were these fighters? Were they spring chickens or old warhorses? Were they well-fed or emaciated? And where did they come from?

These are questions that will be answered by the analysis in Halle, about a 45-minute drive from Lützen. Visitors to this bright, lofty laboratory can get some idea of the human dimensions of the battle by climbing a ladder onto the frame encasing the two soil blocks.

Heiko Heilmann is already up there, scraping soil away from a bone with a wooden spatula. In his hands the dirt gives way to reveal the remarkably well-preserved skeleton of a former fighter. The excavation technician has already uncovered 20 bodies from the first of the two blocks.

He starts the job by moistening the soil with a spray bottle. Then he carefully digs out the bones. The sight of the arms, legs, shoulders, pelvises and skulls is hard to take in. Loose bones are collected in aluminum trays. Little labels give the deceased provisional names such as "I1," "I2," I3," with the "I" standing for individual.

A few facts have already come to light. For example, the corpses were buried almost naked, presumably after being plundered. They were, at least, carefully laid to rest. The bodies were gathered from the battlefield and placed in a grave next to the street, arranged in two rows with their legs facing each other.

Several layers of dead probably lie within these two blocks, although researchers have only uncovered the first. The burials were not taken care of by the surviving soldiers, who were already on their way to the next battle. Instead the good citizens of Lützen had to take on the unpleasant job. They asked 200 soldiers in the neighboring garrison of Weissenfels for extra support.

The discovery at Lützen, being prepared by Heilmann with dental tools and brushes, is not unique, though. Researchers know of more mass graves in Germany from the Thirty Years' War. They have been found during the construction of a house in Höchstadt in central Franconia in 1985, excavated by a gravel dredge in Wittstock in Brandenburg in 2007 and exposed by pipeline engineers in Alerheim in southwest Germany in 2008. The grave at Wittstock has recently been put on display at the State Archaeological Museum in Brandenburg an der Havel.

But the grave at Lützen is an especially systematic and successful investigation, and its scientific results promise to be comprehensive, even though the work is still in its infancy. The skull of "I9", for example, shows clear traces of a blow. A lead bullet is lodged in the pelvis of "I2" from a shot to the buttocks. A strontium isotope analysis will uncover whether it was a Saxon, Swede or Scotsman that had to suffer that particular misfortune.

The analysis will likely be conducted by researchers from the Bristol University. The British specialists have already helped their German colleagues when the tomb of medieval Queen Edith was opened in Magdeburg in 2009. The procedure works like this: People in differing regions of the world are exposed to characteristic chemical forms of the metal strontium. Because the different isotopes of the element are integrated into the human body, they leave telltale signatures. With a little luck scientists can examine the bones to reconstruct where soldiers traveled in the years before their death. Teeth reveal information about their childhoods.

Anthropologists, chemists, historians, soil and weapons experts will conduct a joint analysis in the coming months. "We always work with other disciplines. Old school archaeology is out," says Alfred Reichenberger, spokesman for the Saxony-Anhalt State Office for Heritage Management and Archaeology. The work will take a long time, that much is clear. But at some point there might be a visitor's center at the edge of the former battlefield, says Reichel, head of the Lützen museum.

The center will report on the horrors of the war and serve as a warning for today's generation. Because, as Reichel adds: "History doesn't repeat itself. But it has its habits."

23 Bilder Photo Gallery: Who Died in the Battle of Lützen? 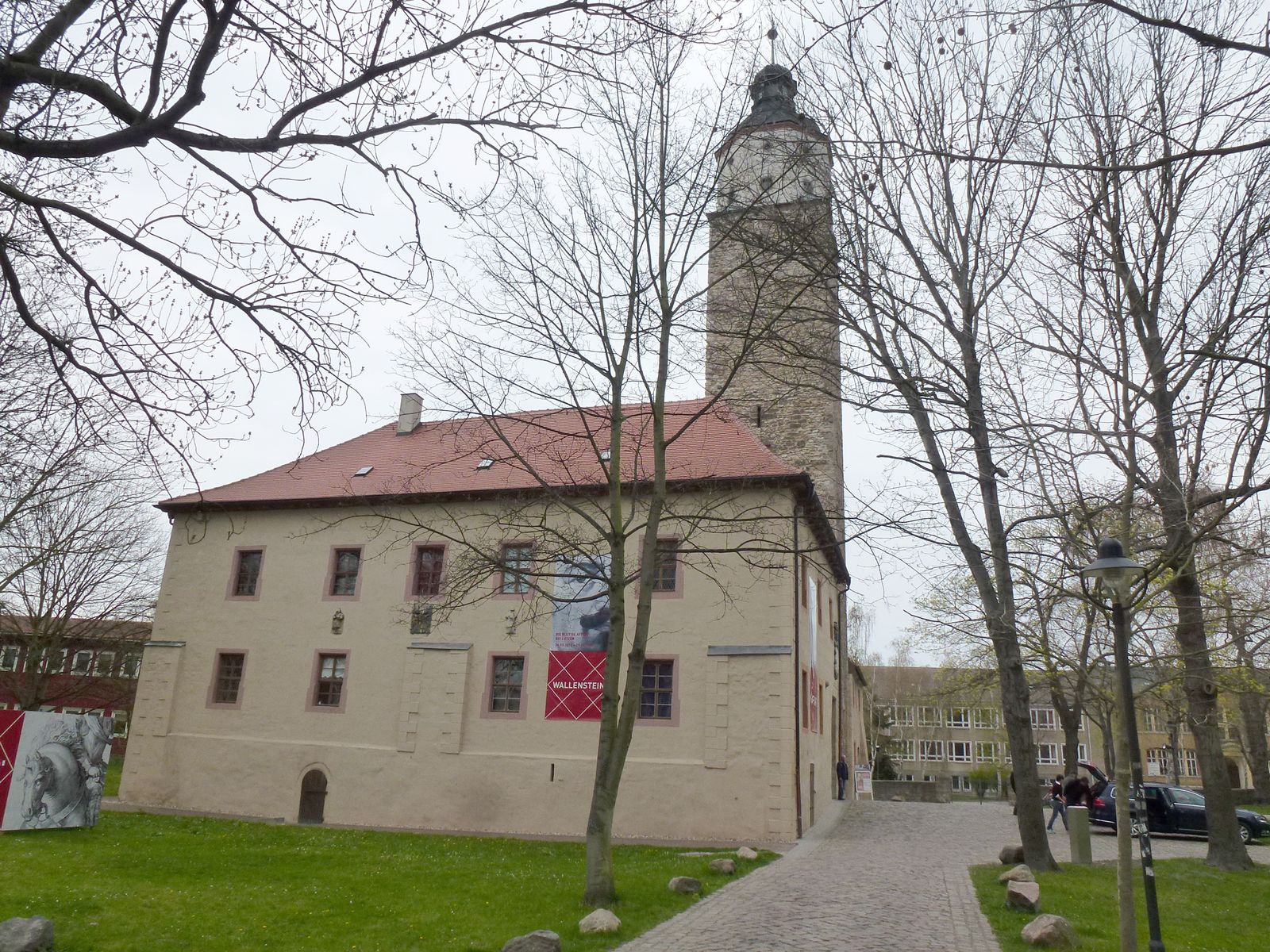 The castle at Lützen: An exhibit called the "Bloody Affair at Lützen: Wallenstein's Turning Point," devoted to the life of Albrecht von Wallenstein will be on display until July 29, 2012. The exhibit will show recent pictures of the examinations of mass graves at state agency laboratory.