Officials at Germany's central bank, the Bundesbank, will be breathing a sigh of relief Friday at the news that their most inconvenient employee is leaving to pursue alternative career opportunities. In what appears at first glance to be a deal designed to save face for all concerned, the provocative Islam critic Thilo Sarrazin, whose new book has sparked a heated debate on immigration in Germany, has decided to voluntarily leave his post on the Bundesbank board.

"With a view to the public discussion, the parties involved have agreed to end their working relationship at the end of the month," the Bundesbank said in a statement released on Thursday evening.

"I have asked the German president to relieve me from my post as Bundesbank board member after Sept. 30," Sarrazin confirmed, speaking at a reading he was giving in Potsdam near Berlin. He said that the Bundesbank's board had withdrawn the accusations it had made against him claiming that he had made discriminatory remarks about foreigners and had also withdrawn its request to German President Christian Wulff to relieve him of his duties.

Sarrazin's move is likely to also come as a relief to Wulff, who will be spared from making the uncomfortable decision as to whether Sarrazin should be removed from his position. Lawyers had raised doubts as to whether the dismissal would have stood up in court in the event of an appeal by Sarrazin. The issue was regarded as the first big test for Wulff, who was elected president in June, because no matter whether he chose to dismiss Sarrazin or not, his decision was sure to be criticized.

"The president will agree to Mr Sarrazin's request and welcomes the solution that has been agreed with the Deutsche Bundesbank," said a spokesman for Wulff. Officials at the Bundesbank said in a statement that they no longer held a negative view of Sarrazin's behavior and wish to make no further comments on the agreement.

Positions on the Bundesbank board are political appointments, and all nominees must be approved by the German president. In the 50-year history of the Bundesbank, however, nobody has ever been fired from a position on the bank's executive board, and there are no established legal procedures for such a firing.

Sarrazin's term on the Bundesbank board began in May 2009 and was officially supposed to end in 2014. He had previously been in charge of finances for the city-state of Berlin. He had courted controversy in that position, too, mainly through disparaging comments about German welfare recipients.

Sarrazin said on Thursday evening that he had been under "massive pressure" during the past two weeks. "It was not easy for me." He had asked himself whether he could really afford "to take on Germany's entire political class," he said. "No one can cope with such a situation in the long run." Now he would be able to appear at events without people seeing him as a representative of the Bundesbank, he said.

On Thursday of last week, after a long delay and under massive political pressure from Berlin, the Bundesbank's board had submitted a request for Sarrazin's dismissal -- the first of its kind in the bank's history. The board had claimed last week that Sarrazin had damaged the reputation of the Bundesbank with his provocative theses and had violated his duty to act with the decorum appropriate to a board member.

Sarrazin's provocative statements about the alleged lack of integration of Muslim immigrants in Germany and other issues had brought him fierce criticism. He had said in an interview that all Jews shared a particular gene, and also claimed that Germany was being overrun by foreigners who were less intelligent than Germans.

Surveys have shown that many ordinary Germans support Sarrazin and his provocative ideas. However, the leaders of Germany's mainstream political parties have spoken out strongly against his book and his many controversial theories. The center-left Social Democratic Party, to which Sarrazin belongs, has initiated proceedings to expel the outspoken author from the party.

Around 150 people had protested outside the Potsdam venue where Sarrazin held his reading on Thursday, calling the author a "racist" and holding up placards reading "shut up." Sarrazin received repeated applause from the around 750 people who had come to hear him read, however.

The reading, which took place under tight security, was the first in Sarrazin's book tour, after a planned kick-off event in Hildesheim was cancelled over safety concerns. The Potsdam reading was initially scheduled to take place in a different venue, but the location had to be changed after the original organizer got cold feet.

With reporting by Hendrik Ternieden 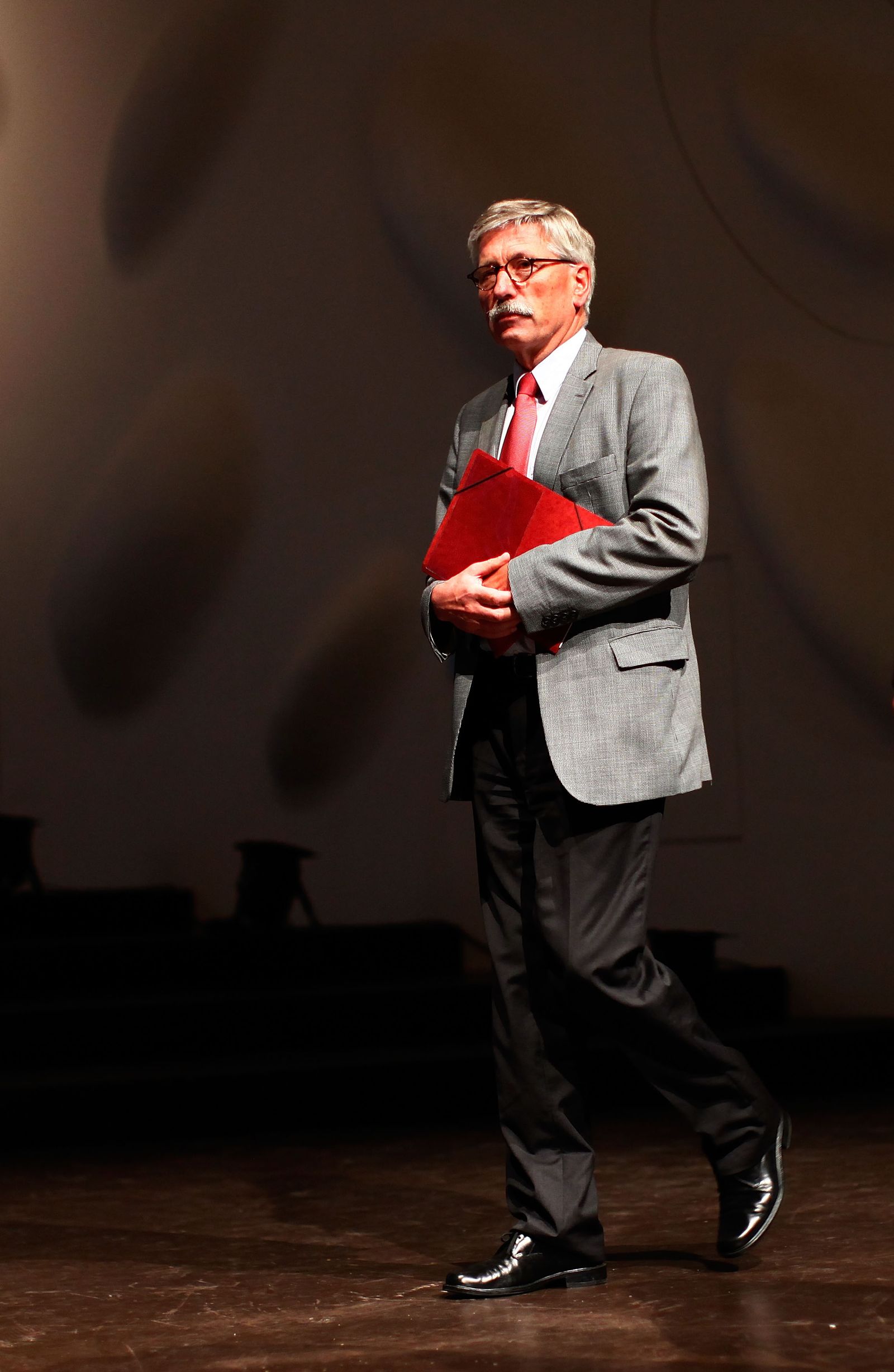 Thilo Sarrazin confirmed his resignation at a book reading he gave in Potsdam on Thursday evening.