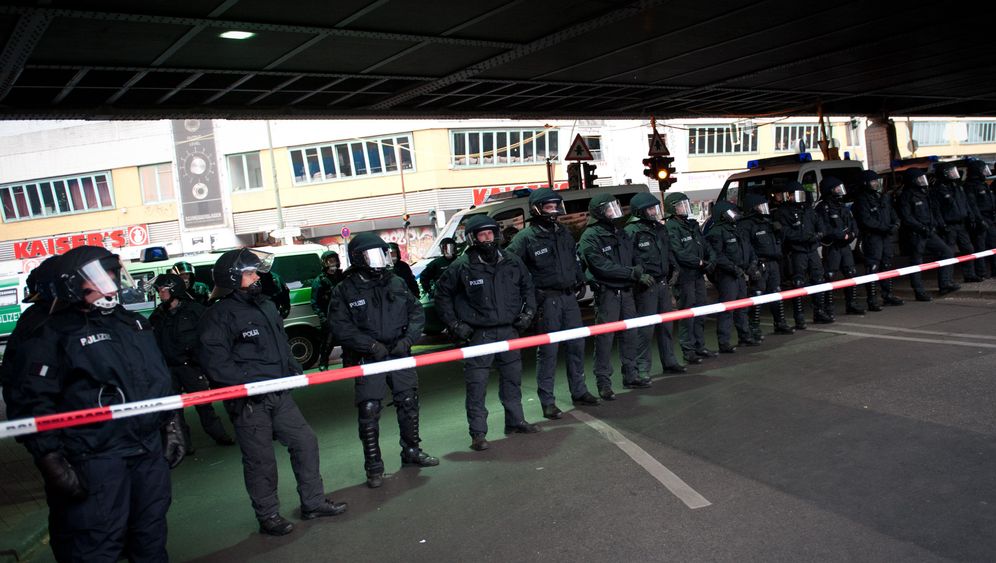 Photo Gallery: The May 1 Ritual of Riot

Packed streets lined with edibles; bumping live bands providing entertainment for the multitudes in the Berlin district of Kreuzberg; and police helicopters overhead keeping a close eye on the leftist demonstrations below. May 1, Germany's labor day, proceeded as expected in the capital on Tuesday. And it ended as expected as well: with rock throwing, garbage bins in flames and riot police chasing down would-be anarchists.

Police arrested several demonstrators on Tuesday evening, a number of police were injured and at least one had to be carried away from the violence. Bottles, rocks and fireworks rained down on police as they accompanied the Revolutionary May 1, as the demonstration is known, intended this year to protest climbing rents in the city. The escalating violence ultimately led officials to put a premature end to the march, which had been planned to continue to Berlin's government quarter. Several stores and banks were damaged by demonstrators.

Exact numbers of arrests and injuries are to be made public later on Wednesday. Some 10,000 people took part in the march.

Despite the violence, however, the interior minister of the city-state of Berlin, Frank Henkel, told daily Der Tagesspiegel that he was "mostly satisfied" with how the day went, adding that "most of the events were peaceful."

Demonstrations in Hamburg too turned violent on Wednesday, with 23 arrests made and five police injured. Some 1,000 officers were on hand to accompany the protest marches in the city.

The Berlin demonstrations this year continued the trend of recent years toward more fun and less rioting on May 1. Some 7,000 police officers from all over the country were in the capital to provide security and followed a strategy that has proven successful in recent years: that of staying largely out of sight, but reacting quickly and forcefully should violence break out.

The years 2008 and 2009 saw the last large riots in Berlin on May 1, with almost 300 arrests made in 2009 and 273 injured police. Two demonstrators were charged with attempted murder after they threw fireworks at police, but they were later found not guilty. The demonstrations in Berlin became famous for violence and chaos in the late 1980s, particularly the riots of 1987, which continued for two days.