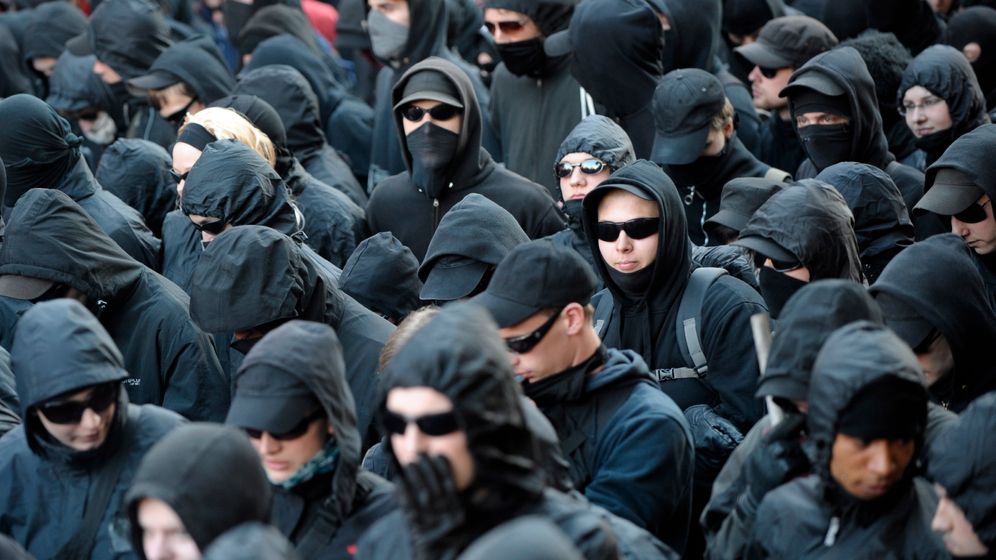 He calls himself Bill, though it goes without saying that it's not his real name. And he doesn't want any photos taken of his face. He is, after all, a left-wing extremist.

We are standing next to Kottbusser Tor metro station in Berlin's Kreuzberg district, in a trash-strewn square in the shadow of an elevated section of the subway. If things go as Bill and the rest of the German capital expects, stones and bottles will be flying here in a few days' time as part of the city's annual May 1 protests.

Bill is wearing cargo pants and a T-shirt bearing the slogan "Die Yuppie Scum." The T-shirt is the sign the tour group were told to look out for at the arranged meeting-point underneath the railway tracks. Two dozen people are waiting for him.

Bill says they'll set off in a moment -- after he's collected their money.

The Highlight of Spring in Berlin

Bill is a left-wing extremist who came up with a money-making scheme. He offers tours of the sites of "the famous May Day riots", sometimes in English, sometimes in German. Bill is American, so he finds the English tours easier to give. They also attract more people.

He hands out flyers advertising "revolutionary Berlin" and featuring a picture of Berlin's iconic television tower and a communist red star. The tour even has its own website and Facebook page.

Today's tour includes visitors from New Zealand, Ireland, Russia, and Italy. Their ages range from early 20s to early 30s. Many of them have recently moved to Berlin. They wear brightly-colored scarves and large sunglasses, but just for reasons of fashion, not to conceal their identity. None of them object to being photographed. The May 1 protests in Kreuzberg are simply another exciting aspect of their adopted home that they would like to find out more about.

It seems like the riots are the highlight of spring in Berlin. There are posters up everywhere, and the newspapers write about it on a daily basis. There are also quite a lot of Germans on the tour.

Bill says he usually charges 5 ($6.60) per person, but is willing to be flexible. He says he donates the money to a left-wing project, and that the tour itself is free of charge. After all, Bill is a Marxist, in other words an anti-capitalist.

Not as Radical as They Used to Be

Bill came to Berlin as a student eight years ago. He was in Kreuzberg for his first May Day protest seven years ago, and he's been coming back ever since. The day after last year's protest, his parents called. They said they'd seen a report about Kreuzberg on the news, and were worried about him. This is the anecdote Bill kicks off his tour with.

By the time we get to the Oranienplatz square, Bill has finished expounding about the background to the May 1 protests: squatters, the student movement, and student leader Rudi Dutschke, whose attempted assassination sparked riots in Berlin in 1968. Passing the offices of veteran Green Party politician Hans-Christian Ströbele, who was one of the lawyers that defended Germany's far-left Red Army Faction terrorists in court in the 1970s, Bills rails against him. Ströbele, he complains, is just like everyone else in Kreuzberg: not half as radical as he used to be.

Two young Turkish men pass by. "Hello, dear tourists!" they call out. Bill lights up a cigarette, and moves on to the events of May 1, 1987. He says it was just a peaceful street party until the police turned up with teargas. This triggered a spontaneous "Kiezaufstand," says Bill, switching for a moment into German -- a "neighborhood uprising." Angry citizens looted and burned down a supermarket, he explains. "That's the version I believe." At any rate, there have been demonstrations every year since 1988.

"What exactly are they demonstrating about these days?" someone asks.

"That always kind of depends on the political context," Bill replies. There are all sorts of grounds for revolutionary protest, he explains: repression, exploitation, war, etc. Or, to put it more bluntly: "It's all about the fact that capitalism is bullshit, and we're against the system."

Everyone looks at him, but no-one says anything. It's Marxism against capitalism, the people against the police. NATO and the Warsaw Pact may no longer be at loggerheads, but in every other way Germany seems to once again be a country in which the world can be reduced to the same simplistic dichotomy of a quarter-century ago: the battle between good and evil.

Bill, together with his fellow students, came up with the idea for the tour when he took part in a business start-up competition run by the university. He participated in the contest in order to subvert it, he says. His critical stance was based on the fact that the university was cutting costs, yet still had enough money to turn students into entrepreneurs.

Bill sees the tours themselves primarily as a political project, a way of explaining and promoting the revolutionary Labor Day protests. Some left-wingers were thrilled about the idea, though others complained that it was stupid bringing even more rubberneckers to Kreuzberg, which attracts so-called "riot tourists" on May 1 every year.

Bill takes a more pragmatic point of view. Tourists are going to come to the neighborhood whether he likes it or not, so it's better if they go around with him.

At Least Once in Your Life

The group reaches the far end of Mariannenplatz square as Bill reaches the end of his history of the May 1 protests. In his version, the pattern is basically the same, year after year: People demonstrate, the police attack the demonstrators, and violence breaks out. For the past few years, he says, the state has been staging large street festivals disguised as anti-violence demonstrations in an attempt to distract radical left-wingers from their political activism.

The tour group has seen the mosque that now stands where the supermarket was burnt down, as well as a left-wing café that was recently forced to close when the rent went up. The only question left is how this year's May 1 will turn out. Bill invites everyone to come to the demonstration. His advice for when things liven up: Stay cool and use your head.

Two British au-pairs start planning right away. They live with middle-class families in southwestern Berlin, and they're not certainly left wing. But as they put it, you need to have been to a May Day demonstration in Kreuzberg at least once in your life.

Translated from the German by Jan Liebelt
Verwandte Artikel