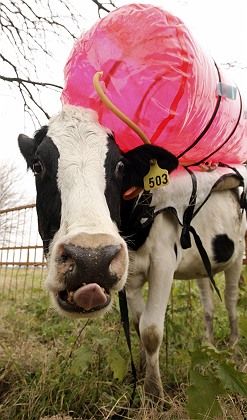 A cow being measured for emissions. Cattle may be gentle creatures but farming them is contributing to climate change, says consumer group Foodwatch.

For most people, it's the very picture of rural bliss, of a life in tune with nature and the wholesome world of farming: the happy cow standing on a lush meadow, calmly chewing its cud, a calf at its side.

But for Thilo Bode, the sight of this gentle-eyed creature is everything but reassuring. Bode, the head of German consumer protection organization Foodwatch, warns: "The cow is a climate bomb."

Whether they are raised conventionally or organically, one thing cows have in common is that they burp and fart to their hearts' content. Like all ruminants, cows are constantly emitting methane -- a greenhouse gas that is 23 times more powerful than carbon dioxide -- from both ends. As malodorous as pigs may be, it is the gaseous emissions of billions of cattle, goats and sheep that are contributing to global warming.

Bode wanted to find out just how strong the effects of the greenhouse gases methane, nitrous oxide and CO2 are. On Monday Foodwatch published a comprehensive study of the effects of agriculture on the climate, the first study of its kind that differentiates between conventional and organic farming. The scientists who conducted the study, with Germany's Institute for Ecological Economy Research (IOeW), accounted for both the CO2 emissions resulting from the production of feed and fertilizers, as well as the land requirements and productivity of various production methods.

The results are enough to send diehard fans of steaks and burgers into a panic. Even if all farms and methods, organic or otherwise, were optimized to reduce their effects on the climate, Foodwatch concludes that the principal approach to making agriculture more climate-friendly would require a drastic reduction in beef production. This would mean a radical increase in the price of steaks and the like. "It's time we went back to the days of the Sunday roast," says Bode.

But when it comes time to break the bad news to the average citizen, politicians are suddenly thin on the ground. Agriculture is the blind spot in the German government's climate protection policy. Farmers are for the most part exempt from an ambitious national program to reduce greenhouse gas emissions by 40 percent compared to 1990 levels by the year 2020, through methods such as better home insulation, energy conservation and the use of gasoline substitutes. Ironically, German agriculture is responsible for 133 million tons of CO2-equivalent emissions, bringing it close to the level of emissions attributable to road traffic (152 million tons).

Officials at the German Agriculture Ministry headed by Horst Seehofer, a member of the conservative Christian Social Union (CSU), offer a disarmingly simple explanation: It is "too difficult, from a methodological point of view," to measure the greenhouse gases that are emitted in connection with fertilizer application, the spraying of pesticides and herbicides, cattle digestion and the draining of wetlands. Meanwhile, the Environment Ministry has a completely different take on the matter: "We have exempted agriculture from the climate protection strategy in order to limit the number of potential sources of conflict," says a senior member of the staff of Environment Minister Sigmar Gabriel, a member of the Social Democrat Party (SPD).

Hans-Joachim Koch, who, until recently, advised the government in his former capacity as chairman of the German Advisory Council on the Environment, is even more direct when he says: "The lobby is well-organized." His successor, Martin Faulstich, agrees. "No one dares to say that we ought to eat less meat and more plant-based protein," says Faulstich, who has announced plans to commission a special report on agriculture.

The council is especially concerned about the loosening of environmental protection standards in the context of the planned Environmental Code. The Agriculture Ministry has managed to avert rules that relate to agriculture, such as a ban on draining wetlands. Now the draft legislation will be submitted to the German parliament, the Bundestag, after the summer break -- but without such proposals.

The results of the Foodwatch study clearly illustrate how important it is to include the farming sector.

The worst source of agricultural emissions, making up 30 percent of the total, is the draining of wetlands. The large amounts of CO2 trapped in the soil of wetlands are released when the land is used for farming. According to the IOeW study, the only way to stop these adverse effects on the climate would be to restore the wetlands. The resulting loss of land would have to be offset by doing away completely with the farming of crops for biofuels, a practice that is already considered questionable in terms of CO2 emissions, because of the large amounts of fertilizer it consumes.

But, in Foodwatch's assessment of the results of the IOEW study, organic agriculture is also not nearly as climate-friendly as many consumers believe. A complete conversion to climate-optimized organic farming, which requires more land, would reduce emissions by about 20 percent. However, this would be principally the result of not using nitrogen fertilizer, with its energy-intensive production and release of nitrous oxide in the fields. Nitrous oxide is 300 times as harmful as carbon dioxide.

If the amount of land being farmed stays at current levels, the result would be high productivity losses. There would have to be a 70-percent decline in the production of meat and milk. The beneficial effect on the climate would be achieved primarily by eliminating the number of cattle, rather than through the use of organic methods.

Organic farming also scores less favorably when it comes to fattening cattle. The organically raised bull has a less beneficial impact on the climate than his highly cultivated fellow cattle, even when feed production is taken into account. The organically raised bull needs more room and also requires traditional litter. This produces emissions, unlike the perforated floors on which highly cultivated turbo-cattle spend their short lives.

According to Foodwatch's analysis, this is where a conflict with animal rights groups is likely to arise. But one thing is clear: Anyone who believes that by buying a rib eye steak from an organic store they are automatically contributing to climate protection is mistaken.

The difference can be illustrated by drawing a comparison with automobile emissions. The production of one kilo of grass-fed beef causes the same amount of emissions as driving 113.4 kilometers (70.4 miles) in a compact car. Because of more intensive production methods, producing one kilo of conventional beef is the equivalent of driving only 70.6 kilometers (43.9 miles). 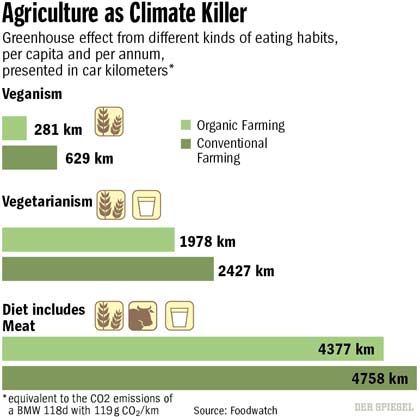 Vegans eat in a decidedly climate-friendly way. However, even opting to go without beef can significantly improve a person's carbon footprint.

But how do we convince farmers and consumers to produce and consume in ways that are easier on the climate?

According to Foodwatch, having the agriculture sector participate in emissions trading is not feasible. Instead, Foodwatch wants to see the European Union eliminate its agricultural subsidies and introduce emissions taxes and environmental duties. This would reward farmers for CO2-friendly production. Consumers would be the ones paying for the new system, with the (intended) result being a substantial increase in the cost of meat, milk and cheese.

Environment Minister Gabriel holds very similar views. In a strategy document, which is still confidential, Gabriel actively seeks conflict with the agricultural lobby. According to Gabriel, €40 billion ($26 billion) in agricultural subsidies can only be justified if the money does not end up harming the climate. He also wants to introduce an environmental inspection system that would prohibit the importation of feed produced in former rainforest areas. According to the Gabriel document, "we need a radical restructuring of subsidies." It argues that farmers should only receive payment for things that "have a positive effect on nature and the environment."

In expressing these views, the environment minister is placing himself squarely in opposition to Seehofer and taking sides with the Brussels Commission, which hopes to redefine up to 17 percent of agricultural subsidies as quickly as possible, from direct payments to farmers to agricultural climate protection.

On Tuesday Seehofer, who opposes the idea, met with federal and state agricultural experts in Bonn to finalize a packet of climate protection measures. The plan includes proposals for "more efficient fertilizing," new animals that release less methane and investment assistance for the purchase of "environmentally-friendly agricultural equipment." It also calls for a reduction in the amount of farmland in use.

In truth, the plan merely calls for actions that have long been required or approved on a voluntary basis. Concrete conservation goals are not specified, and there is no mention of reducing the number of cows.

Seehofer's senior staff members are only too aware that these measures are not enough to noticeably reduce greenhouse gas emissions. According to high-level ministry officials, a drastic reduction in greenhouse gases from agriculture can only be achieved if everyone consumes less meat, milk, cheese and yoghurt. But the same officials concede that this is something they neither wish nor have the authority to require anyone to do.

Seehofer's staff fear that imposing a climate tax on meat or milk would lead to a social and political outcry -- and to outsourcing of production overseas. For this reason, they argue, it makes absolutely no sense to choose this route.

But Foodwatch believes that this is the only reasonable approach, and it is not alone in its assessment. The World Wildlife Fund, Greenpeace and many experts hold similar views. The Federation of German Consumer Organizations wants to see both the agricultural sector and the Advisory Council on the Environment be included in climate policy.

The Greens favor a climate bonus, and their European Parliament member Friedrich-Wilhelm Graefe zu Baringdorf believes that a CO2 tax makes sense, as long as it is introduced for all industries. However, says Baringdorf, the tax should not be used to replace agricultural subsidies, and the subsidy system needs to be completely revamped.

Baringdorf, an organic farmer himself, says that a certain amount of restraint in meat production would be appropriate. "But let's be honest," he adds. "I don't believe that the world will come to an end because of cows burping and farting."