At the moment, factory halls 1 and 3 are echoingly empty. Several smelting furnaces sit idle in a hall that could hold several soccer fields. A worker in a red jumpsuit is painting the handrail of an emergency exit, in no particular hurry.

Soon, though, this factory on the shores of a lake called Silbersee, in the city of Neuss near Düsseldorf, will be swept up in something of a gold rush atmosphere. If all goes according to plan, the facility, which belongs to aluminum manufacturer Norsk Hydro, will once again be buzzing with activity early next year, with liquid metal sloshing through many of its 474 electrolysis furnaces for the first time in four years. 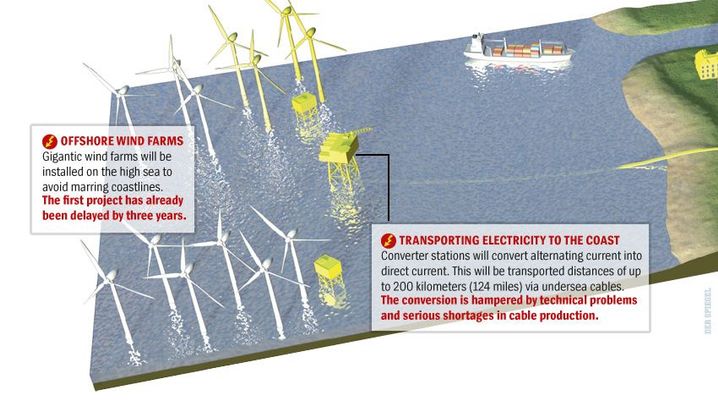 Photo Gallery: Into the Future without a Plan

The aluminum plant, also known as the Rheinwerk, is expected to employ 600 full-time workers again -- the hard years of slashed work hours are over. "Things are looking up here," company spokesman Michael Peter Steffen reports.

There's a minor economic miracle taking place here on the Lower Rhine River. Since the financial crisis hit in 2009, Norsk Hydro has produced just 50,000 tons of aluminum a year here at its Rheinwerk facility -- a fifth of its full capacity.

Today, however, the company needs its full staff back, to implement a plan to increase production to 150,000 tons annually. Quality and logistics factors played a role in the decision, Steffen says, but of course recent developments in German energy prices have been a boon as well.

That's certain. The industry's complaints may paint a different picture, but in fact the market price for electricity in Germany recently fell. Renewable energy sources, though more frequently known for driving up energy costs have actually played a not inconsiderable role in that change, by creating excess capacity at certain times, which in turn lowers the so-called spot price. For a big energy user such as Norsk Hydro's facility in Neuss, which consumes as much electricity as the entire neighboring city of Düsseldorf, such a development is a welcome one.

But there are additional factors at play. "The political situation around energy prices was another reason for our decision," Steffen says, referring to a number of tax breaks and subsides that the German government provides to large energy consumers.

There's a growing rift in this country. On the one side are companies such as Norsk Hydro, which get a whole series of tax breaks and benefits. On the other side are the many small and mid-sized businesses, known as the Mittelstand, which comprise a very significant portion of the German economy, that don't qualify for these generous exemptions.

Perfume retail chain Pieper is one company that falls into this second category. The company doesn't receive any benefits for the six gigawatts of electricity it uses, because its business activity is in the retail sector, rather than manufacturing. "Big industry takes itself out of the game, and we're the ones played for fools," complains Gerd Pieper, the head of this family-run business with more than 100 stores.

Meanwhile, the Edeka supermarket chain counts over 1,000 stores -- all with humming freezers and heaters running at every entrance to beat the autumn cold. "The burdens of the energy transition should be shouldered by everyone," says Reinhard Schütte, a member of the board of directors for Edeka AG. "It's time to put an end to these exemptions." By burdens, he is referring to the costs associated with the German government's ambitious "energy revolution" plans to phase out all nuclear energy by 2022 and for renewable energies to account for 80 percent of the electricity in the country by 2050.

Small- to medium-sized companies such as these are finding themselves in surprising solidarity with private energy consumers, who now pay more than 25 euro cents ($0.32) per kilowatt hour of electricity, with that price steadily on the rise. Industry pays 12.4 cents per kilowatt hour, according to Eurostat. Within the 27-member bloc, only Danish households pay more than Germans, with electricity costing an average of 29.8 cents for kilowatt hour compared to the EU-wide average of 18.4 cents. By comparison, the average price per kilowatt hour of electriticity in the United States in 2011 was 11.8 US cents (9.12 euro cents) for residential customers, $0.102 for commercial enterprises and $0.0688 for industry, according to statistics provided by the US Energy Information Administration.

This imbalance then ends up doubled and tripled, because the savings made by major industrial players show up instead on the bills of private energy consumers. Then there's the fact that big consumers such as steel mills draw their electricity from the spot market at the European Energy Exchange (EEX) in Leipzig, where major consumers from the industrial sector pay just six cents per kilowatt hour.

The current debate over the relative fairness of this system began in response to an increase in the contribution German energy consumers pay to cover the higher costs of producing energy from renewable sources. As stipulated by Germany's Renewable Energy Act (EEG), these costs are passed on to energy customers at a cost of 3.6 cents per kilowatt hour this year. But next year, that amount will rise dramatically to 5.28 cents. For the average household, that amounts to an increase of at least €50 annually. Edeka as a whole will pay €170 million this year and €250 million next year.

Uwe Leprich, the head of the non-profit energy technology research institute IZES, is critical not only of the government, but also the opposition parties, including the environmentalist Green Party and the far-left Left Party, when it comes to assigning blame for the price hikes. "It's a grand coalition working to relieve industry of its burdens," he says.

It's certainly true that over the last few years the German government has created a nearly impenetrable network of tay breaks, subsidies and fee exemptions in the energy sector, mainly with the goal of keeping Germany's large-scale industry competitive. The basic idea was a sensible one, Leprich says, but now the number of players getting a free ride in the system has gone far beyond reasonable.

Fully half of all energy consumption in Germany is now accorded special status or allowed to waive fees, he says, and the ones who lose out the most are small and mid-sized companies, whose energy bills increase all the more as a result. "This sends a devastating message," Leprich concludes.

The main reason for the increase in energy costs is the simple fact that generating electricity with wind parks and solar arrays is more expensive. But allowing so many exemptions is taking its toll as well, and a better solution is overdue -- especially because this envious discussion over who's paying and who's not has the potential to chip away at support among the general public for the transition to renewable energy.

Consulting firm Arepo Consult calculates the total cost of such discounts and tax breaks to be over €9 billion this year. The majority of that is the result of a 1999 environment and tax law implemented by the government coalition of the center-left Social Democratic Party and the Green Party in power at the time. Various perks for business created by that law amount to around €5 billion.

It is also possible for energy consumers to receive an exemption on another tax -- one which funds the construction of new power grids. Even golf courses can qualify. The total cost of this particular discount is €1.1 billion, according to Germany's Federal Network Agency, the country's energy regulator. This week the Higher Regional Court in Düsseldorf began hearing a test case against this law.

Initially, only businesses with a particularly large energy cost burden, especially those competing internationally, were supposed to enjoy this privilege. Yet the exemption is also used by furniture companies, ceramics manufacturers and mining companies that could hardly be said to meet these conditions. The German Environment Ministry notes that there is a "trend toward businesses improperly claiming" the exemption.

A recently leaked Environment Ministry report describes "increased creativity" in the business sector when it comes to saving on energy costs. In other words, companies are cheating and fibbing like there's no tomorrow.

One industry insider relates that large-scale bakeries and chemical plants sometimes run their equipment at full power even when it's not needed, in order to reach the 1 gigawatt hour of electricity by the end of the year that is the minimum in order for companies to apply for a waiver from the government's green energy tax.

With just a bit of finagling, even businesses for whom the exception was not in the least intended can work their way into it. One example is Deutsche Telekom, which consumes 3,200 gigawatt hours a year. Ten percent of that, a not insignificant 320 gigawatt hours, are partially exempt from the EEG contribution, because those gigawatts are provided by a wholly owned Deutsche Telekom subsidy called Power and Air Condition Solution Management.

Such news is giving even Environment Minister Peter Altmaier pause. "I'm very much in favor of taking a close look at possible undesirable developments," says the Christian Democratic Union politician, adding that it would also be worthwhile to have a hard look at the so-called "Eigenstromprivileg," or "self-produced energy privilege." This rule exempts from the EEG contribution any electricity that a company produces for its own use, and this too has given resourceful businesses plenty of ideas.

Take the example of steel manufacturer Saarstahl, which was quite active on the energy market in the summer of 2011. In Ensdorf, birthplace of Environment Minister Altmaier, Saarstahl AG leased one block of an aging coal-fired power plant, instantly qualifying itself for the self-produced energy privilege and saving the €25 million it would otherwise have paid as its EEG contribution.

Law-abiding mid-sized business owners such as Gregor Götz can only marvel at such inventiveness. Götz's company Vowalon produces laminated textile materials used, for example, in car seats. The process requires a great deal of energy -- 5 gigawatt hours. But it's Götz's bad luck that he fails to meet another condition that would qualify him for a reduction to his EEG contribution, which costs him €180,000 a year. "Energy costs don't make up 14 percent of our added value," he explains.

Götz doesn't want to keep paying the €180,000 EEG contribution. "But I don't want to engage in that kind of trickery," he says -- even though energy consultants contact him frequently with such ideas. "I'm not getting involved in that sort of lunacy."

Now Götz is taking his case to the regional court in Chemnitz and a hearing is expected to take place this year. The businessman will present a simple case to the judge in Chemnitz: "My competitor in France pays as much for a kilowatt hour as I pay for the EEG contribution," he says.

3 Bilder Photo Gallery: Into the Future without a Plan