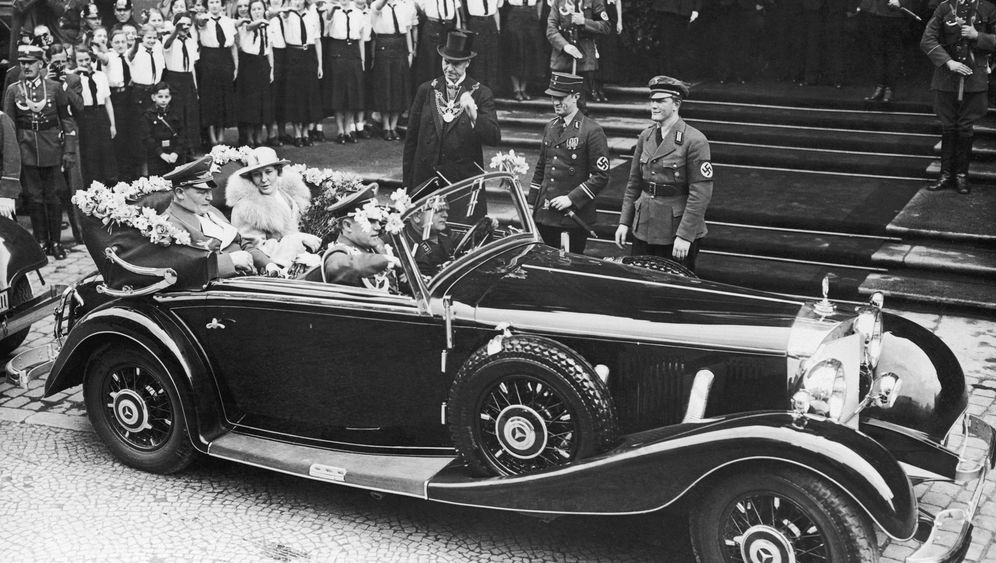 The Mercedes-Benz 540K cabriolet is an absolute rarity, with fewer than 200 manufactured before 1939. Now, one of the huge, eight-cylinder convertibles has turned up in the US state of North Carolina. "The car is worth several million dollars," says David Rathbun, one of its current owners. The steep price is not only due to its rare status, though. It also allegedly has a unique historical background -- the owners believe that during World War II, the convertible belonged to Hermann Göring, one of the leading members of the Nazi party.

Göring was the commander-in-chief of WWII Germany's Luftwaffe, or air force. He was also responsible for the construction of several concentration camps. According to its owners, Göring used the vehicle during Nazi parades, which is why the car has several special features: not only is its back seat longer than usual, the car also has a small platform on the passenger side, where Göring was able to stand during rallies.

There are documents confirming the story: a letter from Daimler dated September 30, 1953 states that a car with the same serial number "was sold to Reichsmarschall Göring on July 21, 1941." Rathbun, who buys and sells vintage cars alongside his business partner Steve Saffer, had the documents sent to the States from the Mercendes-Benz archives.

According to Rathbun, further US military documents reveal the story of the car's journey across the Atlantic. It seems the vehicle was confiscated by the US Army near Hitler's residence in the Bavarian Alps just days before the war ended. US Army Colonel John A. Heintges subsequently used it as his own private vehicle. Photos taken at the time indicate that Heintges promptly gave the car a new paint job -- its hood and doors were adorned with the star-shaped symbol associated with the 7th Infantry.

The convertible soon changed ownership again, the documents reveal, with another high-ranking member of the US military having it shipped to Texas several years later. From 1958 onwards, the car was owned by a man named Dick Taylor in North Carolina. It was by chance that Rathbun and his partner became aware of the car and its unique history, they say, and it wasn't until May that they were able to locate Taylor and negotiate a deal. Rathbun refused to reveal the purchasing price.

An employee of Mercedes-Benz Classics, which specializes in the company's classic car range, has reservations about the authenticity of the vehicle, though. Excerpts from the company archives in 1941 that show the the car was ordered by the Luftwaffe are genuine, the employee says. "But we can't confirm whether the car really belonged to Göring himself." Photos of the vehicle aren't enough to prove the owners' assertions.

"Clear evidence is still missing," says the Mercedes employee. "Our statements could influence the ultimate selling price of the vehicle, so we would rather not confirm such claims." This stance is common at the company. When it comes to cars that have supposedly been in Nazi ownership, the car manufacturer is doubly cautious.

Questions about whether the documents from the Mercedes archive actually belong to the vehicle in North Carolina also remain unanswered. Though the car manufacturer does offer its expertise in such cases, a thorough investigation into the matter would cost some €15,000 ($20,000).

Such an investigation would involve comparing the vehicle's serial numbers -- inscribed on the motor and on the car's exterior -- to those indicated in the documents. The company would also have to remove a coin-sized piece of the hood and have it sent to its Fellbach-based laboratory for examination. "In this way, it is possible to determine when the material originated," says the Mercedes employee.

The subsequent report, which is usually handed to clients in a leather-bound book, would provide air-tight proof of the vehicle's authenticity. According to David Rathbun, the company offered to conduct such an investigation on his behalf -- a service he is likely to take advantage of -- but the parties haven't yet agreed on exactly how to carry out the procedure. "Progress has been halting," he says.

Rathbun and his partner are hoping to attract investors to finance a restoration of the vehicle, regardless of whether or not they receive Mercedes' seal of approval. Though Rathbun claims that the car is completely intact, and that the motor is in working order, the car's long history has certainly left its mark. "It would be best if the car was taken apart completely and then reassembled," he says. The rust has to be removed, and damaged upholstery replaced. The cost of such an endeavour is hard to estimate.

Once the car has undergone restoration, it will be exhibited at car shows and ultimately be "put into the right hands," Rathbun says.

Rathbun's partner is Jewish, and the pair don't want the vehicle falling into the hands of a Nazi memorabilia collector. After the war, Göring was found to have been instrumental in engineering the Holocaust and convicted of crimes against humanity at the Nuremburg Trials. If Rathbun and his partner are able to find an appropriate owner, they want to donate some of the proceeds to a Jewish charitable foundation.