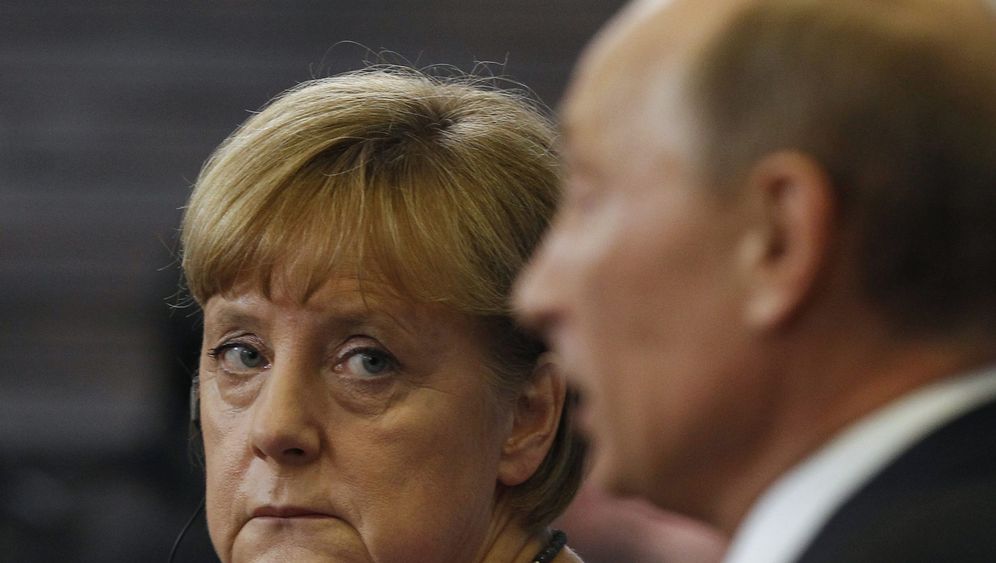 Last Monday was a day of historic comparisons for Angela Merkel's Christian Democratic Union (CDU). Immediately prior, almost 97 percent of voters on the Crimea Peninsula had voted in favor of joining Russia, an outcome that reminded the chancellor of the East Germany where she grew up. "Every result over 90 percent in this world has to be viewed with skepticism," Merkel said. After a brief, dramatic pause, she added: "With the exception of my election to the party chairmanship, of course."

Her comment was greeted with laughter, but it would remain the only buoyant moment that morning. The focus of the meeting was squarely on Russia and the crisis in Ukraine. Hesse Governor Volker Bouffier spoke of the West's "distressing helplessness" in the face of Russia's annexation of Crimea and said he was reminded of the year 1938 when the world did nothing to prevent Adolf Hitler's takeover of the Sudetenland in what was then Czechoslovakia. CDU General Secretary Peter Tauber, who holds a Ph.D. in history, pointed out that, just as now with the Winter Olympics in Sochi, there had been an Olympics prior to the Sudetenland seizure: 1936 in Berlin.

They are comparisons that lead to only one possible conclusion: Europe must stand up to Russian President Vladimir Putin: no appeasement, a stern response. Until the Crimea referendum, Merkel had charted a completely different course for Germany in the Ukraine crisis; she had sought to work closely with Moscow in an effort to avoid a direct confrontation. But once Putin annexed Crimea, Merkel was forced to take an uncharacteristically hardline approach. Normally happy to wait and observe as a situation unfolds, Merkel went on the offensive last week, telling German parliament that "without a doubt, economic sanctions will be considered" should the situation become more critical.

For a chancellor who prefers to move slowly, it was a strong statement. For a leader who famously likes to think things through to the end, it was a confusing one. What, exactly, is her strategy? In levying sanctions, it is vital to have a clear understanding of your adversary and what goals he is pursuing. And it is important to have more patience. Does Merkel believe that the mere threat of painful economic sanctions will prevent Putin from sitting down to a meal of eastern Ukraine after his Crimean appetizer? Or is she really prepared to pursue the spiraling logic of sanctions? Whether she wants to or not, Merkel has to dance with the Russian bear. And it is unclear who has the lead.

The situation is an uncomfortable one for the German chancellor. But several telephone calls with the Russian president in recent weeks have led her to the conclusion that there is no other option at the moment. Even as the lines of communication to Moscow remain open, travel bans have been issued, accounts have been frozen and targeted economic sanctions have been prepared. The international community is isolating Russia.

On Friday evening, the Chancellery saw the first positive effects of Merkel's clear path on Russia. After days of back-and-forth over a possible observer mission by the Organization for Security and Co-Operation in Europe (OSCE) for Ukraine, Moscow finally agreed. It was interpreted as a reaction to Western pressure. The determination and unity showed by the US and EU surprised Moscow, it was said.

But Merkel's path is not uncontroversial, neither within her governing coalition with the center-left Social Democrats nor within her own party. "If we levy economic sanctions and we are the ones most affected in the end, then they serve nobody," said Armin Laschet, deputy head of the CDU. Unsurprisingly, the German business community likewise believes that sanctions are the wrong approach. It is difficult to calculate their true costs and the price tag of an EU effort to provide financial assistance to Ukraine is likewise hard to estimate. One billion euros alone will be needed to stave off an immediate Ukraine insolvency.

And then there are the voters. Merkel knows that Germans are not fond of risk taking, no matter whether the issue is social security reform or a confrontation with Russia. Her election victory last autumn was partly the result of her promise to protect Germany from unpleasantness related to the euro crisis. That is what they are now expecting from Berlin's course on the Ukraine crisis: security and stability.

Thus far, according to a new survey conducted on SPIEGEL's behalf by pollster TNS Forschung, 60 percent of respondents consider the West's response to the crisis to be appropriate. Earlier surveys, however, have shown that more than two-thirds of Germans are opposed to economic sanctions, which would be the next level of escalation. And 55 percent of Germans have sympathy for Putin's view that Ukraine belongs to Russia's sphere of influence. Almost as many believe that the West should simply accept Russia's annexation of Crimea.

Just how seriously Berlin is taking the crisis in Ukraine can be seen in comments made by German Defense Minister Ursula von der Leyen. The West, to be sure, has expressly ruled out taking military action. But NATO is considering an increased presence in the Baltic states on the border with Russia. "Now it has become important for alliance members on the periphery that NATO shows its presence," von der Leyen told SPIEGEL. "The current situation clearly shows that NATO isn't just a military alliance, but is also a political one."

The minister also defended the expansion of NATO to countries formerly belonging to the Eastern Bloc or the Soviet Union, an enlargement which Russia has heavily criticized. "It is first and foremost the democratic canon of values that has exerted such attraction on new members," she said. That is why NATO grew in the 1990s, she continued, and not because "the alliance made expansion a priority."

Still, it is the European Union and not NATO that will be taking the lead in crisis management in the foreseeable future. When Merkel met with her EU counterparts over dinner last Thursday, the major focus was Vladimir Putin, said participants. With obvious pleasure, those present at the summit related the mocking that Putin was subjected to, the ease with which his body language could be interpreted and the obvious pain Russia's lost power causes him. The latter point is one which Chancellor Merkel concurs with and she has long been closely observing Putin. But she has no prognosis for what might come next.

What will Putin's next step be? Will he annex Transnistria or South Ossetia? Will he instigate the Russian minority in the Baltics or in Kazakhstan? Sometimes Angela Merkel re-watches recordings of Putin's television appearances. She studies his body language and listens closely to the original Russian.

Merkel related to the CDU board last Monday that Nelson Mandela once told her: "I have to know how the other thinks." She then went on to describe the world from Putin's viewpoint. The Russians, she said, feel that the West has repeatedly put them on the defensive. It is an image that depicts post-Soviet Russia as the new kid in the class who initially tries to integrate -- to the West, modernity and democracy. But when he fails, he takes refuge in obstinacy and aggression.

Merkel is convinced that clarity and severity are necessary for confronting Putin. Those who offer no resistance fail.

She has taken note of how the Russian president has changed over the years. When he first rose to power, she saw the admiration he had for the West, his desire to modernize Russia's economy and to regain his country's superpower status. Now, only the latter has remained. His erstwhile admiration for the West has turned to scorn due to what he sees as its unrepentant relativism, its failure in Iraq and Afghanistan and the vulnerability it showed in the financial crisis.

In this crisis, the chancellor has had to concede that she underestimated Putin's determination. In February, Merkel still believed she could prevent Russia from annexing Crimea. Last week, she warned European leaders behind closed doors that Putin could not be trusted. She said he had lied to her several times and made promises that he then proceeded to break.

The contact group proposed by Germany early in the crisis to provide a channel for direct negotiations between Moscow and Kiev provides one example. Initially, Putin accepted the idea in a telephone conversation with Merkel. But after days of discussion on the issue, Russian Foreign Minister Sergei Lavrov suddenly announced that the idea was defunct. The OSCE observer mission seemed to be threatened with a similar fate at first. Although Putin agreed to the mission on March 16, the deal looked to be in danger last week until it was revived on Friday. Nobody, though, seems particularly confident that the agreement will last. During the Cold War, Kremlinologists would offer insight and analysis as to what the Soviet Union was thinking and planning. Now, Berlin is desperate for a "Putinologist" -- the question as to how far the Russian president might go remains unanswered.

There are, however, some certainties associated with the Ukraine crisis, and high costs are among them, even if Europe ultimately declines to apply economic sanctions. Ukraine will have to be saved from bankruptcy. And that too is dependent on Vladimir Putin. Should the Russian state-owned natural gas company Gazprom demand payment of the more than €1.5 billion ($2.07 billion) it is owed by Kiev, the new Ukrainian government would likely be unable to pay, say sources in the Berlin government. Europe would have to plug the gap.

Budget experts in Germany's federal parliament are also taking a close look at the €11 billion aid package that the EU announced at the beginning of March. An itemization compiled by the Finance Ministry indicates where the money is to come from. Up to €1 billion will come in the form of a loan with a further €1.6 billion in development aid being provided from now until 2020. Finally, the European Investment Bank and the European Bank for Reconstruction and Development will provide up to €8 billion in additional loans.

Finance Minister Wolfgang Schäuble believes that the German budget will remain unaffected by the aid package. In contrast to the US, Berlin is not currently planning to provide direct aid to Ukraine.

But officials at the Foreign Ministry of Frank-Walter Steinmeier believe that up to €25 to €30 billion annually are necessary to provide Ukraine with a modicum of stability. Steinmeier's officials are also pessimistic when it comes to the deeply divided country's political future. The list of maladies runs from unchecked corruption to the country's instable currency to the significant amount of influence enjoyed by radical politicians, particularly on the far right. Some in the Chancellery have likewise begun using the term "failed state."

And the historical comparisons have continued. 2014 has been compared with 1914, Putin with Hitler and today's Russia with the Weimar Republic. One connection, though, has not been mentioned thus far: That between the chancellor and Catherine the Great. Merkel is known to have great respect for the Russian empress with German roots and her portrait graces Merkel's desk in the Chancellery. But what few people know is that Catherine the Great was responsible for conquering the Crimea in the 18th century. The peninsula was annexed into the Russian empire on April 8, 1783: "from now until the end of time." 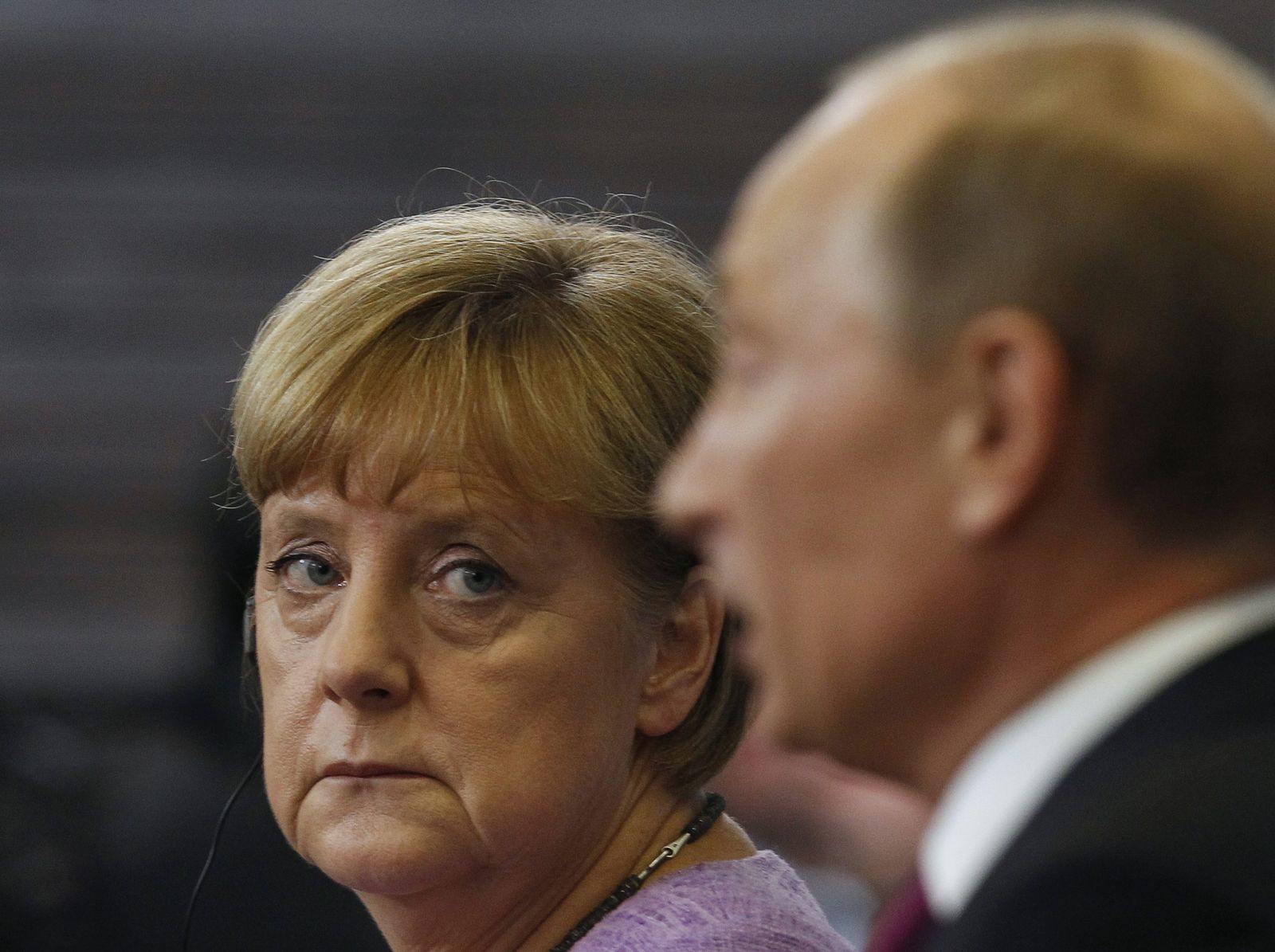 Chancellor Angela Merkel has spent many years closely observing Russian President Vladimir Putin and come to the conclusion that she must be forceful in her dealings with him. But even she doesn't know what he is planning to do next. 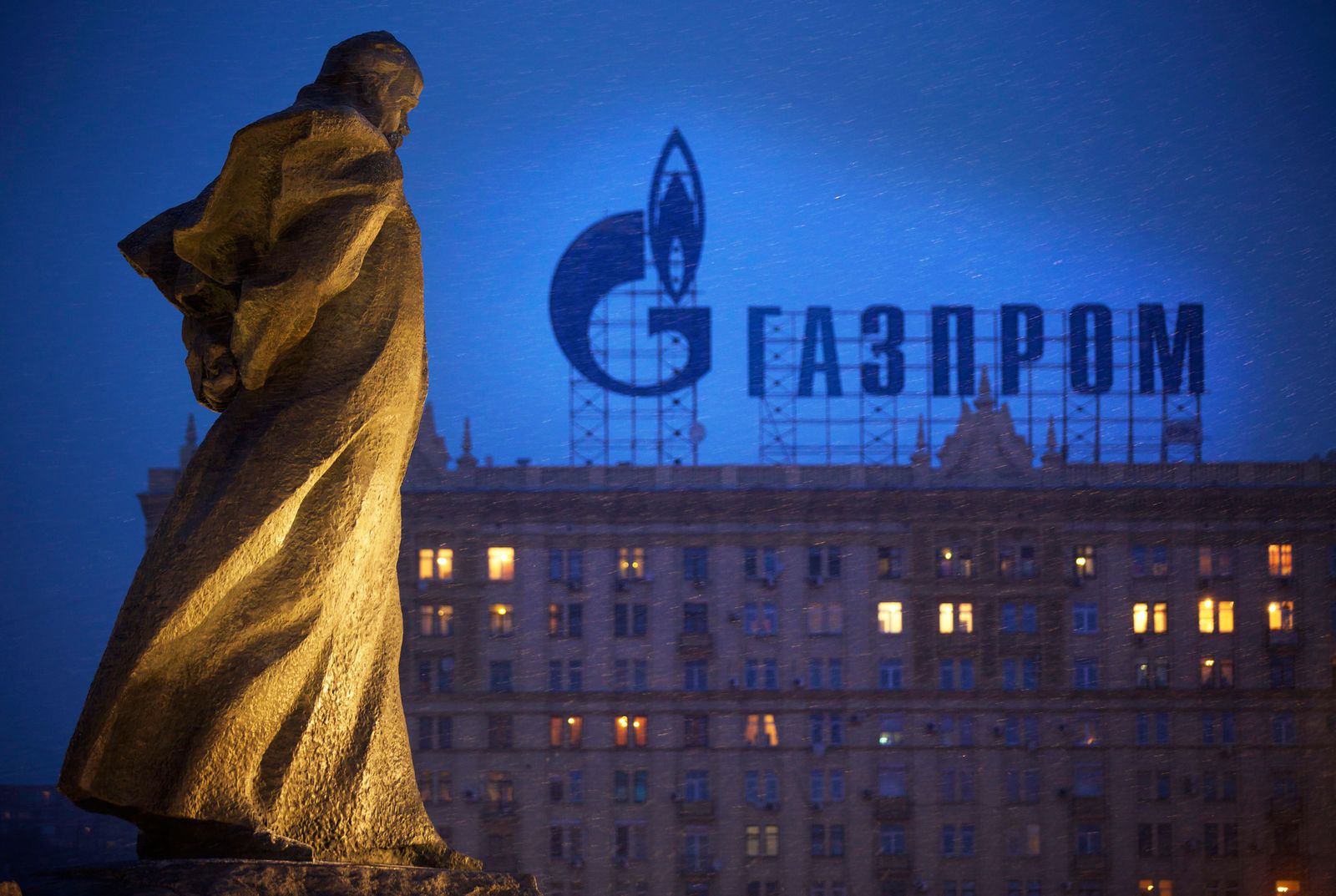 The question remains as to how far Germany and the EU will go in slapping economic sanctions on Russia. They could be costly for both sides.